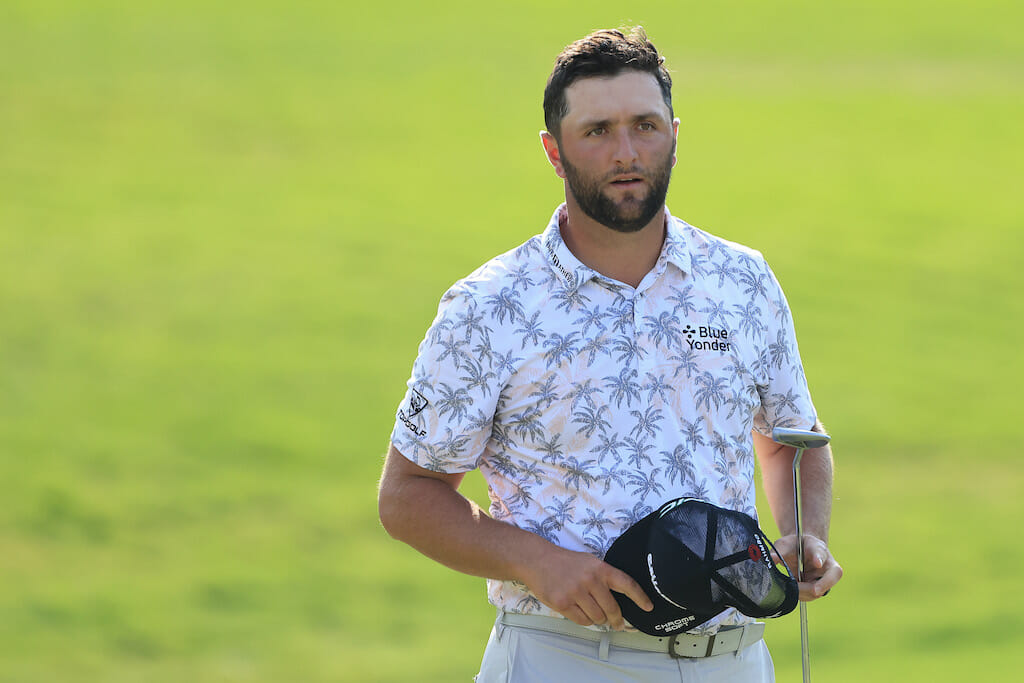 The Irish duo of Rory McIlroy and Shane Lowry have one last Memorial tournament competition round ahead of teeing-up in the June 17th commencing U.S. Open, but the story of Saturday in Ohio revolved around the most unfortunate, Jon Rahm.

First to McIlroy and it will be an opportunity to break 70 over the four rounds after scores now of 72, 72 and 71 for a no-frills one-under par tally on the Muirfield Village course in Dublin, Ohio. With a round to play, McIlroy is staring at a third year running, and also a fourth Memorial tournament in 10 appearances in ‘Jack’s Event’ since a debut in 2010, where he may not break 70.

The resulting delays following Thursday’s lightning show did mean McIlroy managing to complete his two opening rounds on Friday unlike Lowry, who had still had a handful of holes of his second round to play when darkness halted play on day two.

Lowry was was well in contention following an opening score of three-under par 69 and returned to the course early Saturday to complete his remaining six holes, with the reigning Open Champion pleased to birdie his 16th before he holed a three-and-a-half footer for birdie at his last for a 71 and a four-under par tally.

The effort left him trailing six shots behind fellow Dubai Duty Free Irish Open winner, Jon Rahm, the defending Memorial champion, who, like Lowry, also had a handful of holes of his second round to compete. Rahm bogeyed 14, his first hole on Saturday’s restart and then proceeded to light up the course; the World No. 3 aced the par-3 16th and then birdied 17 to finish with a 65 and take a three-shot leading cushion into the official day three of the $US 9.1m event completely unaware of what would transpire later that evening.

Mcllroy meanwhile was back in a distant share of 45th place but it was a one step forward, one step back start to his round with a birdie on two but a bogey at the next, and then a birdie on five but giving the shot back at the next. McIlroy holed an 11-footer for a birdie at the par-5 seventh hole and then produced six straight pars ahead of a fourth birdie of his round at the short par-4 14th in sending a five-footer to the bottom of the cup.

He was then back to one-under for his round in finding a back greenside bunker at the par-4 17th and taking three shots to get up-and-down for a bogey ‘5’. McIlroy agreed to speak to the waiting media post his round but there was no question on his round, instead the interview dominated by questions about Yuka Saso, the 19-year old Filipino who led the U.S. Women’s Open heading to the third round in San Francisco.

One of the questions to McIlroy about Saso was his reaction to her indicating she would love to meet McIlroy at next month’s Tokyo Olympics.

“Yeah. That would be cool. I would like to — yeah, the Olympics, like who knows how it’s going to be or what’s going to happen,” he said.

“With Hideki doing what he did at Augusta, it’s a really strong golfing nation, Japan, obviously having, maybe having her as a major champion going in there, who knows. It would be really — it would be really cool. It’s just a shame it’s not going to be like a normal Olympics. It will still be cool.”

McIlroy’s answer had the hint that he thinks Saso is Japanese but she’ll be proudly representing her beloved Philippines. A few hours later, Lowry headed to the scorer’s hut with a scorecard sporting five birdies, three bogeys, including one at the last, along with a ninth hole double-bogey. Lowry birdied the four par-5s and with his other birdie in sinking a four-footer at the par-4 second hole. His third round 72 left him lying at four-under par and just outside the top-10.

Then the tournament flipped on its head. Second round leader Rahm would go on to extend his lead to six shots with a sublime third round 64 as he continued to saunter towards a second straight title at Jack’s place at a whopping 18-under par. The Spaniard was in vintage form, wholly dominant and odds-on to become the first player to go back-to-back at the Memorial since Tiger Woods. But on the 18th green on Saturday, Rahm was approached by an official and something was whispered in his ear that clearly upset him. As it turns out, Rahm had tested positive for Covid-19.

Thoughts after today’s round pic.twitter.com/gWkBAWE42F

“Jon Rahm was subject to contact-tracing protocols, as he had come in close contact with a person who was COVID positive,” the statement from the PGA Tour read. “Per the Tour’s COVID Health & Safety Plan, Rahm was given the option to remain in the competition and enter our tracing protocol, which includes daily testing and restricted access to indoor facilities. Rahm has remained asymptomatic.

“Rahm has tested negative every day, but his most recent test – which was performed after the conclusion of his second round (rain delayed) and before the start of his third round – returned positive at approximately 4:20 pm ET while Rahm was on the golf course.

Rahm’s withdrawal leaves Collin Morikawa and Patrick Cantlay sharing a very dubious lead at 12-under par. Cantlay played with Rahm on Saturday and will undergo a Covid test alongside the third man in the group, Scottie Scheffler. It’s not yet known if they’ll be allowed to tee-up for the final round.