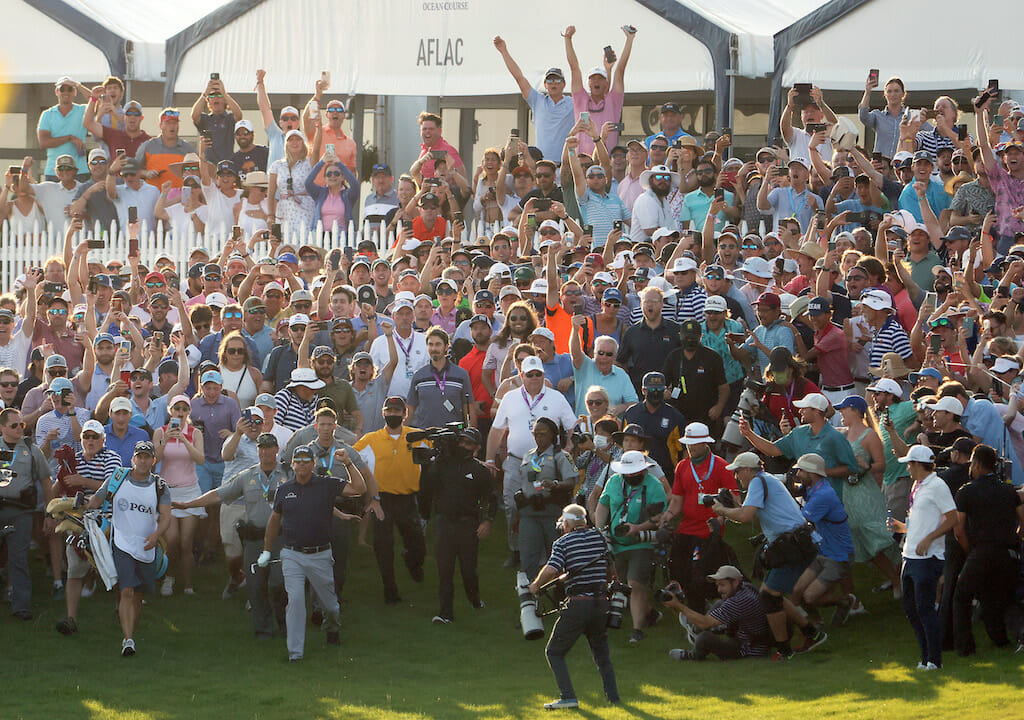 R&A CEO Martin Slumbers has declared that there will be no repeat at this year’s 149th Open Championship of the unruly spectator behaviour that unfolded last Sunday at the PGA Championship.

It seemed all of the 10,000 spectators allowed into the final round found their way onto the 72nd fairway to follow Phil Mickelson and Brooks Koepka at Kiawah Island.

Mickelson, who became the oldest winner of a men’s major championship said at the time that he found the experience ‘slightly unnerving but exceptionally awesome’ in winning by two shots to also capture a ninth major championship title. Koepka was more outspoken in suggesting spectators may have sought to deliberately ‘ding’ his still injured right knee on route to sharing second place.

Slumbers was asked about the events that unfolded last Sunday in a Zoom conference call with reigning Open Champion Shane Lowry.

“No, for The Open we will absolutely be holding back spectators behind the barriers that we have and let the players have the freedom to move and play the final hole,” said Slumbers. “It’s very important for us, especially as we might have to use it straight after if there’s a play-off. So we’re very conscious about keeping that space safe and clear.

“I would say at Portrush when we got to the presentation ceremony it was quite difficult to control those fans who were sort of trying to get on to the 18th green,” he said, as Lowry smiled on screen. “So it’s a balance between getting the enthusiasm and the safety and making sure the camera pictures are all right, but the 18th fairway will be clean come July.”

Following the scenes last Sunday on the 72nd hole of the Ocean Course, Slumbers opposite number at the PGA of America has issued an apology:

“While we welcome enthusiastic fan engagement, we regret that a moment of high elation and pent-up emotion by spectators during the conclusion of yesterday’s historic PGA Championship briefly overwhelmed security and made two players and their caddies feel vulnerable,” said Seth Waugh, the PGA of America CEO, in a statement.

“We always put player safety at the top of our list and are grateful that order was restored. I have spoken to both players and apologised on behalf of the Association.”