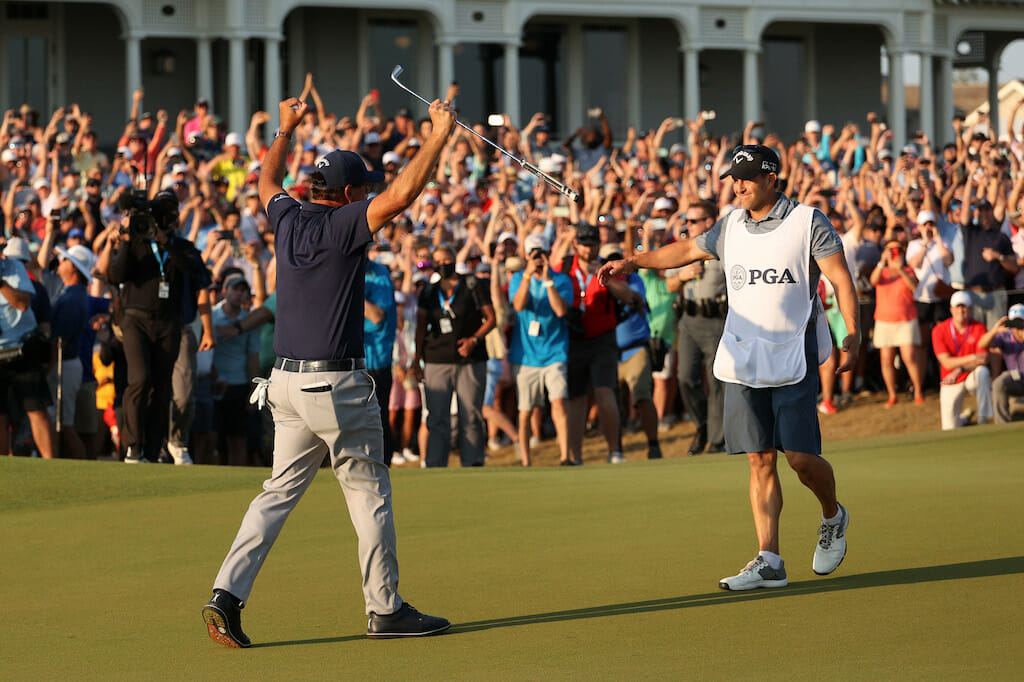 Phil Mickelson is hopeful his magical US PGA Championship victory at the age of 50 will inspire others to work hard in the belief that age is no barrier to success in the game of golf.

‘Lefty’ claimed his sixth Major title and a second Wanamaker Trophy at the age of 50 years, 11 months and 7 days, becoming the oldest Major winner in history and first player to win a Major after the age of 50. Entering the final round with a slender one-stroke advantage over playing partner Brooks Koepka, Mickelson relinquished his lead with a bogey at the opening obstacle to Koepka’s birdie but when Brooks doubled the second and Mickelson made a birdie in ‘4’, order was restored.

Mickelson dropped another shot with a nervy green-side chip on 3 but just when you thought Koepka was going to pull level, he let a golden opportunity slip by the hole for birdie from just three feet. It would prove the story of the final round with Koepka a shell of his four-time Major winning self from the seventh to 13th holes where he’d drop four shots, while Mickelson, buoyed by his playing partner’s struggles, played the same stretch in one-under.

It left Mickelson clear down the closing holes and with the field unable to apply pressure, the fate of the title would be determined by Mickelson’s ability to handle his own internal stresses. There were slight wobbles on 14 and 17 but a birdie in between on 16 provided ample cushion. Mickelson and a boisterous South Carolina crowd could enjoy the walk down the 72nd with shots to spare. Phil’s a Major winner once more, eight years after lifting the Claret Jug, though this one’s all the sweeter given the amount of people who said it was impossible.

“I mean, this is just an incredible feeling because I just believed that it was possible but yet everything was saying it wasn’t,” Mickelson reflected. “I hope that others find that inspiration. It might take a little extra work, a little bit harder effort to maintain physically or maintain the skills, but gosh, is it worth it in the end, and I’m so appreciative to be holding this Wanamaker Trophy.”

Thirty years after lifting his first professional title at the 1991 Northern Telecom Open as an amateur, Mickelson has reinvented himself at the ripe old age of 50. His win proves age is just a number, and if you don’t believe that, just look at some of the numbers, not least, the par-5 16th on Sunday.

With the bulked-up Koepka ripping a drive 361 yards down the middle of the fairway as he looked to apply belated pressure to Phil’s title charge, Mickelson, twenty years his senior, bombed one five past Koepka. This is no ordinary 50-year old. Mickelson fasts 36-hours a week. He lifts weights, hits bombs, cultivates calves. Mickelson is a well-oiled machine with five more chances to complete a career Grand Slam at the US Open. What keeps him motivated?  Well, aside from the $2.16million cheque:

“I just love this game of golf, and I love what I do, and I love the challenge of competing against such great players,” he said. “I mean, what an incredible competitor and tough player Brooks Koepka is, and to have a chance to play in the final group with him was an exceptional honour.

“It’s been really fun for me to see his development. I remember playing a practice round with him in 2013 at Oak Hill PGA Championship, first time we ever played together, and seeing the way his game has developed, and what a tough player he is. It was a really difficult task for me to go head-to-head and come out on top and I’m appreciative of the opportunity.”