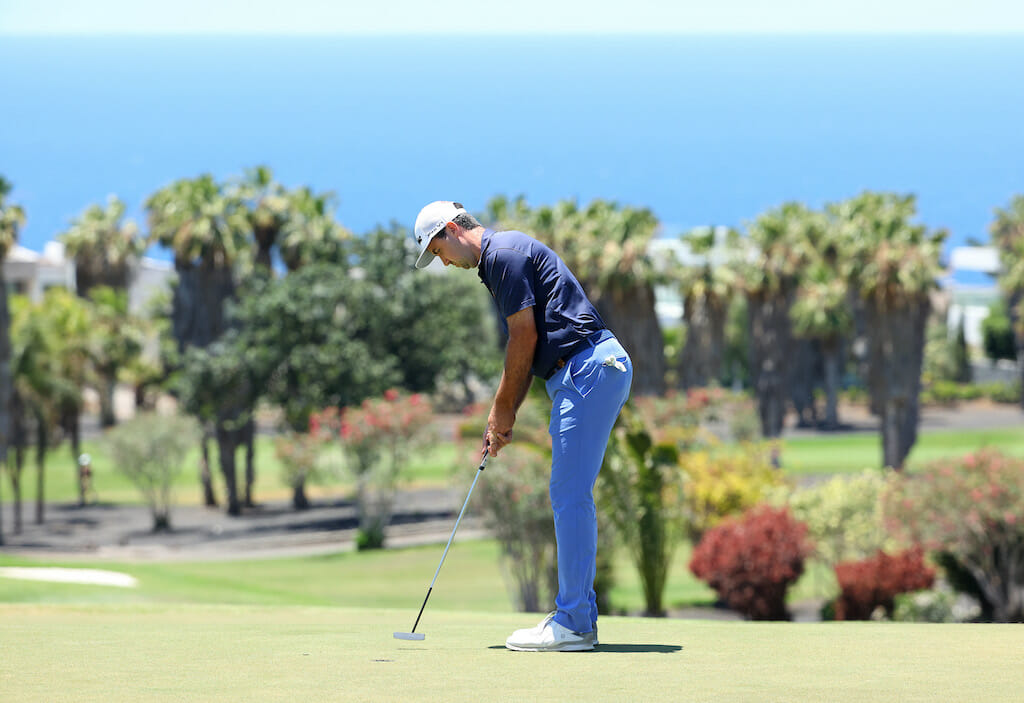 Niall Kearney hailed his Sunday 61 at the Canary Islands Championship as a massive boost to the confidence as he came of age on the main stage of European Tour golf with a course-record equalling 61 in Tenerife.

The Royal Dublin professional was on 59 watch for much of the afternoon, 10-under par through 16 holes on the par-71 Costa Adeja course after firing nine birdies and an eagle to bolt to 19-under par.

“I was sticking to my process,” said Kearney, a mantra that’s worked wonders for him all week as he spoke post-round from the clubhouse where currently sits in a tie for third with players yet to complete their final rounds.

“I knew I was there or thereabouts within the leaderboard but nine is such a tough second shot, it’s such a long shot, the pin is at the top of the ridge and it’s very difficult to get at so par is always going to be a very good score there.”

Two pars it would be for a Tour low number for the now 33-year old and a full eleven shots better than his moving day 72 that ended any title aspirations come Sunday.

“I don’t know what’s happened the last couple of Saturdays, I’ve just had really slow days,” Kearney admitted. “There was no reason for it yesterday because I got off to a good start but I feel as though my game has been quite good the last three weeks and I felt as though something was brewing but it just wasn’t quite coming through so it’s great to shoot a round like that today, it gives me a lot of confidence going forward.”

Confidence, and opportunity, with Kearney rewarded with his place in next week’s Betfred British Masters at the Belfry. What was meant to be a season largely competing on the secondary Challenge Tour, Kearney has not only been afforded Main Tour starts but he’s taken full advantage of them.

“We’ve been watching the category list over the last week or so to see where we sit so it was always going to be tight through the category list – I might’ve just scraped it – but it’s great to get in on merit now. It gives me confidence as well going into it,” he said.

As for fond memories of The Belfry, where former Masters Champion Danny Willett will host, Kearney couldn’t quite pinpoint any, but he could see the funny side of the one that would’ve haunted him ‘til this day!

“I played the EuroPro tournament there and if my memory serves me, I think I needed to make par on the last to win the tournament and I made double-bogey so that’s the memory I have,” he said, laughing.

And so he should be laughing. Kearney banks €51,014 and valuable ranking points for his latest efforts and given his rich vein of form, there’s just no telling where his current golf could lead to. His round was the second lowest European Tour round by an Irish-born player, just a shot shy of Darren Clarke who holds the record in shooting a 60 at both the 1992 Monte Carlo Open and 1999 European Open at the K Club.

His 61, however, does see Kearney now join Rory McIlroy, Padraig Harrington and Graeme McDowell, who have shot 61s on the Tour.

Meanwhile, Paul Dunne signed off with a one-over par 72 for a ten-over tally and a share of 45th. At the top, Garrick Higgo continued to write his own chapter in the European Tour history books as he powered to a second win in three weeks. Just 14 days after he lifted the trophy at the Gran Canaria Lopesan Open with a European Tour record low score of 255, a closing 64 with a hole-in-one moved him to 27-under and handed him a six shot victory at Golf Costa Adeje.

“It feels amazing, I am happy to be done now,” said Higgo. “I am very tired but really happy and thankful. I did (feel pressure) from the start. It is not easy to lead, the other day was my first time, and in this game anything can happen.

“It’s unreal. I can’t believe it has happened so quickly again, but my game has been good so I can believe it as well. It feels good. I have been working really hard on a lot of little things and I have also accepted what works for me and kind of stuck with that. I think that has been a big thing. If I don’t play as well, I don’t look for something, so I am going to try and keep going.”

Higgo moves up to fifth on the Race to Dubai Rankings in Partnership with Rolex and also moves to the brink of entering the top 50 in the Official World Golf Ranking for the first time.