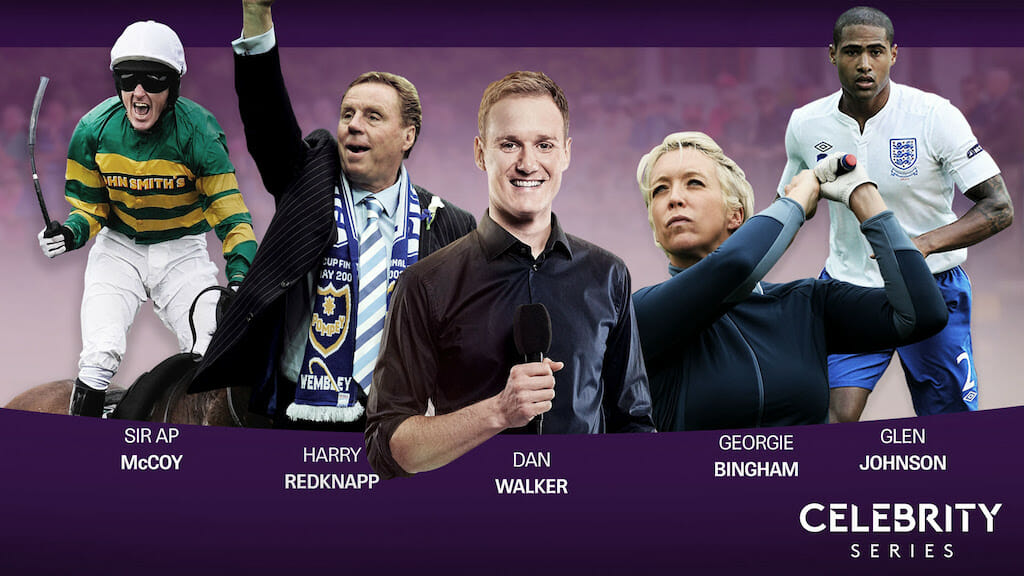 The Legends Tour has launched the innovative Celebrity Series and confirmed its first five Celebrity Ambassadors, who will be joined by other stars of sport and screen to compete for a spot in the Grand Final, which will take place in the Indian Ocean at the end of the year.

There will be four Celebrity Series qualifying events in 2021, taking place in the days prior to tournaments on the Legends Tour International Schedule, culminating in the Celebrity Series Grand Final in the Indian Ocean.

Harry Redknapp, Georgie Bingham, Glen Johnson, Sir AP McCoy and Dan Walker, all highly-respected figures in their chosen fields, have signed up to be Celebrity Ambassadors and will be the face of the Celebrity Series.

The Celebrity Series events will take place prior to the Staysure PGA Seniors Championship at Formby Golf Club, the Irish Legends presented by the McGinley Foundation at Rosapenna Golf Club, the Senior Scottish Open hosted by Paul Lawrie at Royal Aberdeen, and at an additional European venue to be announced.

The Series finale will take place in the Indian Ocean at the end of the year, where the five ambassadors will be joined by the five highest-ranked celebrities on the Order of Merit.

He said: “I think the new Legends Tour events will be brilliant, not only for the pros playing but for people like myself who want to try and do something competitive on an Order of Merit.

“I think it’ll help the game of golf but I also think it will help those who rarely have the opportunity to be involved in sport. I think it will be great for former sportspeople like myself to keep competitive.”

Harry Redknapp, FA Cup winning manager, ex-footballer and TV personality, said: “I had a great day playing at Wentworth at the launch of the Legends Tour and I really am delighted to be signed up as a Celebrity Ambassador.

“I played in lots of Pro-Ams now and it’s nerve-wracking. When you stand on that first tee and you get an audience there and you’re playing with a professional golfer, you’re out of your comfort zone. When you hit a good shot or you sink a good putt, it’s so satisfying. The buzz you get is amazing.”

Dan Walker, journalist and TV presenter, said: “I love golf and when the opportunity to compete in the Legends Tour Celebrity Series arose, I knew I had to go for it.

“I have been fortunate enough to play alongside some of the world’s best players in Pro-Ams over the years but this is something really special.

“I grew up watching the likes of Woosie win the Masters and so many Legends Tour players competing in Ryder Cups and I am delighted to now have the chance to spend some time with them in the Legends Tour Celebrity Series.”

Georgie Bingham, the TV and radio presenter best-known for hosting shows on talkSPORT, ESPN and Sky, said: “I am over the moon to have been asked to be a Celebrity Ambassador for the Legends Tour and I can’t wait to get out on the course.

“I have been lucky enough to play in many Pro-Ams and I can honestly say they are so much fun. Being able to play golf with Legends of the game is so appealing and I am sure the Celebrity Series will be a great success.”

Glen Johnson, ex-Liverpool and England international footballer, Premier League winner with Chelsea and FA Cup winner with Portsmouth, will play in three of the four Celebrity Series events, said: “After retiring from professional football, golf became my sporting passion and being involved with the Legends Tour is a dream come true.

“It is a great initiative by the Legends Tour to launch this series and I am sure it will be hugely popular and will attract more people to the sport.

“It will be amazing to tee it up with my fellow Celebrity Ambassadors and the pros on the Legends Tour, many of whom I have watched on TV over the years winning Majors and Ryder Cups.”

“Bringing together the Legends of golf with some of the biggest celebrity names is a winning combination and I’m excited to see these guys tee it up throughout the year. I have admired all five ambassadors for a number of years as they have excelled in their respective fields and it is wonderful to welcome them to the Legends Tour.”