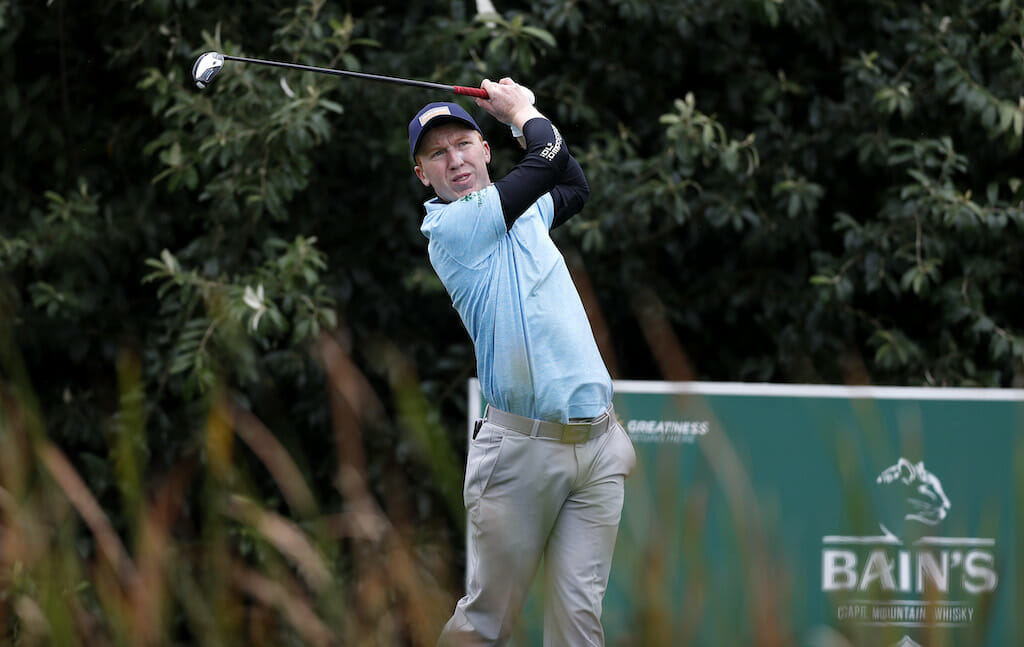 Gavin Moynihan carded a one-under par 71 to move into the top-50 ahead of the final round of the Bain’s Whisky Cape Town Open.

The Dubliner, who finally shook the monkey off his back after guaranteeing safe passage to the weekend rounds after 18 missed cuts on the spin dating back to last July, carded three third round birdies and two bogeys in an effort that moves him back into the red for the week at one-under par and into a tie for 49th.

Santiago Tarrio and Neil Schietekat both posted five-under par rounds of 67 to share the lead with Jacques Blaauw on 11-under par at the end of day three. Blaauw entered the third round with a share of the lead and, despite a double bogey on the par three 15th hole, will enter the final day tied at the top of the leaderboard thanks to a three under par round of 69 at Royal Cape Golf Club.

The leading trio have a two-stroke cushion to Spain’s Emilio Cuartero Blanco, Sweden’s Mikael Lindberg and New Zealander Daniel Hillier, who all share fourth place on nine-under par. Spain’s Tarrio, who finished seventh on the Road to Mallorca Rankings in 2020, will go in search of his maiden Challenge Tour title on Sunday after plotting his way around the intricate Royal Cape layout on day three.

“I didn’t play really well but I made important up and downs and made some long putts,” he said. “I played much better on the back nine and I scored well today.

“It is a very nice course. It is an old-style course. The fairways are quite narrow and you need to put the ball in the right position to access the tough pins. This course suits my game but I played with a new driver and missed more fairways than I would’ve liked.

“We played near Johannesburg last week and it is so different to here. You see the animals on the course in Modimolle but it is so nice here. The beach is so nice, Cape Town is a cool city and I like it.”

South Africa’s Schietekat finished in a tie for ninth place at last week’s Limpopo Championship, the first of three co-sanctioned events by the Challenge Tour and the Sunshine Tour, and he was pleased with the way he scrambled his way to the top of the leaderboard in Cape Town.

“I played nicely yesterday, I actually feel like I played better yesterday than today,” he said. “There was a lot of scrambling today, but sometimes you have to do that on tougher days when you’re not striking the ball as good.

“When we teed it up, the weather was pretty good and you know that Saturday is Moving Day and you need to shoot somewhere around the 68-67 mark to move anywhere and I shot 67. I hit some good shots, hit some bad shots and made some good up and downs.

Blaauw’s name has been at the top of the leaderboard since he took an early lead on day one in the Mother City and he is relishing tomorrow’s final group battle.

“The form I came in with, I didn’t expect much but, like I said earlier in the week, I’ve got some good memories coming back to the Cape and I’m looking forward to tomorrow,” he said. “It’s going to be quite a cool deal.

“We stuck to our game plan throughout. We wanted to be 14 under after today but it is what it is, hopefully we get there tomorrow. It’s going to be a good battle.”

Scotland’s Ewen Ferguson and Belgian Christopher Mivis took full advantage of Moving Day as they both carded five under par rounds of 67 to leap into a tie for seventh place on eight under par, just three shots off the lead. They are joined on eight under by overnight co-leader Jeong weon Ko, Sweden’s Robin Petersson and South African duo Jaco Prinsloo and JC Ritchie.

The low round of the day went to Switzerland’s Benjamin Rusch, who took just 29 shots coming in to post a seven under par round of 65 to sit tied 13th, four shots off the lead.