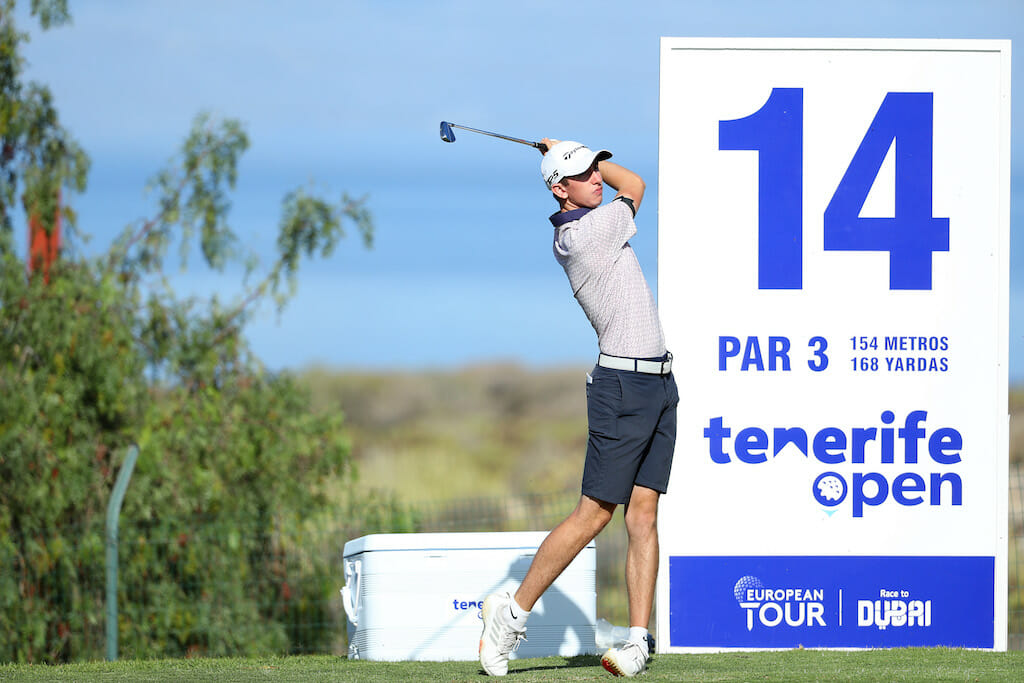 Rookie pro Tom McKibbin has his work cut-out to be assured of a maiden pay cheque at the Tenerife Open.

Catlin, winner of the recent Austrian Open, was lying at 10-under par with five holes to play, needing three birdies for a first-ever Tour 58 or two birdies to match England’s Ollie Fisher’s historic 59 of September, 2018. However, the birdies dried-up with Catlin bogeying his closing two holes.

McKibbin teed-up just after 1.15pm local time and with no spectators allowed on the course, there was just a sprinkling gathered around the 10th tee that included his proud father, Robin. He posted his first pro-career birdie at the par-3 14th hole, the fifth of his round, ahead of birdies at the back-to-back par-5s at the 18th and first holes.

It started to rain slightly while the wind picked-up over McKibbin’s inward half that saw the teenager post a double-bogey ‘7 at the par-5 third hole ahead of a 14th hole birdie, a bogey at his 15th and three closing pars as the sun again shone through at his last.

“It was a bit of a battle out there and I didn’t hit the ball at my best but I ground it out and managed to finish under par which was a nice way to end the day,” he said.

“The conditions were nice over our front nine but we then had a bit of rain around our 12th hole and it also got windier and also colder, so it was a lot tougher. The good aspect about my game today was my short game as that was on fire and while I didn’t hit it at my best, the wedges and putter saved me.”

Fellow Ulsterman Jonathan Caldwell leads the five Irish in posting a five-under par 66 to be just inside the top-20 having moved to seven-under with three straight birdies from his 14th only to bogey his closing two.

“I drove the ball really well, hit a lot of greens, gave myself a lot of chances and managed to make some putts,” said Caldwell. “Just a bit disappointing though to bogey the last two holes.

“I am just finding my game a little bit after a bit of a struggle early on this season. I just feel I am getting more comfortable with my ball striking at the minute so if I continue to drive it straight, I don’t think there’s many courses that I can’t score well on.”

Royal Dublin’s Niall Kearney birdied his last in a two-under par 69 while Paul Dunne signed for a one-over par 72 and Ardglass Cormac Sharvin a 73.

It was back-to-back records for five-time European Tour winner Olesen, who shot a nine under par second round of 61 on the way to a tied fifth place at last week’s Gran Canaria Lopesan Open with the Dane crediting his putter for his opening 62.

“I think the first nine holes was the best putting display I’ve shown for a very long time – I just had to look at it and it went in,” he said. “That was a great start to a round then I played solid on the back nine and was really happy to finish with a birdie on the last after that bogey on eight. It was definitely the putting that was the main thing.

“I was very happy to finish top five (last week), that was amazing. I haven’t been that high on a leaderboard for a very long time; being in contention again was a great feeling and something I’ve missed very much for the last few years.

“I don’t set high expectations now. I found something last week and was making birdies. Today my putting was great and no wind to start made it a bit easier.”