Jonathan Yates finished strong as the Naas man carded birdies on his last two holes to bag a top ten finish at the Abruzzo Alps Open. The final round 67 left Yates on -9 but the finish was in stark contrast to the previous day as Yates dropped three shots on the same holes on his way to a 72 that moved him out of contention.

David Carey also finished birdie-birdie to card a final round 67 and move up to a tie for 13th on an eight-under-par total. At the top, Jacopo Vecchi Fossa raised his second trophy of the month after winning just two weeks after his win at the National Open Golf Championship on the very same course. The Italian who started as joint-leader today, said just yesterday that he was “turbo-charged”. Today he was in over-drive as he finished with -15 (198) here at the Miglianico Golf & Country Club which seems to be a lucky course for him:

“It’s a really good course for my game and I also really like the place where we are, it’s incredible. I played very well, I putted very well also, in fact all aspects of my game worked. Today was a little bit harder because of the wind and I made a mistake on the 3rd with a double bogey, but I hit my best shots on the difficult holes from 10 to 13 which I played very solidly so I’m happy”. 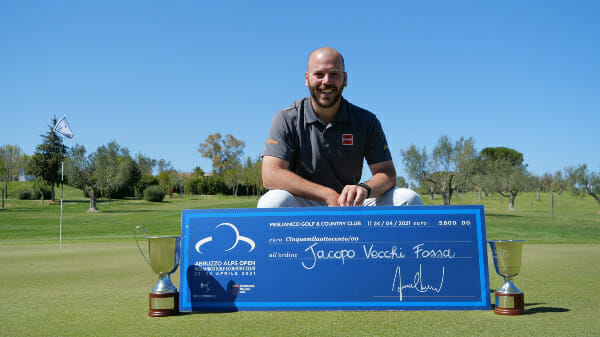 With a double-bogey, bogey, and six birdies for a card today of 68 (-3), Vecchi Fossa’s win puts him at the top of the Alps Tour Order of Merit after three tournaments. We had been expecting a closely fought final day and we certainly had one. The notoriously difficult back nine proved to be decisive.

David Ravetto in joint second place on -12 (201) had a flawless round and was the only one of the top six players to avoid the back-nine traps to have a bogey-free card. The French player who won the 2020 Alps Tour Qualifying School started for home at just one stroke behind the leader at this point on -10. He added two more birdies on the back nine to his four on the front nine to really make his mark in what looks like a promising rookie season.

He is joined by his compatriot Pierre Pineau who started the round at -8. The Le Vaudreuil based golfer turned for home at -10 after three birdies and a bogey. The uphill 11th par 4 saw another bogey followed by a birdie on the tricky 12th, then two more birdies to place him as joint runner-up.

A trio of players share the fourth position at -11 (202), including yesterday’s joint leader, Edoardo Giletta. He took the lead on the 3rd when Vecchi Fossa double-bogeyed and was sitting pretty at the 7th on -15 after two more birdies when two disastrous double bogeys on the 8th and 9th saw him drop back to -11. His resilience showed on the back nine though when, despite two bogeys, he finished the round with birdies on the 17th and 18th.

Two amateurs are the other fourth-placed players. Tom Vaillant started the day in second place on -11. The French player had a fantastic front nine with two birdies and straight pars to be on -13, just one stroke behind the leader, his playing partner Vecchi Fossa. Despite a birdie on the 12th, three bogeys saw him finish at par for the day.

The Spanish amateur Joel Moscatel had a real ‘montada’ on the front nine. Teeing off at -6 he holed six birdies to rise to -12 heading for home. The infamous back nine took their toll where two more birdies could not compensate for the three bogeys to see him finish the day at 66 (-5).

The Alps Tour players now head to Umbria in central Italy for the Antognolla Open from Wednesday April 28th to Friday April 30th.