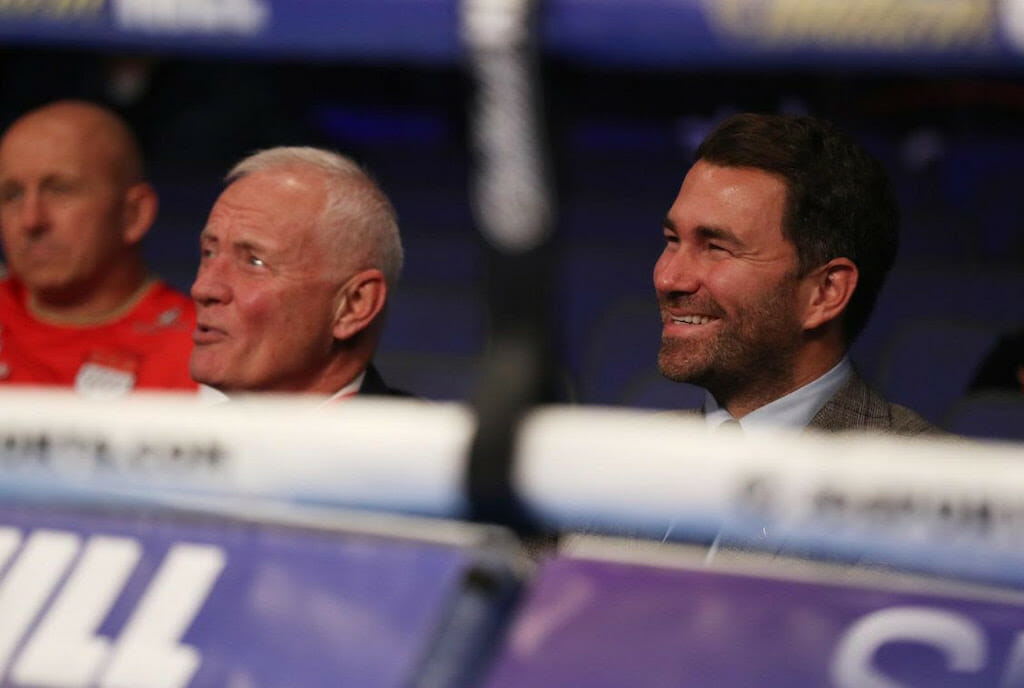 Eddie Hearn will become Chairman of the Matchroom Sport Group of Companies as Barry Hearn steps aside after almost 40 years to become President of the Group in an advisory role, dealing primarily with event strategy and global development.

Matthew Porter will become Chairman of Matchroom Multi Sport and Katie Hearn CEO of Matchroom Media. Hearn founded the sports promotions company back in 1982, enjoying huge success with Snooker before moving into Boxing, Darts, Pool and Tenpin Bowling amongst more than a dozen different sports. Through the 1990s Hearn turned several niche sports into major TV attractions with a succession of innovative ideas.

His acquisition of a majority shareholding in the PDC in 2001 and World Snooker in 2010 saw him appointed Chairman as both companies went from strength to strength. Matchroom supplies a wide range of sports programming to broadcasters worldwide, producing over 3,000 hours of action annually across over 600 event days in addition to original documentaries and shoulder programming for all platforms.

Following several years in the sponsorship and event management industry, Eddie Hearn joined Matchroom Sport in 2004, he assumed the role of Chief Executive of the PGA EuroPro Tour and subsequently headed up Matchroom Sport’s rapidly expanding poker and online gaming operations. With the swift growth of the company in recent years Eddie has assumed the role of Group Managing Director and will now become Group Chairman.

Eddie’s most notable public face is as the head of Matchroom’s Boxing division, promoting a stable he has grown, and which is littered with World Champions and Olympic gold medallists. Under Eddie’s leadership, Matchroom Boxing has returned to the forefront of the sport around the world. In 2018 he agreed a historic $1billion deal with live streaming platform DAZN to stage 16 fights a year across America under Matchroom Boxing USA.

Barry Hearn OBE said: “It has been a huge honour to have worked with some of the greatest sports people on the planet across the last 40 years and enjoyed so many wonderful experiences across our spectrum of events in that time, from snooker’s glory days of the 1980s to record-breaking boxing shows and the incredible growth of professional darts, as we have created opportunities for thousands of sportsmen and women during that time.

“Great challenges have been met, but none more so than the Covid pandemic. I have been determined to stay in charge until this disaster passed and now there is light at the end of the tunnel and I believe it is the right time to pass control of Matchroom to my son Eddie and the brilliant teams we have assembled across all our activities.

“I shall continue to be available to all Matchroom companies as non-executive President, an advisory role concentrating on group strategy and global expansion, but Eddie will be elevated to Group Chairman with overall responsibility for the entire group.

“I could not be prouder of the Matchroom Group of Companies and the outstanding teams that operate in a highly competitive marketplace. Matchroom has grown from two employees operating in an office under a snooker hall in Romford in 1982, to the global powerhouse it is today due to the efforts and performances of all our staff, contractors, broadcasters, and partners.

“I know the company is in good hands with Eddie at the helm and with my daughter Katie heading up Matchroom Media, Matt Porter at the PDC, Frank Smith at Matchroom Boxing, Emily Frazer at Matchroom Multi Sport, Steve Dawson my Chief Executive for over 30 years and Dan Godding at the PGA EuroPro Tour, along with all their teams.

“Now is the time to give all Matchroom employees the opportunity to take this great British company to the next level and beyond.”

Eddie Hearn commented: “Anyone that knows me is well aware of what Matchroom means to me and our family. It has a legacy that spans 40 years from a small office under a snooker hall in Romford to a global powerhouse of sports entertainment. My father has dedicated his life to the company and since I joined in 2004 I have done the same.

“Now a greater responsibility falls on my shoulders and I am very proud to continue his great work and lead the business and the incredible team that we have built at Matchroom. We have seen astounding growth in the last ten years but we have only just begun. I look forward to continuously evolving and continuing the global growth of this astonishing family business.”