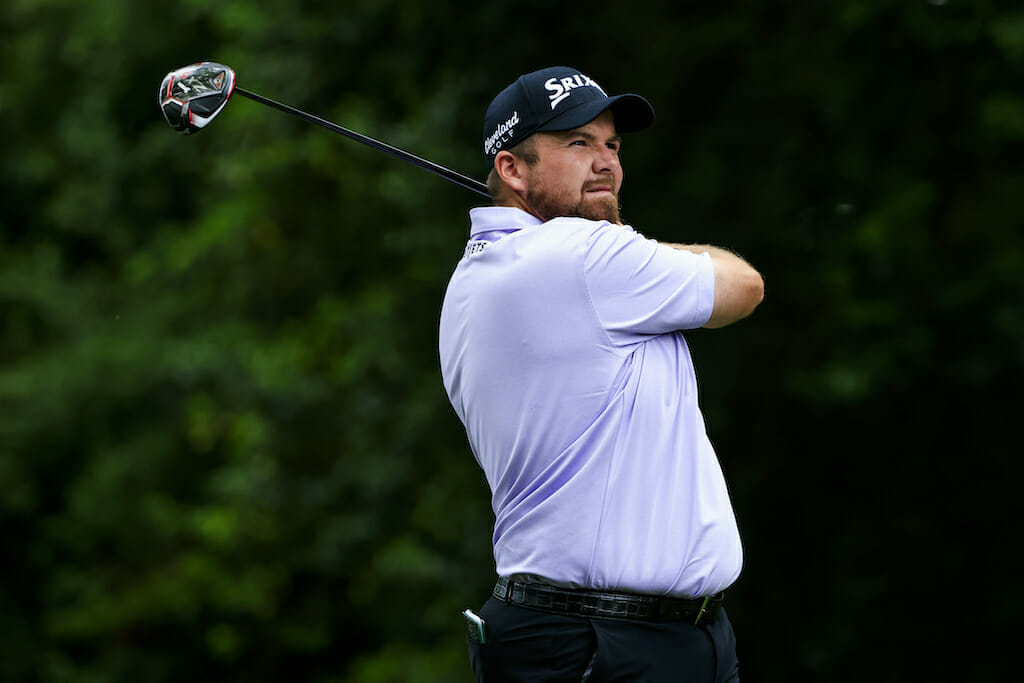 Shane Lowry plays a stroke from the No. 2 tee during Round 3 of the Masters at Augusta National Golf Club, Saturday, April 10, 2021.

Shane Lowry admits it’s felt close to clicking all week at the Masters despite the Open champion now lingering a full 11 shots behind Hideki Matsuyama’s lead ahead of the final round of the 85th Masters.

The 34-year old was full of hope entering golf’s traditional moving day but was unable to enjoy any momentum, trading three birdies with three bogeys to remain at even par for the tournament.

Having moved to one-under par, Lowry found the centre of the par-5 15th fairway as the wind gusted through the Georgia pines. At that point just six shots off the lead, he sent his approach flying over the green as the klaxon blew for a play suspension with an apparent threat of lightning in the air. Lowry returned to a softer golf course some two hours later but as the likes of Matsuyama made hay down the stretch, the Clara man came unstuck with the change of pace on the greens, only making ‘5’ on 15 before three-putting 16 and closing with two pars to be sitting in a share of 21st at evens.

“The whole week for me has been like that,” Lowry said when asked if he felt like it was a case of one step forward and one back. “I feel like I’ve been very close, been in contention, but I’m not.

“I’m disappointed; I feel like level par for these last three days is probably the worst score you could be on, but then I’ve got to take the positives from that, as well. If I can go out and shoot a decent number tomorrow, I could have a very decent week for myself, and yeah, just move on.”

Having birdied 12 holes through 54 this week, Lowry was left to lament what might’ve been ahead of Sunday’s final round, but didn’t shirk expressing his disappointing to the media post-round on Saturday.

“I feel like I’ve made an awful lot of stupid errors – just bad decisions a few times this week that have really cost me,” Lowry explained. “My start yesterday, like I played lovely the first day, shot 1-under, very happy with that, and then I go out and I start double bogey-bogey yesterday, and that’s just stupid. It really is.

“Standing there in the middle of the 1st fairway with wedge in my hand and the whole of Augusta to the right and I miss it left, which is the only place you can’t miss it, which it’s kind of inexcusable. Then I bogey the 2nd, and same, middle of the fairway with a wedge on No. 7 yesterday, as well.

“Just got my round back on track, made a couple of nice pars on 4 and 5 and then played 6 well and then hit a great shot down on 7, and you’re only trying to hit it into that bowl left of that flag, and left it short and made bogey again, and that kind of frustrates me.

“It’s hard to be out there playing around Amen Corner, playing all those difficult holes, the wind swirling when you’re on the cut mark or feel like you’re close to the cut mark. I felt like, if I got off to a better start yesterday, I might have been able to kick on a little bit better and make some more birdies coming in, but when you’re coming in and you’re kind of just worried about — not worried about the cut, but you don’t really want to do nothing stupid, you’re kind of playing a little bit safer than you might. Yeah, I’ve made a lot of bad errors, but my game — a lot as in four or five.

“But my game has been very good. I’ve driven the ball okay, and I’m pleased with how I’m putting the ball at the minute. I’m seeing my lines, and I’m pretty happy with that. I’m pretty happy where my game is at, like I really am. I did an interview last week, and I said, I’m very happy where my game is at, and I feel like if I just stay patient over the next few months, that something special might happen.”

Something special is happening for Japan’s Matsuyama after a stunning seven-under par 65 gave him a four-stroke lead ahead of the final round at Augusta. Looking to become the first Japanese player to win the Masters – the 29-year old fired five birdies and an eagle, including playing his final four holes in four-under par to move to 11-under par, four shots clear of Justin Rose, Will Zalatoris, Marc Leishman and Xander Schauffele.

“Thankfully for the rain, I was able to put some spin on the ball and checked up and got close to the pin,” said Matsuyama post-round, adding: “I have a lot of great memories watching the Masters as a young boy. First time I watched, Tiger Woods was the winner. Another great memory is when he chipped in at 16 down the hill, that putt just going in. I was always dreaming some day I could play here.”

“This year’s been a struggle. Haven’t really played my best. The last three years, you know, there’s been different probably reasons why I haven’t been able to win. But this year, starting early in the year, I have a coach with me now from Japan. It’s been a great help, a great benefit.

“Things that I was feeling in my swing, I could talk to him about that, and he was giving me good — he always gives me good feedback. He has a good eye. It’s like having a mirror for my swing, and it’s been a great help for me. We worked hard, and hopefully now it’s all starting to come together. His name is Hidenori Mezawa.”