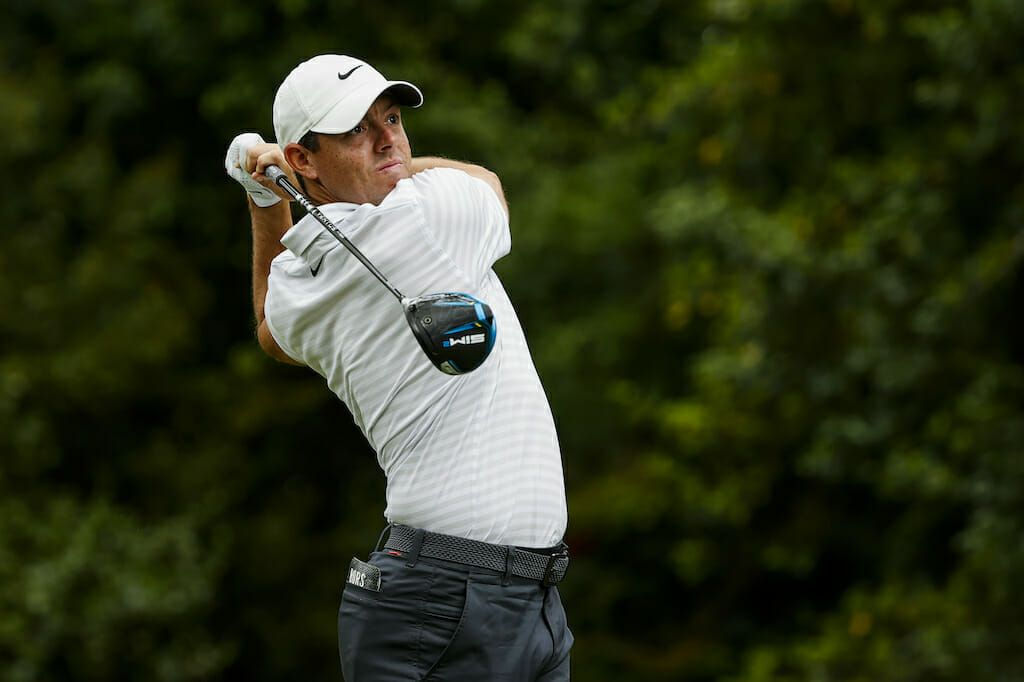 Rory McIlroy plays a stroke from the No. 2 tee during Round 2 of the Masters at Augusta National Golf Club, Friday, April 9, 2021.

Paul McGinley and Butch Harmon believe the best thing Rory McIlroy can do for his golf game is down tools and clear his head following a missed cut at the Masters.

Take seven of McIlroy’s Grand Slam quest ended in despair with rounds of 76 and 74 seeing him miss out on the halfway mark by three strokes at Augusta National. In truth, the world number 12 never looked comfortable with his game. McIlroy finds himself at the beginning of his journey with swing coach Pete Cowen and it was always going to be a big ask to find his best stuff in time for the Masters.

With the PGA Championship returning to a happy hunting ground for McIlroy at Kiawah Island on May 20th, the four-time Major winner has been urged to take a few weeks off in the meantime, not just by former Ryder Cup winning Captain McGinley but also legendary swing-coach Harmon.

“He’s starting to doubt himself,” McGinley said on SkySports commentary. “There’s confusion in his swing and nobody’s ever played well with a whole lot of thoughts their your head. There’s a lot of work to be done here.

“I think the best thing for Rory is a few weeks in the sunshine on a beach somewhere and clear his head. Sometimes the harder you try at this game the harder it gets, no matter how talented you are.”

Harmon echoed his co-commentators sentiments, the American feeling the Masters had come too soon given Rory’s current period of transition under Cowen.

“Rory’s out of sorts,” Harmon agreed. “A couple of weeks off down in the Bahamas with the family, just relax, get away from golf and then come back with a fresh outlook. I said coming into this week it was going to be difficult bringing a new golf swing into a major championship. First of all, bad shots are part of the process, as we’re seeing.

“The difficulty is when you come in with a new swing you don’t have the confidence in it. It might work on the range, or for practice rounds but that doesn’t mean anything until you have to put it in play.

“To have made the change right before coming into a major… was that the right thing to do? I don’t know. He picked the right guy, that’s for sure. He’s had success with everybody he’s ever touched.”

Yet McIlroy wasn’t the only student of new coach Cowen to miss the cut. Brooks Koepka, who claimed he was playing with a broken knee this week, was just one shot better than McIlroy at plus-five – the same score as defending champion Dustin Johnson and Lee Westwood while Sergio Garcia also missed out at four-over par.

As for those who did make it, Bryson DeChambeau fired a five-under par 67 to reignite his tournament chances at one-under, one shot clear of Shane Lowry and Spain’s Jon Rahm. Adam Scott and Phil Mickelson were amongst those to make the cut on the mark at plus-three while two-time Masters Champion Jose Maria Olazabal, playing in his first competitive tournament of the year, carded a one-under 71 to advance at plus-two.

Justin Rose leads by one stroke atop the board at seven-under par with debutant Will Zalatoris and Brian Harman at minus-six while Jordan Spieth (68) and Justin Thomas (67) both made significant moves to get to -5 and -4 respectively.