Rich pickings to the North 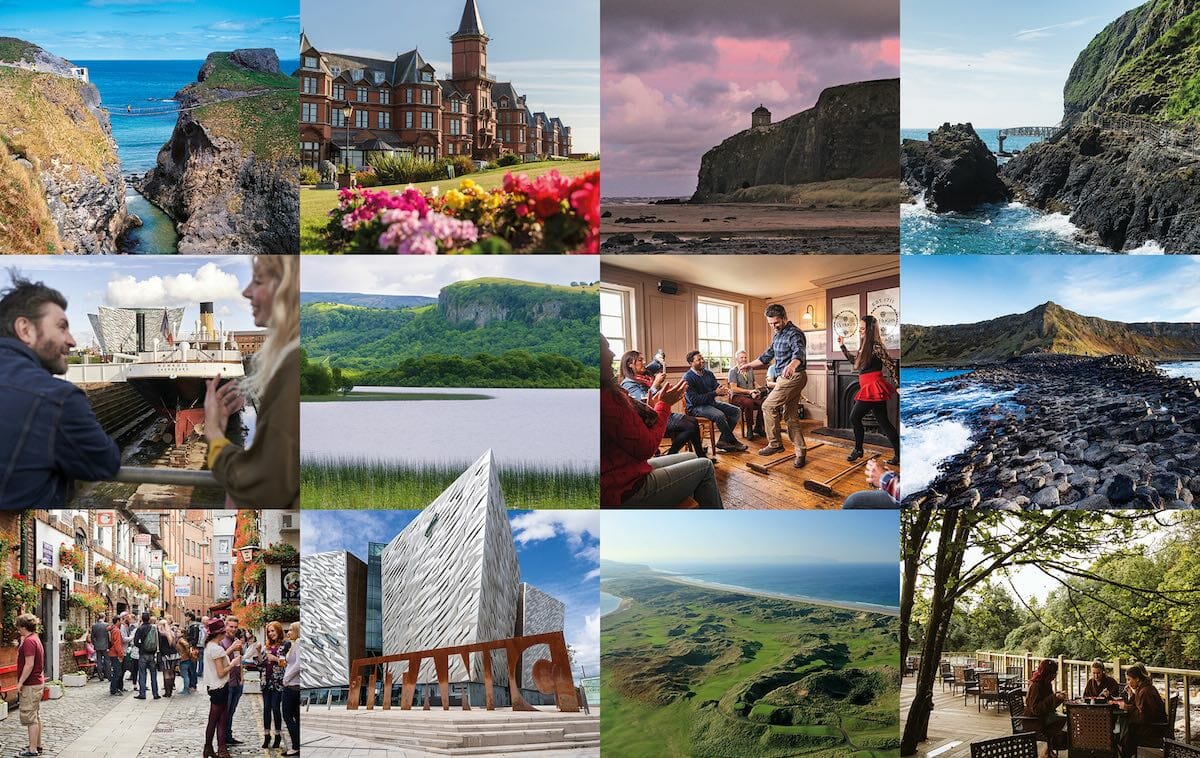 You have to pick your moment. There’s a right time and a right place for everything… and when you get it just right it creates a memory that lasts a lifetime.

Don’t believe me? Well here’s the thing, step onto the 4th tee at Royal County Down, turn to face the Mourne Mountains and see Royal County Down’s splendour racing back towards the clubhouse, next to the sea with the spire of the Slieve Donard hotel raising your gaze to the mountains beyond. The hole you’re about to play matches this beauty so sublimely. That right there is the memory I’m talking about.

There are countless other such memories across Northern Ireland, and that’s just on the golf course. Add in everything else on offer (I spent three hours at the Titanic Exhibition and only took in half of it) and you could make it a golf trip, a family trip… or both.

If you need any more convincing on the special moments you’ll experience on Northern Ireland’s courses, here are a few: standing on the 1st tee at Portstewart is astounding – so astounding it affects your swing; the 1st at Scrabo is as beautiful as it is terrifying, the fairway rising fast and furious through the gorse to Scrabo Tower at the top; the 7th at Lough Erne is that perfect presentation of dramatic hole and lakeland backdrop; one of several holes at Ardglass – the par-3 12th probably – where the sea promises to engulf you; the snakelike charm of the 5th at Kilkeel; the heights and surroundings of the turret-like par-3 2nd at Cairndhu; the 17th at Moyola Park, enshrined in towering trees; the entrance at Gracehill, mere yards from the Dark Hedges; the course and balcony views from Belvoir Park’s clubhouse; the red squirrels, deer and solitude of Newtownstewart; the history of Royal Belfast; and the recent and lengthy glories of Royal Portrush.

Every golf trip requires a moment you can wrap your memories around. The above are some of mine but there are close to 100 courses in Northern Ireland, playgrounds for any and all who wish to experience the new, the revered and the different.

When you start any conversation with the world-class heavyweights of Royals County Down and Portrush, you’ve already stacked the deck in your favour. Back it up with Portrush’s neighbours at Portstewart and Castlerock, not to mention the exhilarating Ardglass, and few destinations can trump that hand. The history, the tournaments, the reputation and the landscapes (course and scenery alike) give Northern Ireland a magical touch… and I haven’t even mentioned the quality of the parklands which comfortably back-up Northern Ireland’s world-class reputation.

There are the old classics such as Royal Belfast, Belvoir Park, Malone, and Clandeboye, the lesser-known beauties of Moyola Park, Spa, Shandon Park, Kilkeel, and Gracehill, and the modern might of Lough Erne. Then you have the young yet timeless Galgorm Castle Golf Club, the idiosyncratic thrills of Scrabo, and the short-course dynamos of Royal County Down’s Annesley Links (par 66) and Clandeboye’s quirky Ava course (par 70).

Much can be made of the Major champions who learnt their craft here and it is fitting that the world acclaimed links match such reputations. Since 2015, the Irish Open has been held here four times and will again. The Northern Ireland Open became a regular stop for the European Challenge Tour at Galgorm Castle (and at Cairndhu Golf Club in 2021). And then there’s the hosting of the Open in 2019, at Royal Portrush, which cemented this country’s reputation as one of golf’s ultimate destinations.

That can easily be illustrated with a few statistics: the economic impact of golf has risen steadily over the past five years, increasing 62 percent to £52 million in 2019. In that same year, 5,500 Irish golfers headed over the Border for an overnight stay of some description. This was up over 50 percent on 2018. Figures for 2020 and 2021 will be heavily skewed by Covid lockdowns and restrictions but as more Irish golfers look to travel and play on the island of Ireland, new paths and destinations will present themselves.

The question is: which path and which destination?

Start with the biggest names and you can’t go wrong. Royal County Down has been at the top of global course rankings for many years and it is as exhilarating and unexpected as the rankings would have you believe. It’s a big, bold and brilliant links with blind shots, electric greens, bearded bunkers, vibrancy and variety – not to mention views – and it possesses such character that you end up leaving here believing the course is a friend for life or your lifelong nemesis. 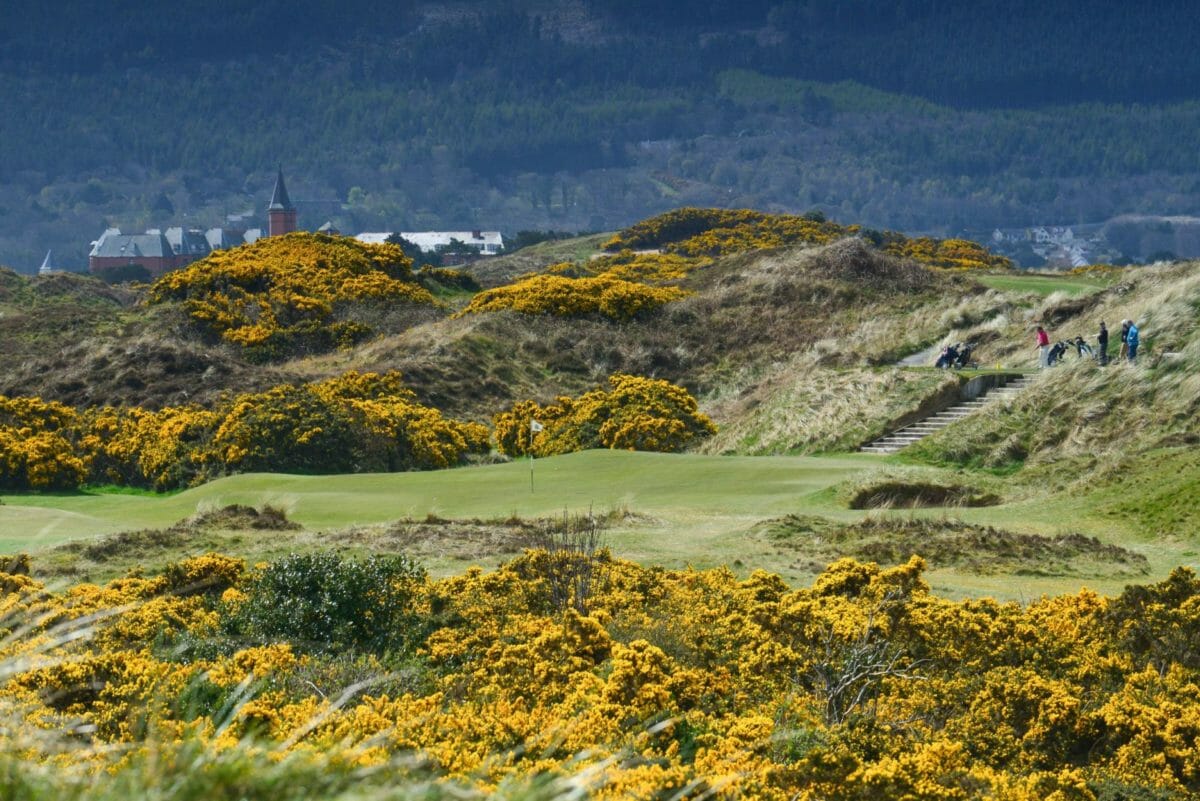 Close-up of the spectacular 4th hole at Royal County Down. By Kevin Markham

Royal County Down was host to the Dubai Duty Free Irish Open in 2015 – but back in 2007, the Walker Cup saw a battle ground for the golfers of the future. Over the two days there were some remarkable match-ups, including a foursomes match that pitched Rory McIlroy and Jonathan Caldwell against Billy Horschel and Rickie Fowler. The Americans were 2&1 winners that day, and Rory’s friendship with Rickie saw the American returning to Newcastle in 2015 for that Irish Open.

The second course, the par 66 Annesley links, proves that beautiful things come in small packages. It’s a peach and a quality links education.

Royal Portrush and Royal County Down tend to be discussed in the same breath… usually around the debate of which is better. ‘Better’ doesn’t work for me, but ‘different’ does. Each has distinct qualities and two of Royal Portrush’s particular strengths are the green sites and the routing. Here’s what golf course architect Ally McIntosh has to say about it.

“This is classic course design of the golden age – that pioneering age around the roaring twenties. Decidedly modern at the time, the best architects had started to build features rather than rely wholly on nature. Harry Colt was a virtuoso practitioner and, at Portrush, he created what remain the best set of greens in Ireland. Colt considered the Dunluce course his masterpiece and it’s easy to see why: the holes sweep elegantly through an undulating dune-scape, never so violent that the golf is compromised yet never so calm that one’s guard can be lowered.” (Royal Portrush was ranked No. 1 in Ireland in the 2021 Irish Golfer Top 100) 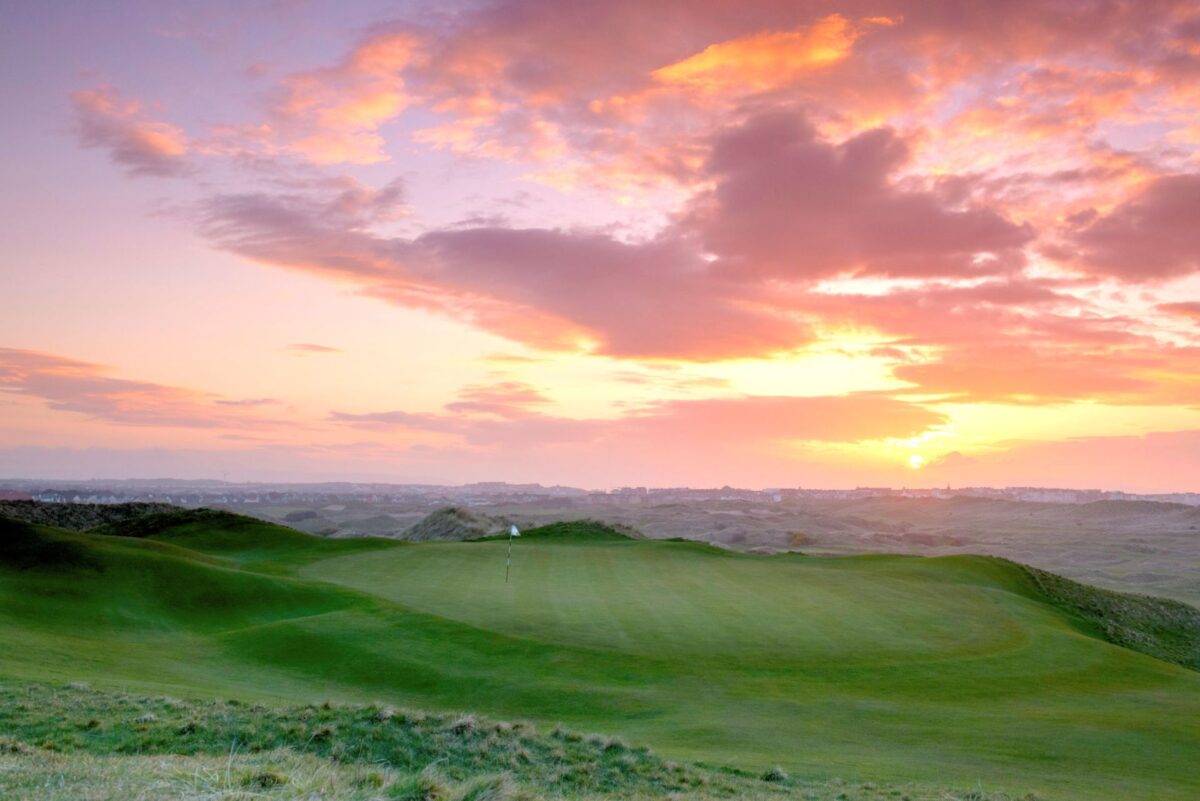 Sunset blankets the 16th at Royal Portrush. By Kevin Markham

It has hosted two Open Championships (1951 and 2019), with a third undoubtedly on the way, but before Lowry’s 2019 victory, Royal Portrush kickstarted the demand for Irish Open tickets when it became the first ever European Tour event to sell out in 2012. The 148th Open Championship also sold out with tickets for the four competition days snapped up almost a year before the tournament. As a point of interest, Shane Lowry won close to €1.72 million; Max Faulkner, the 1951 winner, took home £300.

The Valley course alongside – which gave up two of its best holes for the Mackenzie & Ebert renovations on the Dunluce – is a worthy foil to the Championship links and should not be missed.

Portstewart (Strand) is home to the most stunning opening hole in golf. Few would argue with that as the views over land and sea are endless. The flag on the 1st green below is now visible following intensive buckthorn clearance and boy do you want to crush that drive. The links is renowned for its front nine and when the Dubai Duty Free Irish Open was held here in 2017, competitors produced birdies, eagles and big bogeys in abundance in these deep dunes. Matteo Manassero even made an albatross on the 7th. In all, Portstewart has 54 holes, which makes it a substantial destination on its own. The small seaside town of Portstewart has a great vibe to it, too, and it is at the centre of the three big links golf clubs on this coastline.

The third of those links golf clubs is Castlerock, to the west. Dunes of all shapes and sizes populate the landscape. It’s low and sneaky in places, big and boisterous in others, and the course teases you all day long with its variety and constant surprises. Recent changes by Martin Hawtree have received glowing praise and Castlerock has a number of outstanding holes. My favourites are 1, 8, 10 and the sublime par-5 17th.

The links courses attract the spotlights but there are plenty of other top tier choices to consider, with Belvoir Park, Malone and Royal Belfast close to the city, and resorts (see page 93) such as Galgorm Spa & Golf Resort and Lough Erne promising five star experiences. Or try the seaside wonderland that is Ardglass, and its oldest clubhouse in the world.

Northern Ireland is a big hitter in the golf destination stakes and it is easy to get to from the Republic of Ireland. No flights, no ferries, no fuss. From Dublin’s M50, you can be crossing the Border in under an hour… you could be on the tee at Royal County Down, playing Malone or Belvoir Park, or getting ready to tour the Titanic Exhibition in Belfast, in an hour and forty five.

There are other access points, too, such as Enniskillen if you are coming from the west, and that just opens up a whole different list of possibilities… starting at Lough Erne. Irish golfers south of the Border will have high hopes of exploring Northern Ireland’s fairways this year – and beyond – and with such a wide range of courses and such tourist attractions (see page 88) perhaps it’s time we joined the 125,000 golfers who visit each year.