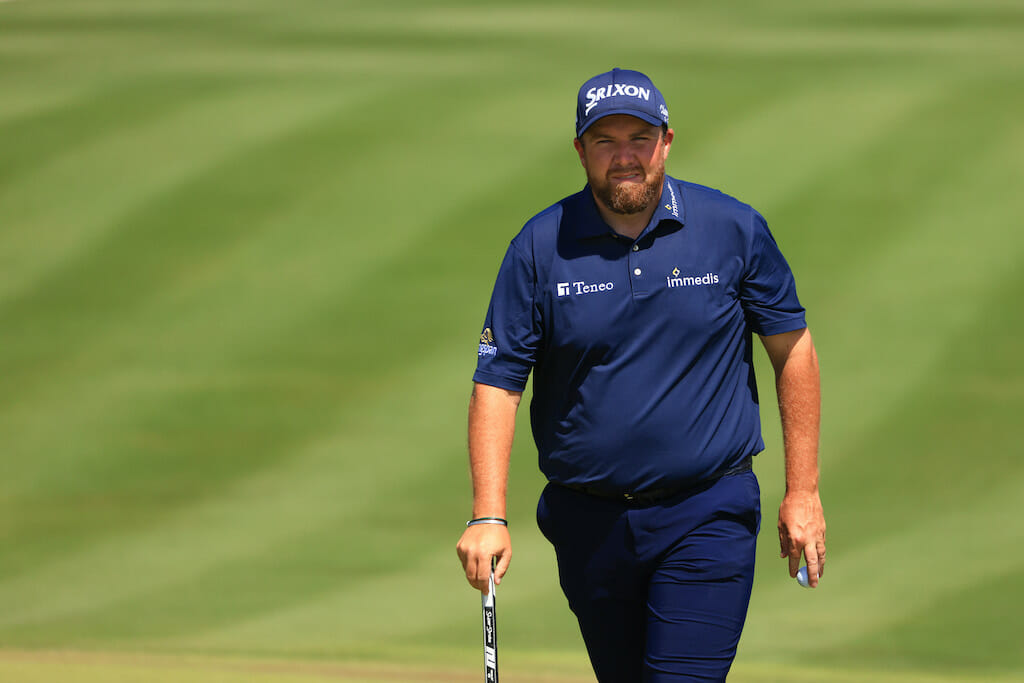 Shane Lowry’s switch to a right-hand-low orthodox putting grip was found wanting in the blustery conditions on day three of the Honda Classic at PGA National in Florida. Lowry had posted eight outward pars in succession before a first birdie at the ninth but very testing and blustery conditions took its toll on the reigning Open Champion.

Lowry dropped five shots with five bogeys at the 11th, 12th, 14th, 16th and 18th holes over his inward half in an eventual four-over par 74 to drop from second place mid-round to be sharing 18th at three-under par and a distant seven shots behind reigning Australian Open champion Matt Jones, who leads by three on 10-under par.

At least three of Lowry’s first putts over his inward nine were well short of the hole and also on three occasions, he putted past the hole with his second putts, and in missing the hole they were down the left side of the cup. And while he comfortably two-putted the 17th for a par, Lowry then three-putted the last from 40-feet for a fifth back nine bogey to fall right out of contention. Lowry had 15 putts heading out but took 20 putts over his homeward nine of 40.

There had been great news for Lowry six holes into this round in no doubt learning via a friend or family member his beloved Ireland had demolished England 32-18 in their Six-Nations encounter. Not even a Bundee Aki red card late in the game could deny Johnny Sexton’s proudly led Irish side handing their rivals a first ‘Triple Crown’ of defeats against Ireland, Scotland and Wales since 1976.

It was a short time later, at the par-4 ninth hole, that Lowry ended a run of eight straight pars in landing his second shot to 16-feet before rolling-in an overdue birdie. Lowry headed to the turn, with warm but windy conditions getting even more testy and buffeting the ball on ‘the dance floor’.

The Clara golfer superbly found a sixth of nine fairways at the par-4 11th only to see his second shot land short after clearing the water but roll down the slope and over the hazard line and into water. Lowry could have done a ‘Henrik Stenson’ and stripped down to his underway and wade into the edge of the water to play a third but he chose instead to take a ‘penalty drop’ on route to a bogey ‘5’.

He was in trouble at the next, the par-4 12th hole, in finding a greenside bunker but then three-putting from 20-feet for a second bogey. Lowry was on the ‘bogey train’ horribly three-putting the 14th from 30-feet with his first putt and then sending his second from four-feet some three-feet past the hole in posting a third bogey in four holes.

He arrived at the opening hole at ‘The Bear Trap’, the par-3 15th, now two-over par for his round and dropping from second place at eight-under par on the leaderboard after nine-holes to now be sharing ninth place at five-under.

His tee shot found the putting surface some 40-feet behind the flag but again left his first putt short and agonising nine-foot shy of the cup. Lowry missed the green left on the 16th, chipped to 12-feet and two-putted for bogey ahead of posting a par at the par-3 17th before heading to the last, the hole he had brilliantly eagled thanks to a 41-foot chip-in a day earlier. However, a day is known as a very long day in golf with Lowry three-putting from 40-foot for a fifth bogey in his closing eight holes.

The conditions didn’t only play havoc with Lowry. Just ask overnight leader Aaron Wise who went out over the first two days to shoot a pair of 64s. Wise went into day three leading by three and had stretched his lead to seven shots after five holes but after he bogeyed the 15th, he found himself one behind Jones, who had led on day one thanks to career-low 61 but fell back into the field with a second round 70.

The 40-year Sydney-born Jones, a double Australian Open winner having won in both 2015 and 2019, birdied the 14th to find himself back into the lead at 10-under par and then parred his closing four in a one-under par 71. He heads to the last day three shots clear of the American duo of JB Holmes (67) and Wise who shot a horror 75 to be tied on seven-under par.

Jones has the one PGA Tour title on his CV and that being the 2014 Shell Houston Open and now looks to join fellow Aussies Stuart Appleby (1997) and Adam Scott (2016) as ‘Down Under’ winners of The Honda Classic. He also led the 2008 Honda Classic field with a round to play.

“There’s still a long way to go,” said Jones.  “A lot of holes out here that can get you, but if I keep managing my game, hopefully I’ll have a chance coming down the last nine.

“However, playing in those Australian Opens where I won two, it was windy, so I’m quite comfortable in the wind. So, yeah, growing up in Australia we’re used to the wind and hopefully we can just keep managing the game. I’ll take whatever I get given. I mean, I don’t know if I would say I want these conditions. It’s a grind out there. It’s a battle out there. So I’ll just — we’ll see what it gives me.

“Another thing and after leading in 2008, I’ve  got a lot more experience, a lot more grey hair (smiling), and I’ve been in this situation before, so hopefully I can just draw from that and look back on that and learn from that and figure it out.”