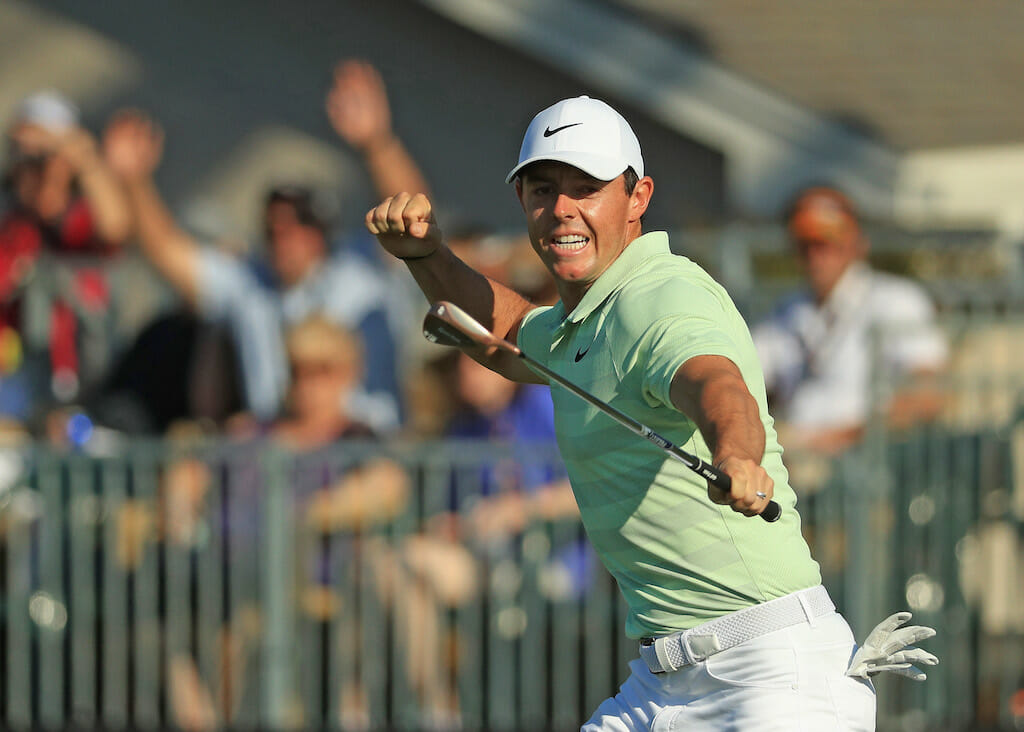 Rory McIlroy reacts on the 15th green during the final round at the Arnold Palmer Invitational Presented By MasterCard at Bay Hill Club and Lodge on March 18, 2018 (Photo by Mike Ehrmann/Getty Images)

McIlroy is a former champion in the next three PGA Tour tournaments – today’s starting Arnold Palmer Invitational, next week’s Players Championship and the week of March 18th to 21st should he tee-up in the Honda Classic close to home at Palm Beach Gardens.

McIlroy captured the 2018 Arnold Palmer some 18-months after ‘Arnie’ passed away on the Sunday prior to the 2016 Ryder Cup. He is the reigning Players Champion given last year’s event was cancelled mid-evening of the first round of 12th March, 2020 due to the Covid-19 pandemic, after McIlroy had birdied his closing three holes at TPC Sawgrass.

And should he decide to add the March 18th starting Honda Classic, there are strong memories of having gone to No.1 in the world for the first time in his career on the back of his 2012 success at PGA National. And while McIlroy has found his way back this week to Bay Hill, it did take some Arnie elbow-bending before that finally happened in 2015.

“I first played this event back in 2015, which I probably should have played it sooner, but I just never was able to get the chance to or have the chance to,” said McIlroy. “When I first played, I said to Mr. Palmer that I’ll try to never miss it again, so I’ve kept my word, up until this point, so I’m back again. And it’s been a wonderful course for me, I played well here in the past, it’s nice to be a past champion and looking forward to another great week here in Orlando.”

McIlroy is one of five consecutive winners of the event teeing-up this week and he’ll play the opening two rounds in an all-European three-ball of past Arnie winners – McIlroy (2018), Francesco Molinari (2019) and Tyrrell Hatton (2020).

“It’s interesting there has been so many international winners as I don’t think this course suits Internationals more than anyone else,” said McIlroy. “I honestly just think that more internationals play in this event than most other PGA Tour events.

“And these things go in cycles and I wouldn’t look too much into it. But, yeah, it is interesting that a lot of internationals have won here the last few years.”

And in coming off a frustrating sixth place in last week’s WGC event on the Florida west coast, McIlroy is quietly confident of straightening the roller-coaster of emotions on a golf course located just a few minutes drive from Florida’s amusement parks.

“I’m feeling a little better about my game,” he said. “I didn’t have a great week at Riviera a couple weeks ago, but then had a bit of a better week last week at the Concession. Still trying to iron out a couple of things that I feel like I can do better.

“But I saw some positive signs last week, and always coming back to a course where you’ve had some good memories always helps too when you sort of feel a little bit better about yourself. So, yeah, you know, I finished decent last week and hopefully can build on that this week.”

And what’s happened to members of ‘Arnie’s Army’ in these different times? Well, a limited number of members of Arnie’s Army – especially Mastercard cardholders – will be allowed into Bay Hill to watch the action. Attendance will be limited to just 25 percent capacity and multi-day tickets will not be sold. Just enough to bring a smile to the ‘King’s’ face.