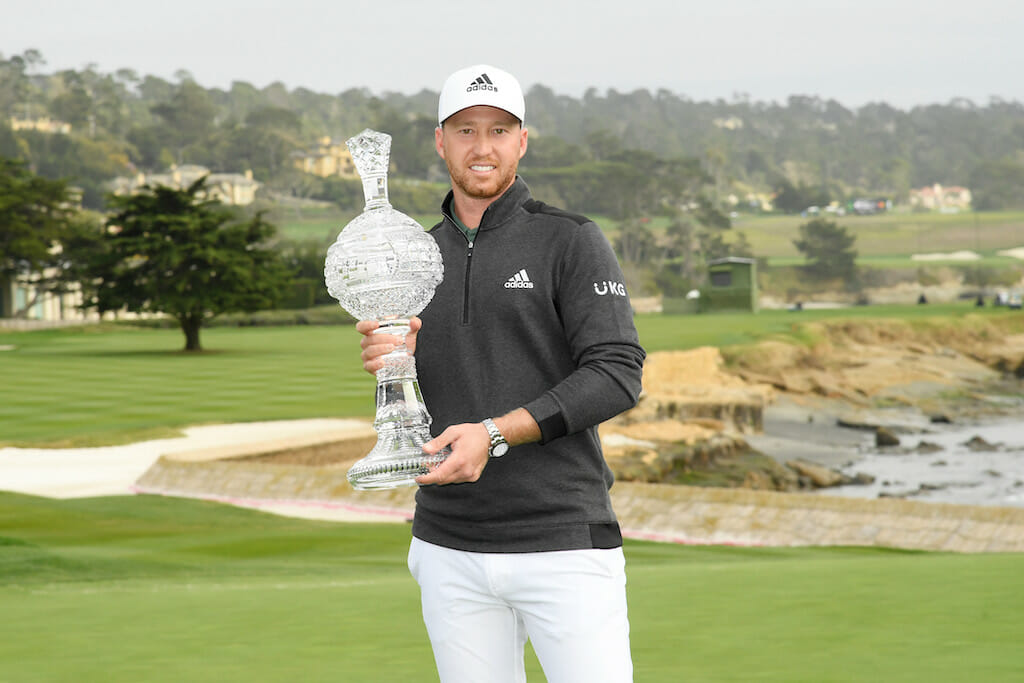 Daniel Berger reversed his fortunes on the 18th hole at Pebble Beach, banishing the memories of a moving day double-bogey to eagle the 72nd and win his fourth PGA Tour title by two strokes in California.

It was Jordan Spieth who entered the final round burdened by expectation – the 27-year old two strokes clear and holding the 54-hole lead for the second week running on the PGA Tour. However, nobody could match the fireworks of Berger on the final day who, laborious pre-putting routine aside, was exemplary in his play, closing out with a seven-under par 65 to take a deserved title. Berger’s confident display was typified by two great shots into the final green where he’d land his second eagle of the round for an 18-under par winning total.

“It’s hard to describe,” said Berger. “I mean, I feel like I got a little bit of revenge on the 18th. I was disappointed obviously with the way I finished yesterday, but that tee shot actually sets up pretty well for me. You start it out the left and hit my cut, I just over did it on Saturday.

“I knew it was going to be a tight finish and I just stepped up there and hit a great drive and hit maybe the best 3-wood I’ve ever hit in my life and the putter was just kind of icing on the cake. I was really looking to 2-putt that. But it was a great feeling when it went in and I’m just, it’s so hard to win out here. It’s, you know, I feel like everything has to come together to win and I was able to do that this week.”

The victory is Berger’s second in less than 12 months and has seen him climb to 13th on the world golf rankings. That will guarantee him a drive down Magnolia Lane for April’s Masters while it’s another stepping stone towards the now 27-year old’s ultimate goal of one day becoming world number one.

“I’m just trying to get better in every aspect of my game and I feel like I’ve accomplished that, and I’ve set some really high goals and I feel like I’m not scared to put in the work,” said Berger. “I’m not the most talented guy out here. I don’t hit it the furthest, but I’ll outwork anybody. So that’s where I think, that is my biggest weapon.

“I do feel like I’m underrated, but that’s okay with me. I just think it puts a little chip on my shoulder which is totally fine. I think a lot of the guys that they give credit to deserve credit. But I’ve been pretty consistent and I’ve accomplished a lot for the short amount of time that I’ve played out here on Tour. You look at some of the other guys and what they have accomplished, I’m kind of right in line with that. So I just want to continue to get better. I feel like, my goal has always been to be the No. 1 player in the world and some people will laugh at that and that’s fine, but that’s something that every day I wake up and I strive for.”

A former world number one, Spieth, continued his ascent back towards the upper part of the rankings though his wait for a first title since 2017 goes on. Now into 62nd on the world charts, Spieth would’ve been hoping to crack the top-50 by converting his latest 54-hole lead into victory in California. He birdied the closing two holes in a two-under par final round 70 as his efforts ultimately fell three shots shy but it’s another big week in the Spieth Renaissance and not one he’ll dwell on with any disappointment.

“If I look back at Friday night of San Diego [missed cut at The Farmers] and you tell me I was going to share the 54 and have the 54-hole lead two weeks in a row and really just fight, finish strong to both weeks, I would have said you’re crazy, to be honest,” Spieth said.

“I was not in a great head space following that missed cut there and just did some really phenomenal work from Sunday through Wednesday of last week that was probably the best period of a few days of work that I’ve put in in a long time. It just got me believing in what I was doing and progressing forward. That’s really what I continue to say is just progressing forward and if I put myself in the position of leading after 54 holes enough times, especially with how I know I’m going to fight even if it’s not going my way, I’ll end up on top one of these days.”

Maverick McNealy came through the field to snatch outright second place at 16-under with a brilliant final round six-under 66. First round leader Patrick Cantlay shared third spot alongside Spieth after a 68 while Paul Casey (-14) enjoyed another good week, sharing fifth spot alongside a fired up Nate Lashley who took his frustration out on the 16th green after a four-putt triple bogey scuppered his winning chances.