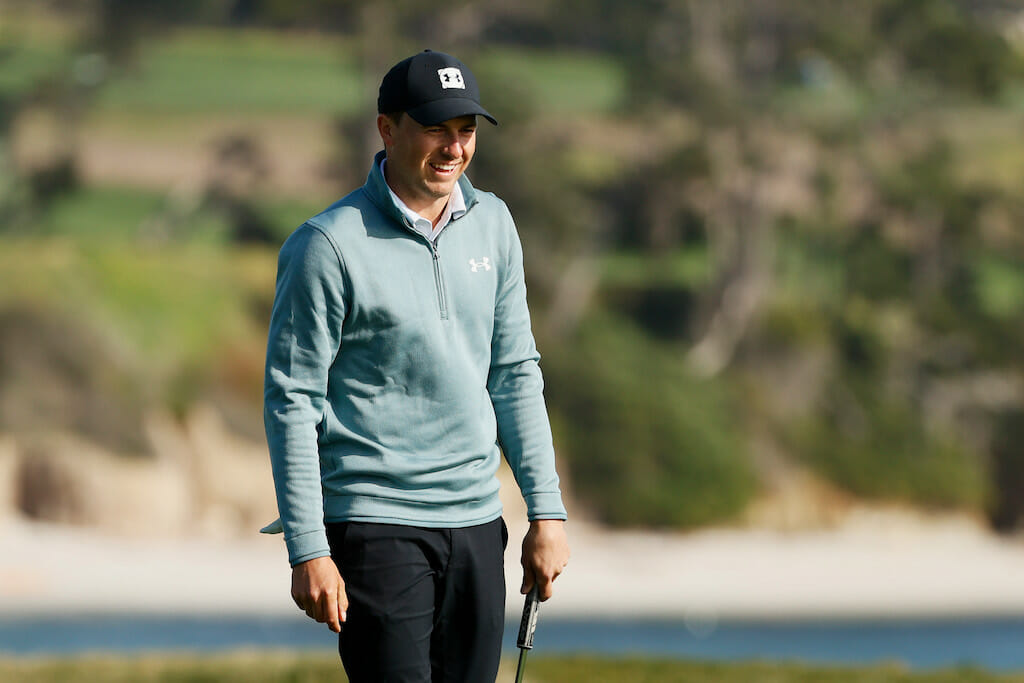 Jordan Spieth will take a two stroke lead into the final round of the AT&T Pebble Beach Championship where he’ll go in search of a first Tour victory since 2017.

Spieth had a 16th hole eagle ‘2’ to thank for turning the round on its head on moving day as he returned a one-under par round of 71 to head the field at 13-under par. Coming off a run of three bogeys in six holes from the tenth, Spieth had 158 yards from the fairway on the 16th but holed out as if he was knocking in a dead-weight putt before his nearest challenger at the time, Daniel Berger drove out of bounds on the last before making double to drop to 11-under par.

“I hit an 8-iron. I had 158 yards adjusted, with the wind in off the right and a little bit of mud on right side of the ball, so I knew I could throw it out to the right and let kind of the wind and the mud do most of the work,” said Spieth. “In the air I thought it was going to be really good, it was one of the only shots I kind of said, Oh, be good, on today. And as it landed it was just exactly where I was trying to hit it, certainly a bonus for it to drop.

“But I mean it’s a good point, it’s a good lesson to learn for tomorrow, that how quickly things can change out here. Make that turn on the 12th tee and you’re just trying to hold on for dear life into the wind and hit a lot of flighted shots from hitting a lot of kind of lofted spinny shots on the first 11 holes. So it’s almost two different golf courses when the wind blows out here with that kind of out and in. But I think it’s a good lesson for tomorrow that there’s going to be some — guys are going to make runs and I just got to stay really patient, recognise that setting a goal for myself and sticking to it is important because things can change quickly out here.”

The 27-year old now finds himself heading into Sunday leading for the second week running after co-leading at the Waste Management Phoenix Open last week before Brooks Koepka came through the field to win in Arizona. And although the three-time Major winner felt nervous before his round on Saturday, and expects to feel the same on Sunday, these are the positions that Spieth has been craving on his way back to the top of the game and he’s understandably excited for the challenge.

“I think my nerves will be there the same as they were last Sunday, the same they were today,” Spieth said. “It’s not going to be the most comfortable feeling to start out, but it never is. I can’t speak to one time that I stood on the first tee on a Sunday with the lead and felt super, super comfortable. You know, you got to kind of get into the round and play into those kind of nerves and that adrenaline.

“I don’t really care about the time frame stuff. For me it’s — and I’m really just going to throw that out of my head because I’m finally consistently doing things over the last two weeks that I’ve wanted to do for a long time. I think, obviously the more you continue to do that, the bounces go your way, like the hole out did today on 16. Someone may do that to me tomorrow or come shoot a 64 or something. I mean, it’s golf and it’s Pebble Beach and you can go low and it can also be really challenging.

“It’s just one of those courses where I’m going to try to set a specific target for a goal going into the round and just get to — and what I’m asking for is a chance to win the golf tournament on 18. So I feel more confident but I’m also sure going to be, I don’t feel like, I don’t feel by any means that I have phenomenal control compared to other time periods where I’ve won three to five times in a season.”

Out to rein Spieth in will not only be Berger at minus-11 but Patrick Cantlay, Russell Knox, Nate Lashley and Tom Hoge who all share second spot just two back while Jason Day and Paul Casey are in the group at 10-under par.