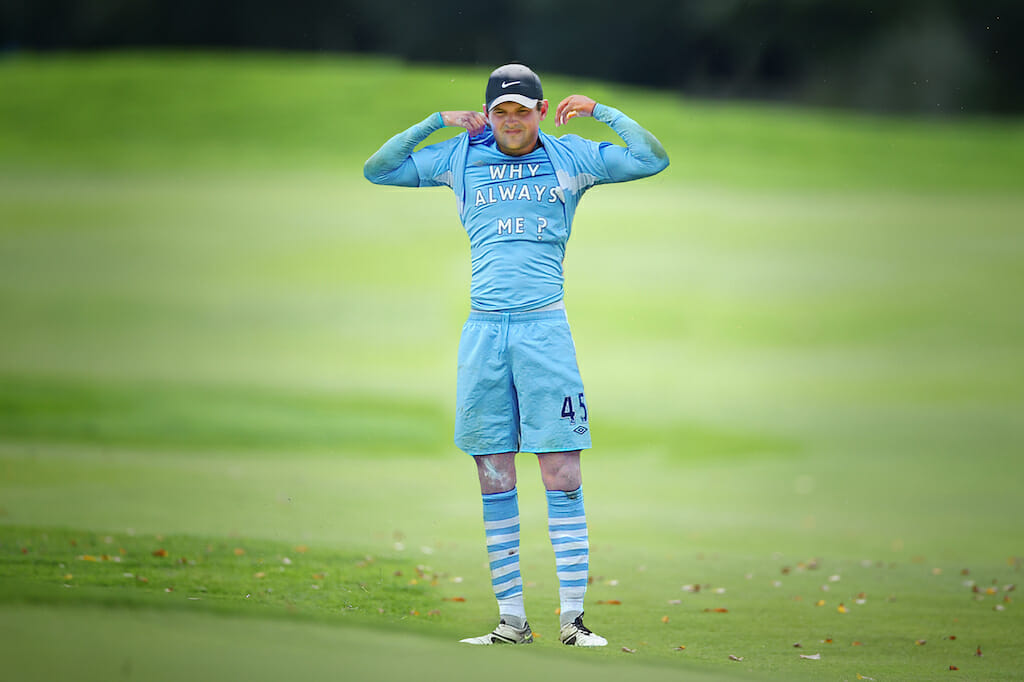 It was the goal celebration that had the whole world talking. Man City’s enigmatic striker, Mario Balotelli revealing a ‘Why Always Me?’ message on a shirt he wore under his jersey after scoring the first goal in a 6-1 demolition of Manchester United at Old Trafford in 2011.

“The truth is that I do not know why I always did,” Balotelli explained. “I made that shirt because at that time it was all about me; people were always talking about me. It was not the same as always me. Left alone.”

‘Why always me?’ was Balotelli’s two fingers to the English media, a response to their obsession with the Italian who courted attention at every turn. Just 21 at the time, Balotelli felt strangled by the press, pestered by paparazzi, and so in his bid to get the tabloids off his back, he plastered the message ‘Why always me?’ to his front in one of the most iconic goal celebrations of the modern era. But why always Mario?

Truth be told, he brought a lot of the attention on himself. A glutton for fast cars, he wrote off a £120,000 Audi import within a week of owning it. He was fined £300,000 for throwing darts at the Man City youth team. He set his own house on fire after letting off fireworks, indoors. And he’s certainly not the man to send to the shops for essentials during Covid restrictions – back in the day his mother sent him out for an iron and he came back with a trampoline, two Vespas and a Scalextric!

Why always Mario? Because for all his talent, trouble was never far behind. It’s much the same story with golf’s great villain, Captain America, A.K.A. Patrick Reed. It’s a shame that after a true golfing masterclass and a five-shot win at The Farmers, we’re left dredging through a canal of Reed’s past indiscretions when the focus should be on his play.

63rd in greens in regulation for the week in San Diego and Reed wins by five; according to stats supremo, Justin Ray, over the past thirty years, only 0.7% of winners have ranked that or worse and won. Reed’s now into the top-10 in the world. Surely a favourite for the US Open that returns to the South Course at Torrey Pines this summer. And yet after so much good, we’re left to lament more Reed controversy. Why always Reed? Because much like Balotelli, trouble has a way of finding him.

Even long before turning pro, Reed was accused of cheating in team qualifying tournaments for the University of Georgia and was dismissed from the team; there was the two-stroke penalty for building sand castles in the bunkers in the Bahamas; there was the allegations from on-course announcer Peter Kostis who told the No Laying Up podcast, “I’ve seen Patrick Reed improve his lie, up close and personal, four times now.”

On Saturday, Reed took relief for an embedded ball that was not embedded, based on a volunteer stating she did not *see* the ball bounce. Reed said himself post-round that it’s “literally impossible” for the ball to plug after bouncing, and yet, after examining the lie with his finger for what seemed like an age, Reed was able to point the rules official to a lip that had magically appeared in the turf.

Eagle eyed viewers were in turn able to point to Reed wiping his fingers in his towel before the referee arrived on the scene. Like a person sneezing an unexpected snot in their palm, he then slipped his hand into his pocket just to be sure it came back squeaky clean. With the rules official left with little to go off, not least because Reed had already removed his ball from the landing site, he was given a club length of relief with no penalty and was able to dramatically improve his lie as a result.

BUT WHAT ABOUT MCILROY? HE DID THE SAME THING! Ah yes, Rory. Reed’s team were quick to point out on Twitter – in all CAPS a la Trump – that our very own four-time major winner had done something similar on 18 in round three. But was it really that similar?

For me, McIlroy’s ball-flight was much higher, and you have to watch very closely to see it – barely – bounce. Reed’s skipped forward yards by comparison and where Reed was evidently unsure that his ball actually embedded – he eventually called over a referee to confirm after all – Rory was fully convinced his had stayed in his own pitch-mark.

“If a ball bounces up and comes to rest in a pitch mark or in a lie that’s not the pitch mark that it made, then of course it’s very hard for it to be embedded,” McIlroy explained, “but I feel the way my ball was definitely in its own pitch mark, it had to be, and that was why I was so confident to take relief and do what I did.”

McIlroy didn’t call over a referee because he’s been playing golf long enough to know an embedded ball when he sees one. If he was unsure, he would’ve marked the ball and left it, and called the referee over to judge for himself. Instead, he dropped, gaining little to no advantage with his new lie, and finished out his round. If Reed was so convinced his ball was embedded, why ask for the referee’s opinion at all? Was he trying to hide something in plain sight?

Whatever your opinion of the two incidents, my opinion is admittedly influenced by the track records of the two players in question. Reed’s reputation has not only been soured by repeated allegations of cheating, but he’s been caught red handed when blatantly improving his lie in that bunker at the Hero World Challenge. McIlroy, on the other hand, has earned his rightful reputation as an honest player. He’s called penalties on himself in the past and has long been a leader in holding up all that is good about the game of golf.

“It’s the worst thing in golf to be labeled as someone that tries to get away with something or labeled a cheater and that’s just not how you want your reputation to be,” McIlroy said.

“Even going back to the PGA Championship at Harding Park last year, I got relief because someone stepped on my ball, but I didn’t feel right because the lie that I had was way worse than the lie that I would have been given. So I gave myself a worse lie to just try to be fair to the field and the tournament in general.

“I’ve never tried to get away with anything out here. I think I said at the time, you know, in golf you’d rather be on the wrong side of the rules than the right side of them because that’s just what our game’s about. Our game is about integrity and it’s about doing the right thing. I always try to do the right thing and hopefully people see that. I feel like I have a reputation of that.”

Why would McIlroy risk that reputation for so little gain last Saturday?