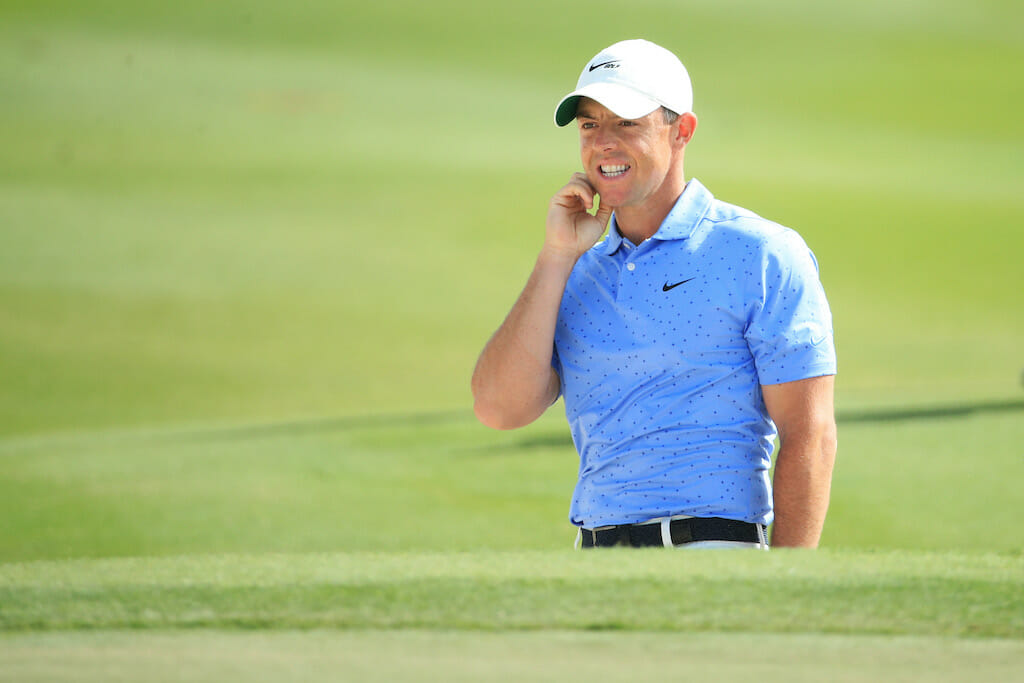 It’s a testament to Rory McIlroy’s talent that after a podium finish in his first event of the season, the golf world is in meltdown trying to figure out where it all went wrong. McIlroy came up five shots shy of a brilliant Tyrrell Hatton performance, out-thought and out-played by the Englishman who moved to fifth in the world off the back of his fourth Rolex Series success.

But for all the plaudits Hatton’s received, they’ve been matched, if not surpassed, by the inquests around McIlroy’s final round 72 – only Tommy Fleetwood (73) managed worse amongst those inside the top-24 on the final day in Abu Dhabi.

When the European Tour released that seven minutes of bliss prior to the tournament, McIlroy on an empty range firing balls into a sunset sky, it was hardly surprising that he went out the next day to shoot 64 and lead. Swinging within himself, he had the ball on a string, a picture of relaxation as he spoke about how neutral everything felt, no fear of a ball going left, no problem hitting every shot in the book.

He said all the right things as he signed off on a moving day 67 to take a one-shot lead into the final round:

“I can’t go into tomorrow thinking it’s my turn. I want to make it my turn. I have to go out there and continue to hit the ball like I hit it on the back nine tonight. If I can do that and give myself plenty of chances, I’ll have a real chance.”

And for all the world it seemed like the McIlroy of Thursday morning and Saturday’s back nine was about to take the tournament by its scruff on Sunday. Two birdies in three holes, his lead extended to two over Hatton. Then McIlroy three-putted the fourth and failed to land another blow.

McIlroy said the wind had affected the putt more than it had previous days but call it a mis-read, a push or a touch of misfortune, whatever the cause, that miss seemed to suck the life from McIlroy. Up against Europe’s in-form player made the task no easier – Hatton doesn’t give an inch when he gets himself in contention these days and as it played out, McIlroy needed a mile. He finished third, banked €407,158 in his first event of the season and could see the many positives post-round:

“I don’t feel as though I played great this week, as I was sort of managing my game but it was nice to get a competitive week under my belt and know where my game is and what I have to do to keep on improving.”

But what else can he say? McIlroy won’t admit it but when Hatton poured the pressure on, he had no answer. Taken in isolation, that’s no problem but it’s become a pattern with McIlroy. He began the final round of last year’s Genesis Invitational tied for the lead with Adam Scott before a 73 saw him lose to the Australian by three. He trailed Hatton by two strokes at the Arnold Palmer Invitational last year before slumping to a 76. When the pressure’s on at the start of tournament, ie. the Majors, McIlroy struggles to produce from the outset. Expectation overcame him at The Open in Portrush where an opening 79 ended his tournament before it began. An opening 75 at November’s Masters where the Grand Slam burden weighs heavy on his head each year brought this reaction:

“I honestly have been playing so good coming in here and then I go into the first round and I shoot 75 and I’m like ‘where the hell did that come from?’”

And that’s the question that needs answering more often than not with the post 25-year old version of McIlroy. We all have our theories, some more convoluted than others, trying to put our finger on why, but for those relying on a McIlroy resurgence due to the sheer depth of his talent, there are no guarantees in golf.

As much as winning becomes habit, losing can quickly become one too and there is a confidence issue with McIlroy, there has to be. I can’t speak for what it’s like to be a top performing athlete, few can, but I can say that people change as they get older, and professional athletes are no different. I’m thirty now, a year younger than McIlroy and the 25-year old version of me was a much braver one, didn’t know the meaning of worry, never knew tell of a hangover. These days I’d weigh up the benefits of having a few drinks of a Saturday knowing that the Sunday blues were going to hit me like a prime Mike Tyson. You start to wonder if the highs are worth the lows.

Anxiety finds us all eventually and in golf, the slightest bit of tension can make all the difference. McIlroy has to find a way to overcome whatever demons are holding him back and to do that, unlike me with the gargle, he needs to keep putting himself in position to win, and to fail. Winning breeds winning and what a shot in the arm it would’ve been for the 31-year old to do it up against Hatton first time out this year.

But whatever the future holds for McIlroy, I’m grateful to be able to watch it and analyse it. He’s a once in a lifetime player, brought up in golf under the GUI banner, a generational talent that I’ll likely never see born on this island again. We lose sight of that sometimes in our criticisms of McIlroy. What Shane Lowry would’ve done to finish third in the UAE instead of missing out on Ryder Cup points and a weekend’s play. I guess it’s a testament to McIlroy that we expect so much from him. Who knows if he places the same expectations on himself. If he does, maybe they’re the things weighing him down?