Palmer joins English at the top in Hawaii after rule scare 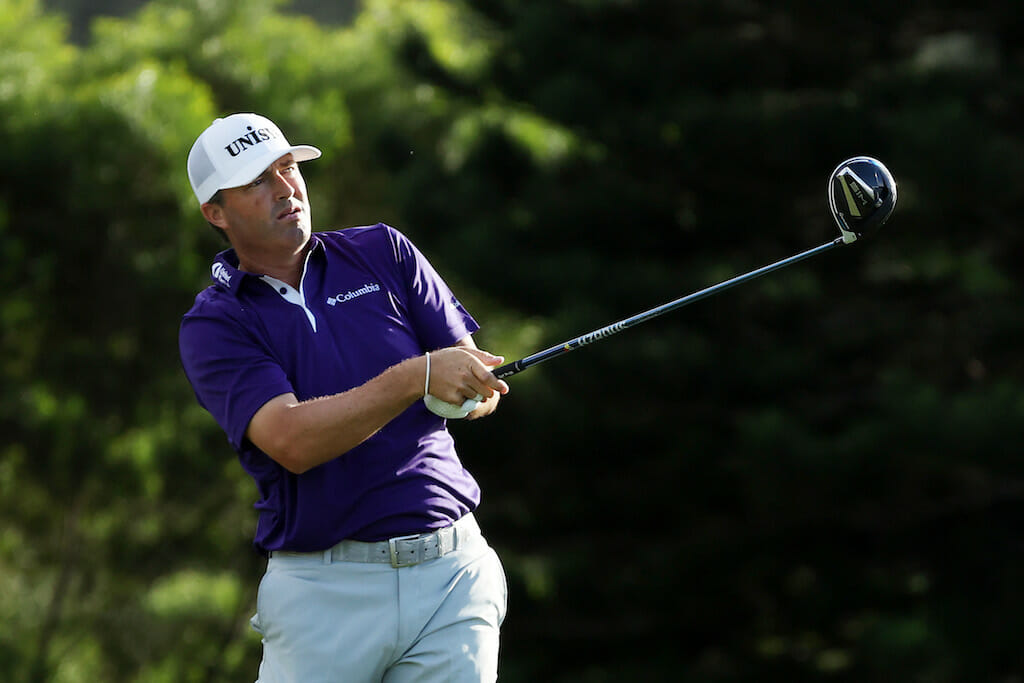 Ryan Palmer has joined Harris English at the top of the Sentry Tournament of Champions after an action packed moving day on the Plantation Course at Kapalua.

Palmer moved to the front at 21-under par after firing a superb nine-under round of 64 that included six birdies in his last seven holes. It wasn’t all plain sailing for the American, however, who came in for scrutiny as he approached the scorer’s hut to sign for his moving day number.

“I saw Mutch [John Mutch – Rules Official] with the book out and I thought, ‘What’s this about?’ I started going through the round in my mind. And then when he said, We have a situation on 9, and I immediately was, like, ‘Let’s see, I hit a good 3-wood, fluffed a chip, told (caddie) James I hit the wrong club, and then went to where I was ended up chipping again, I still had no idea,” Palmer said.

It was what happened after the duffed chip that had been called into question. With his ball ambling back down the hill towards him, Palmer kicked the ground in frustration, moving a loose divot that could’ve been deemed to be improving his lie under Rule 11. The rule restricts a player from deliberately taking actions to affect where any ball in motion might come to rest but Palmer was cleared of any wrong-doing, explaining:

“There was no intention of me trying to abuse the rule. There was no way, because that ball wasn’t even going to be close to where I was at. The rules official showed me the video and I looked at it and I go, what am I looking at? And it took me watching it twice to understand what he was talking about. In disgust, I kicked a divot, but the ball was five feet away from me where it ended up stopping… there was no intention of me trying to help my ball because there was no way my ball was even close to where I was at. I was just discussing with James (caddie) I hit the wrong wedge on the chip shot, in disgust, and then when I got there, I just kind of did the old kick the divot, pissed off motion.”

There was no such drama for English who was bogey-free for the second straight round in making over 126-feet of putts to find the clubhouse in 66. Both players are in the field having made the Tour Championship last year with Palmer last winning alongside Jon Rahm in the 2019 Zurich Classic of New Orleans – his fourth Tour win – while English last collected an individual win at the Mayakoba Golf Classic in the 2013-14 season.

“I’m extremely satisfied,” said English. “Normally Saturday is my toughest day out here on the PGA Tour, kind of a weird day of in between making the cut and finishing on Sunday and I felt like I played really well today, stuck to my strategy, executed really well and stayed patient.

The pair will need to be on their A-game with last year’s PGA Champion, Collin Morikawa stalking just a shot behind at 20-under par after firing a second consecutive 65. The last time he posted back-to-back rounds of 65 or better, he won his maiden major title: “Winning here would mean a lot,” said Morikawa, who has family ties to Hawaii. “Hopefully I can tell you come tomorrow but for now I’ve got 18 more holes and there’s a lot of guys that can make a lot of birdies and I’ve just got to be ready to come hole one.”

Sergio Garcia, Jon Rahm and Viktor Hovland are the best of the Europeans with the trio in a share of tenth at 14-under par.