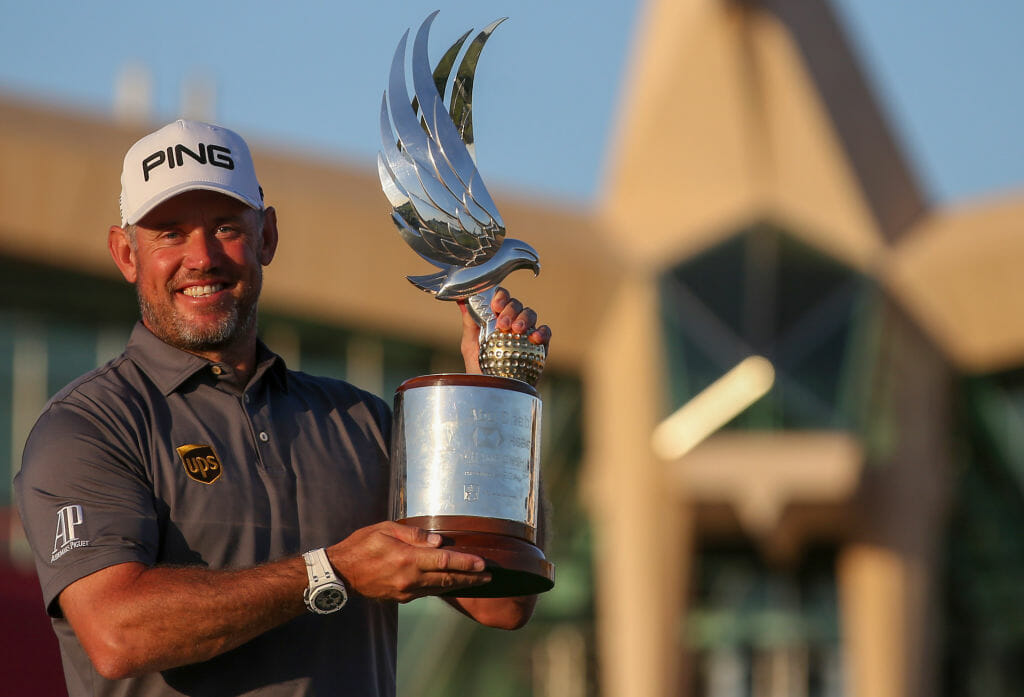 Lee Westwood has wasted little time returning to the UAE, just three weeks after being crowned European Tour No. 1 for a third time in his career.

Westwood jetted out of Scotland on Tuesday bound for Dubai ahead of his January 21st starting defence of the Abu Dhabi HSBC Championship in neighbouring Abu Dhabi. And as Westwood drove from the Close House golf resort near Newcastle to Glasgow Airport to connect with his flight to Dubai, he picked-up another honour. Westwood was contacted by this journalist, as Secretary of the Association, to advise he had been voted as the Association of Golf Writers (AGW) 2020 ‘Golfer of the Year’ for the fourth time in his career.

“I’m again honoured to be voted AGW Golfer of the Year and even more so to now win the award for a fourth time,” said Westwood. “It’s always a special award because it is voted by the dedicated golfing press who are out there reporting on the various tournaments. We all know 2020 was a very different year but they are the ones who continually keep a close eye on what has been going on in the golf world.”

Westwood has travelled to reside with long-time good friend Thomas Bjorn for the next fortnight with the duo to work on their games, playing practice rounds at the Dubai Creek club in Dubai where Bjorn has a residence. Dubai Creek played host in 1999 and 2000 to the Dubai Desert Classic with Westwood showing his fondness for the Karl Litten designed layout being fourth in 1999 and runner-up a year later while he’s also had two second place finishes at the now host Emirates Club.

Westwood said: “I’m out there staying with Thomas (Bjorn) as he’s got a house on the Dubai Creek estate.  It’s a great community where he lives and it’s also one of the older golf courses out there that I’ve always loved playing. It’s going to be an exciting run of tournaments for me as I’ve always played well in the Middle East and I’m defending in Abu Dhabi.

“Teeing-up in Abu Dhabi is going to bring back good memories for me while the memories are still very fresh of winning the European No. 1 title out at Jumeirah Estates just last month. I only hit balls for about 45-minutes since being back in the UK so I really don’t know why I bothered to unpack my clubs. So, I’m looking forward to a couple of weeks practice out in the sun.  I’d had a good rest and raring to get going again.”

Westwood revealed following the ‘Middle East Swing’ he will head to the U.S. to play six of seven weeks from the last week in February to the second week in April and that being the 8th April starting Masters.

He added: “I am not getting any younger though in saying that I’m playing the three events in the Middle East and then after three weeks off I am off to the States to play six out seven weeks. It means six tournaments from the WGC at the end of February and missing one week and that’s the week before Augusta.” Westwood will be making his 20th Masters appearance just a fortnight before he turns 48.