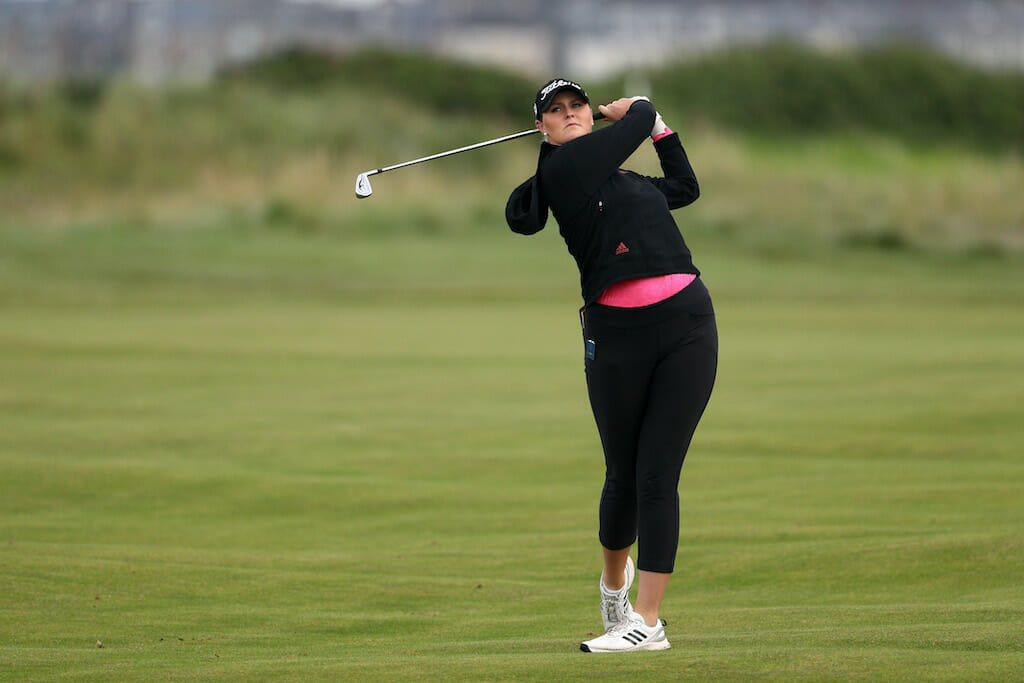 Olivia Mehaffey is relishing a second shot at the Arnold Palmer Cup as she joins Caolan Rafferty and Mark Power for what she describes as one of the “funnest” weeks on the amateur golf calendar.

The Royal County Down and Tandragee amateur made her debut at the 2018 Ryder Cup-style international collegiate event between the United States and Internationals at Evian Resort and although she was on the wrong side of the result that time around, the experience has stood with her.

“It’s so fun, I actually think it’s one of the funnest events we play,” Mehaffey said before arriving at Bay Hill Club in Orlando for the event starting later today and finishing on Wednesday.

“It’s so nice to play with the guys. I played with Viktor Hovland last time, he was my partner. He is so nice, such a sweetie, and literally doesn’t hit a bad shot, but it’s all about Arnold Palmer’s legacy, it’s about having good sportsmanship and you really do feel that when you’re there. Everyone is so respectful. It’s competitive and people want to win but I made so many friendships from that week that are still here today and I’m so looking forward to it. If there was one event to have to sign off the year, this would be it.”

Originally scheduled to compete in the Palmer Cup at Lahinch from July 3-5, the event was postponed due to the public health crisis meaning a December 21-23 spot in the calendar.

“It’s not quite Lahinch but it’s not bad,” Mehaffey laughed, revealing she intends to get home for two weeks at Christmas when play is completed on Wednesday. “I won’t get much longer than that because of quarantine timings and we start our season at the end of January.”

She’ll have a little bit of home with her this week in the company of Rafferty and Power, however. Maynooth ace Rafferty will make his debut at the event and plays alongside Mehaffey in the opening mixed four-ball. He is ranked 24th in the Men’s charts compared to Mehaffey’s 18th in the women’s but has hardly swung a club this year in competition since picking up two top-10s at the GUI’s trip to South Africa back in February.

Kilkenny amateur Power will have a little more golf under his belt having shined over the summer at the Brabazon Trophy (3rd) and The Amateur (semi-final). The 20-year old brilliantly picked up his first individual collegiate title for the Wake Forest men’s golf team in the stroke play competition of the iconic East Lake Cup last year and made his Irish Open debut on invite this past summer too, making the halfway cut at Galgorm Castle.

And what better place to show your talent than Bay Hill, renowned for having been the winter home of Arnold Palmer? The Par 72, 7,381 yard Championship Course sweeps across 270 acres along the shores of the Butler Chain of Lakes. Since 1979, Bay Hill has been home to the Arnold Palmer Invitational, one of the most popular tournaments on the PGA Tour. Arnold Palmer Cup alumni Francesco Molinari (2019) and Matt Every (2014-15) have claimed victory at Mr. Palmer’s tournament.

Since its inception, over 100 former Arnold Palmer Cup alumni have gone on to earn cards on either the PGA Tour, European Tour or LPGA, 29 have represented Europe or the USA in the Ryder Cup or Presidents Cup, and more than 60 have claimed over 240 victories on the PGA or European Tours. The United States leads the series 12-10-1.