Tiger treasures ‘memories of a lifetime’ playing alongside his cub 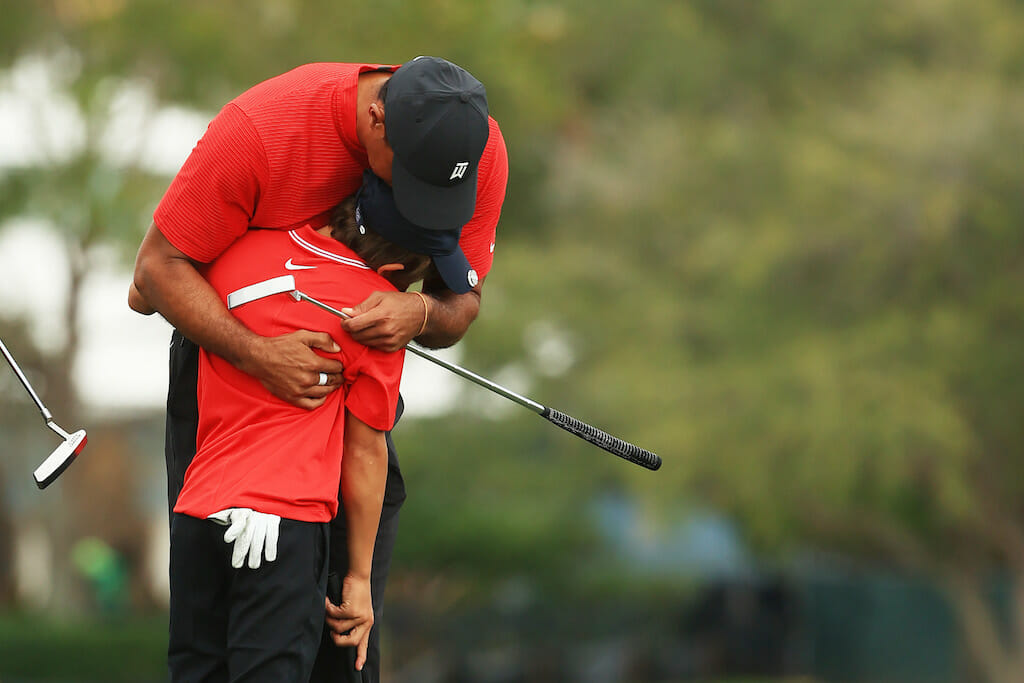 The 11-year-old Tiger cub was competing in a first 18-hole ‘public’ tournament and in a first PGA Tour sanctioned event on the Ritz Carlton layout. And didn’t the son of the 82-time PGA Tour winning Woods impress, not only swinging the clubs like dear ole dad but all the time producing the trademark Tiger fist pumps.

Team Woods, dressed in matching red shirts for Sunday’s final day, went into the round a combined 10-under and four shots off the lead and eventually finished with a second straight combined 10-under par 62 for a 20-under tally. Woods said: “I don’t think words can describe how Charlie and I were able to have this experience together. It’s memories for a lifetime.

Woods added: “I’m just proud. Just like at the Medalist, stay in your own world, enjoy. Our little world, we kept it as that. It was special for both of us. He’s not going to appreciate this at 11 years old. As the years go by, you start appreciating it more. I’m sure that we’ll have a lot of banter over the holidays and the years to come.”

Charlie was the only player in the 20-team two-day event to eagle the par-5 third hole during Saturday’s round with a PGA Tour tweet already generating some 8 million views such was the interest in the kid of the so-called GOAT. And it was schoolboy Charlie that got the team off to a great second day start with a birdie at the same hole in the better-ball last day format. And just like his soon-to-be 45-year-old father, there was a great fist pump from young Charlie when the putt had just enough legs to drop.

Team Woods eagled the par-5 fifth hole to move to a combined 13-under and then stormed home on the back of a second eagle of the round at the par-5 14th when young Charlie,  hitting off the ‘Charlie Tees’ and some 140-yards ahead of the back tees, cleared all the trouble to leave his father a short wedge and putt for a ‘3’.

Woods and son grabbed five inward half birdies with Charlie obliging by retrieving the ball from the cup each time his father putted out before ending, how they had started a day earlier, with a birdie for a second straight combined 62 for a 20-under total.

Team Thomas of Justin and his 61-year-old father, Mike won the event by two shots with a combined 25-under par over the two days. Team Harrington brought up the tail of the field with Europe’s Ryder Cup captain and son, Paddy posting a closing combined round 66 for a lowly nine-under par 36-hole tally. The Harrington’s began Saturday to be three-over after just two holes but to their credit did not drop a shot over the next 34-holes.