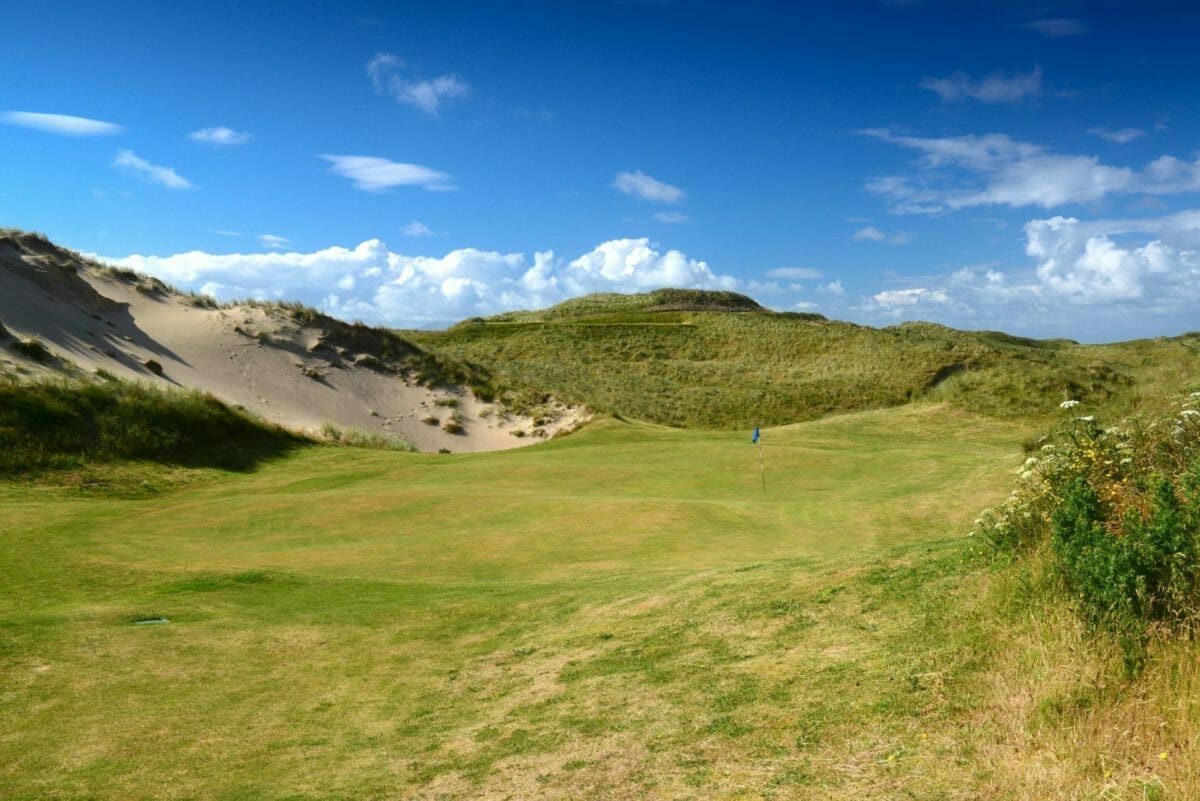 Green to tee view of this piece of golf heaven in Carne. By Kevin Markham

Ever since the return to golf was announced by our Taoiseach, I’ve felt an electric charge – like the dull hum of my razor’s adaptor – coursing through my veins. Call it goosebumps, pins and needles, static from touching a door handle… or maybe it’s just the tinnitus that has grown ever louder since the first lockdown began. Whatever it is, it makes you realise that you don’t know what you’ve got till it’s gone.

Over the past six weeks the constant reminders around the house have made clear how big the sport is in my life: the boxes of brand new Seed balls on the shelf; a tee lying under a table where it has languished for weeks, waiting to be put to use; my only crystal trophy drenched in dust so thick the year 2006 has all but disappeared; a lone pitching wedge by the back door, the mud in the grooves as hard as cement.

It feels as if we have forsaken this beautiful game. We haven’t. We’ve just been biding our time under a swell of anger. Who among us has not practised a swing with nothing in our empty hands but hope, the imagination of our mind and passion in our heart. Who didn’t dream of glory after watching Dustin Johnson slip on the Green Jacket?

Courses still growl with the sound of greenkeepers at work but with no flags in the greens, it’s like football without goalposts, like tennis without a net, like a Kardashian without a K. It feels wrong. But, on December 2nd, it will at last feel right. Flags back in, golfers on the fairway and the sound of metal on ball.

Why has the second lockdown proved so much harder than the first? It can only be because the first time was, well, the first time. We knew far less about the virus and ‘we were all in it together’, exhibiting a national unity that had us following the government’s directives because we believed – we hoped – that it would be enough to return us to some form of normality. And it did. Golfers showed that the rules could be followed successfully. We deserved a gold star for our efforts but that was probably only in our own eyes. Did anyone else care? No, not really… at least not until #golfgate. Morons, the lot of them and, despite the misnomer, Seamus Woulfe continues to drag golf’s name through the mud. Others have fallen on their swords while he has given himself no more than a paper cut… and the papers have feasted on him. Golf has become almost a swear word as a result.

Did #golfgate influence things against our beloved sport as we prepared for Level 5 lockdown in October? One suspects so and perhaps that is why we felt so cheated when golf courses were closed. Undoubtedly we also felt cheated because we had done such a good job that golf should never have been taken away from us. Or perhaps it is because we’re sick and tired of not knowing what will and will be allowed and when the closures will come. Covid fatigue? Absolutely, but we have to get on with it, do what the government and NPHET require of us because if we don’t we’ll be in and out of lockdowns throughout 2021… with or without a vaccine.

We have to put all that frustration behind us and forget how angry we got driving past an empty golf course and all those acres of open space when we’re heading for a cramped park to walk the dog. We have been given a degree of freedom to get back to golf. Crossing county lines to play the game remains a no-no, for now, and that means I will not be able to play just yet… but it does make me want to go and retrieve that tee and clean the grooves on my wedge. When the time comes I will be ready.

* I Dreamed a Dream is from the musical Les Misérables… I hate musicals.