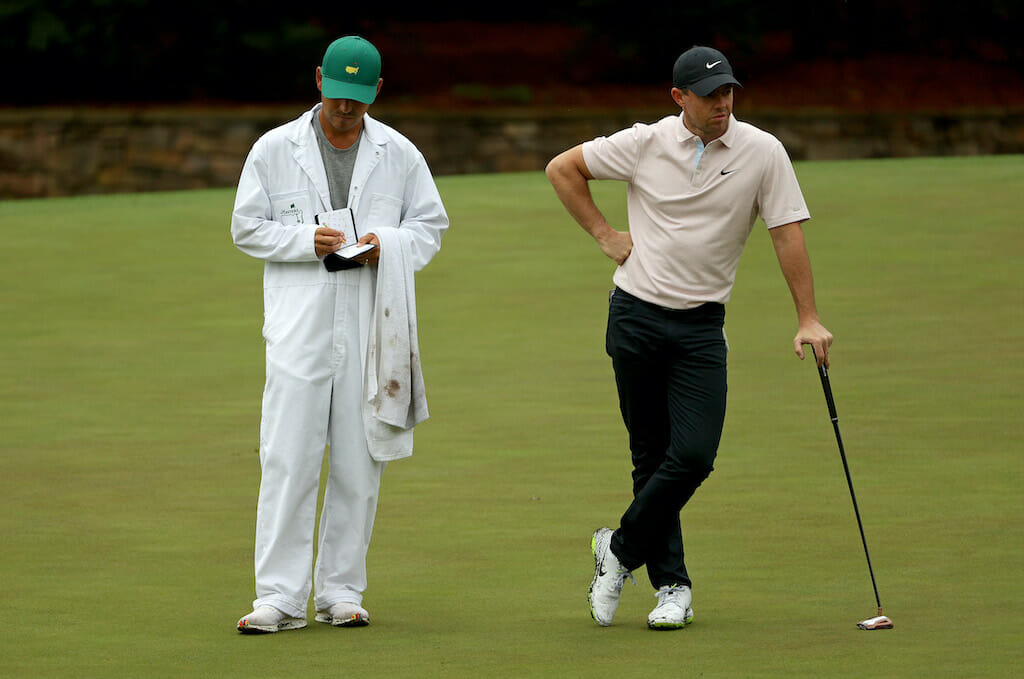 Former European Tour professional Gary Murphy believes that it might take a change in the caddie department to resurrect the Major ambitions of Rory McIlroy.

Speaking on Tuesday’s Off The Ball, The K Club professional was reacting to another Grand Slam miss for McIlroy when his chances of winning disappeared before they began in an opening round of 75 at Augusta. Many observers have questioned whether McIlroy’s partnership with best friend Harry Diamond is the best fit for the world number four and although they’ve had unquestionable success in the three years they’ve been together, Murphy remains unconvinced that the best man at McIlroy’s wedding is the best man to help him add to his four Major titles.

“From what I can see from watching in and walking around with them, Harry probably needs to be a lot stronger,” Murphy told Joe Molloy. “Does he [Rory] listen if he’s too strong? Does it affect Rory? It’s trying to find that balance. They’ve had a really good run together, there’s no denying that, but maybe if he freshened up? I don’t think he needs to get someone like a Stevie Williams because they won’ t get on but maybe a job share could be something to look at. We’re talking about tiny margins for him – a career Grand Slam. But it doesn’t matter how successful you are, every relationship gets stale on Tour.”

The question was put to Murphy whether or not it would be unfair to lay so much blame at Diamond’s door given some of the poor shot-making of McIlroy – think off the first at Portrush last year where pressure told at the Open, or duck hooking into the trees on 13 followed by a watery grave on 16 on the back nine of his opening Masters round last Friday. However as much as Diamond can’t hit the shots for McIlroy, and given there’s undoubtedly a mental battle going on amid the errors, Murphy is adamant that one of the most important roles of the caddie is to empower his charge with the belief to execute the shots, something McIlroy’s game has been lacking in the heat of Major championship battle of late.

“If you look back to Portrush last year on the Saturday with Shane Lowry and his caddie Bo, think how much he jockeyed Shane to be fully committed to understand the decision and be able to execute. The roll of the caddie is enormous,” Murphy noted.

“Everyone will talk about the team now behind players and their strength and conditioning coaches – they’ve got everything. That’s all required and has to be performed and executed in the modern game because it is a different sport now compared to what it was.

“But once you go out across that white line, there are only two people out there who will win the tournament: the guy executing the shots, obviously, but the message being told to the player is what helps him execute the shots. It is human nature that Rory will fight indecision and doubt for the four-and-a-half hours he is out there on the golf course. So, is the message coming from the caddie to help that coming across? Is it being told in the right way? I’m not really that sure that it is.”

The forensic examination into McIlroy’s performance is a reflection of just how much he is thought of around the world. Such is the height of his talent, it’s easy to forget that McIlroy enjoyed a top-5 at the Masters and moved up a place to fourth in the world rankings, something we’d be waxing lyrical about if it was Shane Lowry and not McIlroy achieving the feat. But there-in lies the frustration. It will be seven years when the Masters rolls around in April since McIlroy last tasted success at a Major but Murphy believes it would be impossible to fathom the 31-year old not doubling his four-major tally in time.

“When Rory is playing his A-game, it is the best in the world,” Murphy said. “This is a ruthless sport though and the margins are so fine. I don’t think though that Rory has to do an awful lot to get back to World Number One and winning another three or four majors easily. It is inconceivable to think that he will not win eight or nine majors in his career – without a doubt.”