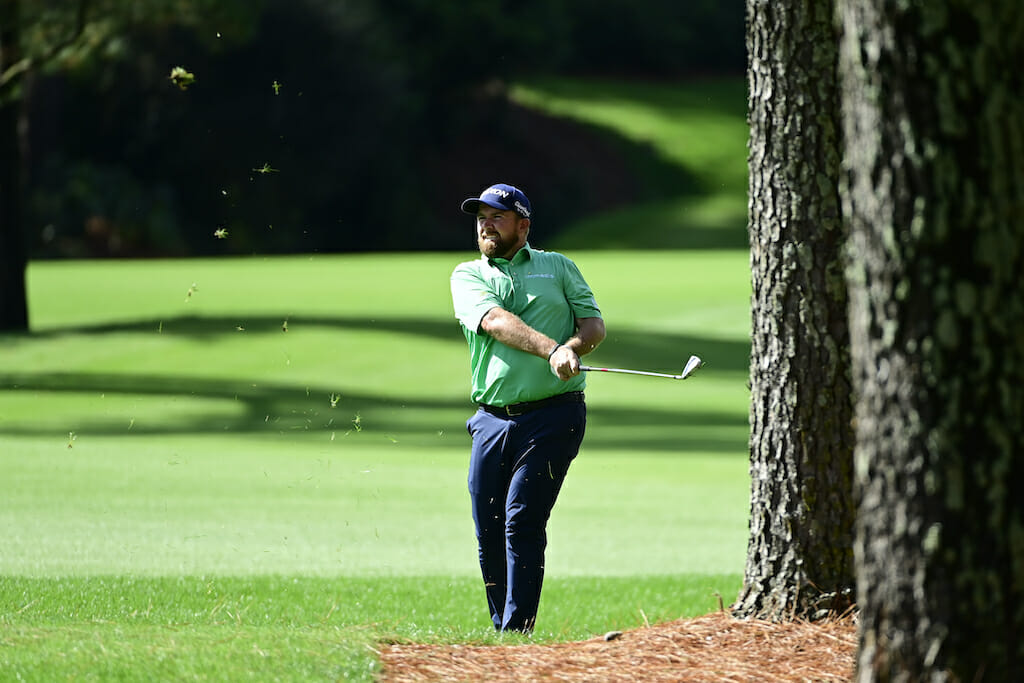 Shane Lowry watches his stroke on the No. 14 hole during Round 1 of the Masters at Augusta National Golf Club, Thursday, November 12, 2020.

Shane Lowry’s thrill to partner Tiger Woods for a first time in a Major was slightly spoiled in not matching the defending champion’s effort after posting a two-over par 74 on the opening day of the 84th Masters.

Lowry’s round of two bogeys and 16 pars left him trailing well down the board and nine shot adrift of early first round leader Paul Casey with the former Irish Open winner posting a blistering seven-under par 65. Lowry’s two-over tally was a 10th occasion in 11 rounds of the Masters he’s not broken 70 with his lowest score a 68 on day one in 2016.

“I can’t seem to get my head around this place,” said Lowry. “I played lovely in practice, really good going into it, and just off to a bad start. It’s not that I was chasing all day, but I just felt like I couldn’t get a putt to the hole.  I felt like I kept leaving myself nice putts underneath the hole and just kind of struggled to get the ball to the hole. But look, it is what it is. I’ll regroup tonight, and whatever time we do play tomorrow, I’ll be ready to go and try and shoot the best score I can.”

Casey earned a pair of Augusta National logo crystal goblets for his second hole eagle ‘3’  in a round that also included five birdies. Defending champion, Woods, who partnered Lowry, played his best golf all year in signing for a four-under par 68, and like Casey, produced a bogey-free round.

It was the first occasion since the 2009 PGA Championship that Woods has been bogey-free in a major and a maiden time he’s not dropped a shot on day one of any Masters. The only downturn for Woods, and all competitors, was there is a ‘no patrons’ policy this year something Lowry claimed was an advantage in jest to Tiger.

“I said to Tiger, with my draw, it’s a bit of an advantage not having any crowds out there,” he smiled. “I thought that was good. It was nice to play with Tiger my first time I was able to play with him. It is pretty cool. Though I didn’t want to get distracted by it today, and I don’t think I did, but playing with my golfing hero is just pretty cool around this place, and as the Open Champion playing with the defending champion, that was just kind of a bit of a surreal experience.”

The trio of Lowry, Woods and reigning US Amateur champ, Andy Ogletree had been due to tee-up at 7.55am local time but that was first put back to 8.05am with a 10-min delay to the start of the 84th Masters. However, the opening three groups off both the first and 10th tees, had only played one hole when a siren sounded to halt play due to storms that turned parts of the Georgia golfing gem into mini streams. Play was delayed for two hours and 40 mins making for an overall delay of 10 minutes shy of three hours.

It meant that Rory McIlroy, rescheduled to tee-off at 2.50pm local time, and 2019 Amateur winner, James Sugrue at 3.01pm would not complete their first rounds due to some three hours less daylight compared to a normal April Masters. McIlroy scrambled his way to even par through nine holes with one birdie and one bogey on the card while Sugrue bogeyed 16, 17 and 18 on his way to an outward nine of 40 having started from the tenth.

Lowry made his way to the 10th in what was the first time the Clara golfer had been drawn with the 15-time Major winning Woods. Lowry selected an emerald green/near-Augusta coloured shirt for only his fifth Masters and while Woods went with a 3-wood off the downhill 10th, Lowry had pulled out the driver sending his ball 322-yards down the fairway.

He found the green in regulation and then two-putted from 34-feet for a par before finding a right greenside bunker at the par-4 11th and sending his third past the flag only just managing, possibly due to the dampness of the course, in not rolling into the water. He then chipped to six-feet but missed his par putt.

Lowry made par at the next two holes but then clipped a branch down the left side of 14 and then in finding the green he three-putted for a bogey ‘5’ in what would prove his only other dropped shot of the day. For his remaining 13 holes Lowry was a picture of patience, scrambling when he had to, such as being well left and well short off the 18th but then getting his second to just short right of the green before chipping and then holing an eight-footer to save par. Then at the ninth, Lowry hit a booming 340-yard drive downhill leaving himself a wedge ahead of a 13-footer for birdie but with his putt just dropping to the right.

“I am very disappointed with my day, but I did enjoy my day,” Lowry admitted. “I just need to regroup now tonight. I played it really, really nice in practice and I played really well in Houston last week, so no reason why I can’t go out and shoot a good score tomorrow.”

Fellow Irishman Graeme McDowell arrived at the ninth, his last hole of the day, two groups behind Lowry’s three-ball standing on the tee at two-under par. It had been frustration for McDowell early on in his 10th Masters and a first Augusta tee-time since 2016.

McDowell had hit a 300-yard drive off 10 but then missed the green right in taking a bogey ‘5’ while there was the sight of him bent over his club after finding water guarding the green at the par-5 13th before two-putting from 10-feet for a second bogey. GMac also played a super second shot over the water guarding the par-5 15th only to three-putt for a par before superbly chipping-in for birdie at the 16th.

He got back to level with a birdie at the second and then into the red with a birdie at the par-3 third hole or his 12th of the round McDowell then jumped to two-under par after a great lay-up at the par-5 eighth hole and from around 90-yards he landed his third to five-foot for birdie. His drive at the ninth, albeit it travelled 319-yards was in the trees left and left him walking off with a humbling double-bogey ‘6’ to end his day then sharing 50th place at level par. It is the third time McDowell’s began with a first round 72 and also his equal third highest Augusta opener with a 69 on day one in 2009 his lowest score.