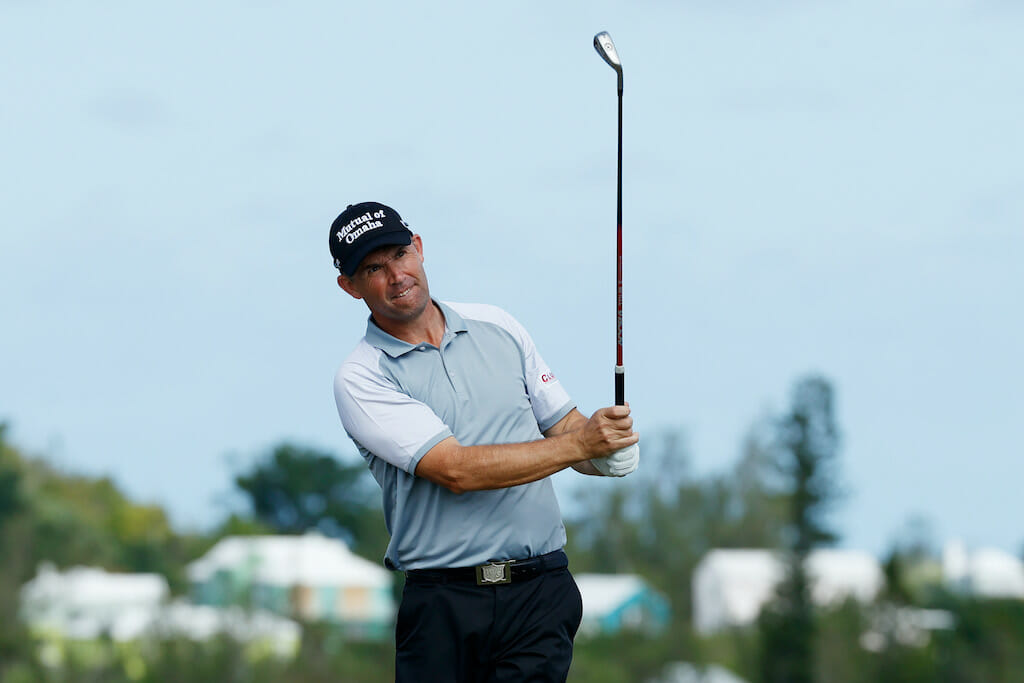 Padraig Harrington was headed to Houston, Texas buoyed by his top-30 showing in the Bermuda Championship. Harrington, who had been handed the opening day honour of teeing-up first, eventually posted a closing score of 69 for a six-under par total on the Port Royal course.

It was Harrington’s first event on the Atlantic Ocean island in eight years since capturing the 2012 PGA Grand Slam of Golf. American Brian Gay earned himself an invitation into the 2021 Masters winning with a birdie ‘3’ at the first extra play-off hole from compatriot Wyndham Clark. Both players had ended regulation play locked at 15-under par. Gay, 48, who bogeyed the 71st hole to lose a share of the lead, then birdied the last to tie Clark, before ending a seven-year winless drought for his fifth PGA Tour title.

Harrington had opened only his third US tournament this year with a four-under par 67 and despite a pair of 71s, he regrouped on the last day of the $US4m event to birdie five of his opening seven holes to reach the turn in 31 before playing the inward half in three-over with just the one birdie but also four bogeys. And then in something of a first Harrington provided a video review of his week aboard an island ferry heading back to his hotel.

“It has been an interesting week for me as I really had it going today on the front nine to be five-under after seven, and it could have even been a couple better”, he said.

“Unfortunately, I hit a few erratic wedge shots after that which had troubled me all week but my long-iron play and driving was good while I played the tough par-3s here this week well. I putted as well as I have been but then I missed a few short ones, so that was just a little blip but I am still really confident with my putting.

“It was a good week being back here in Bermuda and really nice being back here, so it’s been an excellent week over and congratulations to Brian Gay while Bermuda and the golf course were also winners this week, and looking forward to the Houston Open next week.”

Harrington has been a regular visitor to Houston but this week will be his first showing in three years. Europe’s Ryder Captain will join Graeme McDowell and Shane Lowry in Thursday’s starting $7m Houston Open among 20 major winners teeing-up in America’s fourth largest city. Seven will be past Masters winners, including Phil Mickelson, Jordan Spieth, Adam Scott, Sergio Garcia and Danny Willett and looking to hone their games ahead of next week’s November 12th start to the Masters.

Seamus Power, Harrington’s 2016 Rio Olympics team-mate, also signed for a closing 69 for a four-under par tally and a share of 37th and a $19,000 payout. It is the Waterford golfer’s first pay cheque of the 2020/21 PGA Tour season after missing the cut in his prior two events.