McSherry highlights her progress with Top-10 finish at Cowgirl Classic 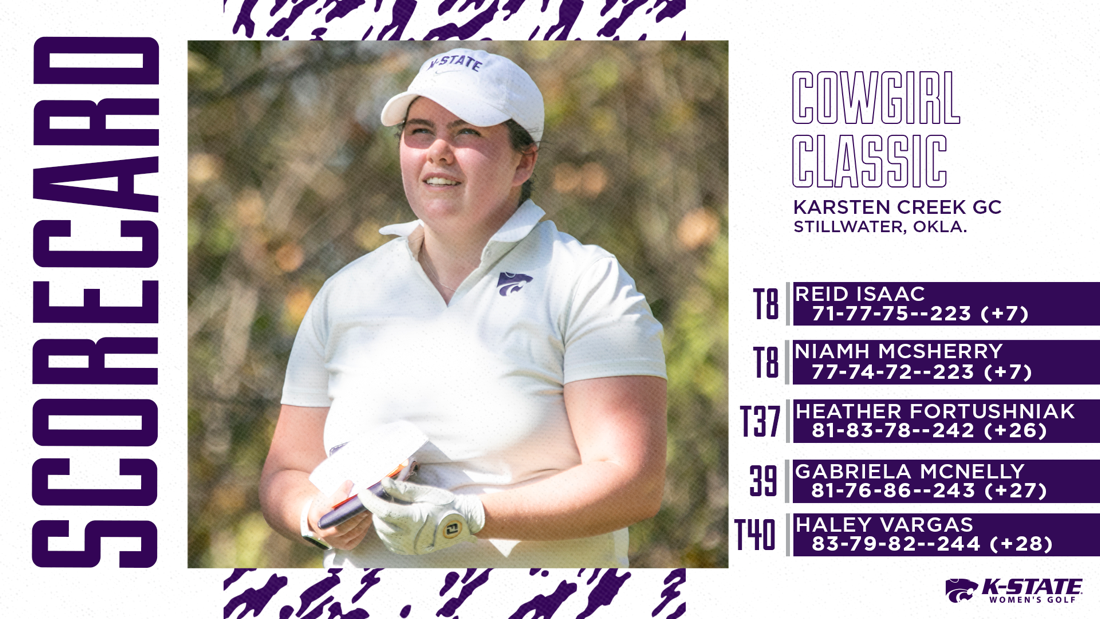 Ireland’s Niamh McSherry continued to impress for Kansas State as she climbed into the Top-10 and helped her college team close the Cowgirl Classic at Karsten Creek in fourth place.

On a day when scoring opportunities were limited by harsh weather conditions McSherry fired six birdies over the final 18 holes to move into 8th place alongside teammate Reid Isaac.

McSherry was one of just three players in the field to shoot par or better in the final round as the average score ballooned to 79.78 and she also doubled her tournament-leading tally for birdies to 12 while joining Isaac in a tie for eighth at 7-over 223. McSherry improved in every round on the par-72, 61,30-yard course and found a way to tackle hole No. 14 with a birdie in Friday’s finale after losing three shots there over the first two rounds – including a two-hole stumble to close Thursday’s play.

“That hole was actually playing so much harder today than yesterday,” McSherry said. “I was really disappointed with how I finished yesterday, I felt like I left myself down and the team down. I knew today that I was going out there and giving it for every shot.

“When I stood out on that tee, I knew that I wasn’t necessarily going to reach it in two – it was straight into the wind, I hit driver, then a rescue to about 60 yards and the pin was front left in a little more friendly position today. I flighted a wedge to 12 feet and rolled in the putt. I was really proud that I was able to put that and No. 15 out of my head, it was a new day. That’s something that I know three years ago that would’ve been difficult for me and it shows just how far I’ve come.”

“Conditions were really tough today,” McSherry said. “We already knew yesterday that it was going to be tougher, and the wind was as bad as it was yesterday but coming in a completely different direction – it changed the course a lot. I was super proud of how hard I worked out there. I had a couple of bad holes, but every shot was a battle and I knew that from the get go. I was just really happy that I was able to stay patient and I worked really hard every hole to fight for every shot.”

“I’m really proud of them,” K-State head coach Kristi Knight said. “The conditions made it really difficult today from the very start. Anytime in the final round that you can move up on the leaderboard is good and to do it on a day like today, where more than half the battle is mental, your attitude and how you approach it, is impressive. We still had a few problems out there, but the ladies did a good job and had a good attitude. We can’t complain about the weather or let that dominate our thoughts.

“The scores are going to be higher with the conditions, so they did a really nice job, especially Niamh – she had a great round and Reid had another solid tournament. Heather bounced back after a tough day yesterday. There is still a lot to work on and improve, but I am pleased with this result.”

The fourth place finish in Stillwater marks an end to the shortened fall season for the Wildcats. The next time they are scheduled to compete is on February 1-2 in Dallas at the Trinity Forest Invitational, usually played in the fall but moved this year due to COVID-19.