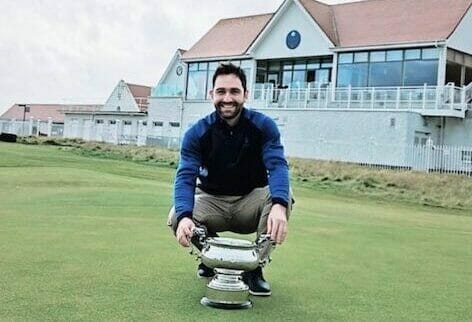 Portmarnock Links professional Brendan Walton said it was “such an honour” to get his name on the famous Moran Cup after cruising to a four stroke win at Royal Dublin.

The nephew of Ryder Cup legend Philip followed in his uncle’s footsteps after Philip claimed the title in 1984 at Castle Golf Club.

Delighted to have won The Moran Cup @Royaldublin1 it’s such an honour to have my name on the trophy along side so many revered Irish PGA Professionals over the years☘️! Big thank you to Royal Dublin & @PGA_Ireland & well played lads ?? pic.twitter.com/K4vx2YcQCc

The highlight of Brendan’s round undoubtedly came at the 16th hole on the prestigious links where he drove the green before rolling in the putt for an eagle two en route to posting a three-under winning score of 69.

“Delighted to have won The Moran Cup at Royal Dublin,” said Walton on twitter.

“It’s such an honour to have my name on the trophy alongside so many revered Irish PGA professionals over the years.”

Walton was in a class all of his own on Monday with Mullingar’s James Quinlivan, St Margaret’s Shane Jenkinson, Sutton’s Paddy Devine, Liam Power and Stephen Quinlan left trailing in his wake in a five-way tie for second on one-over par.