McIlroy will struggle to win at Winged Foot, says McGinley 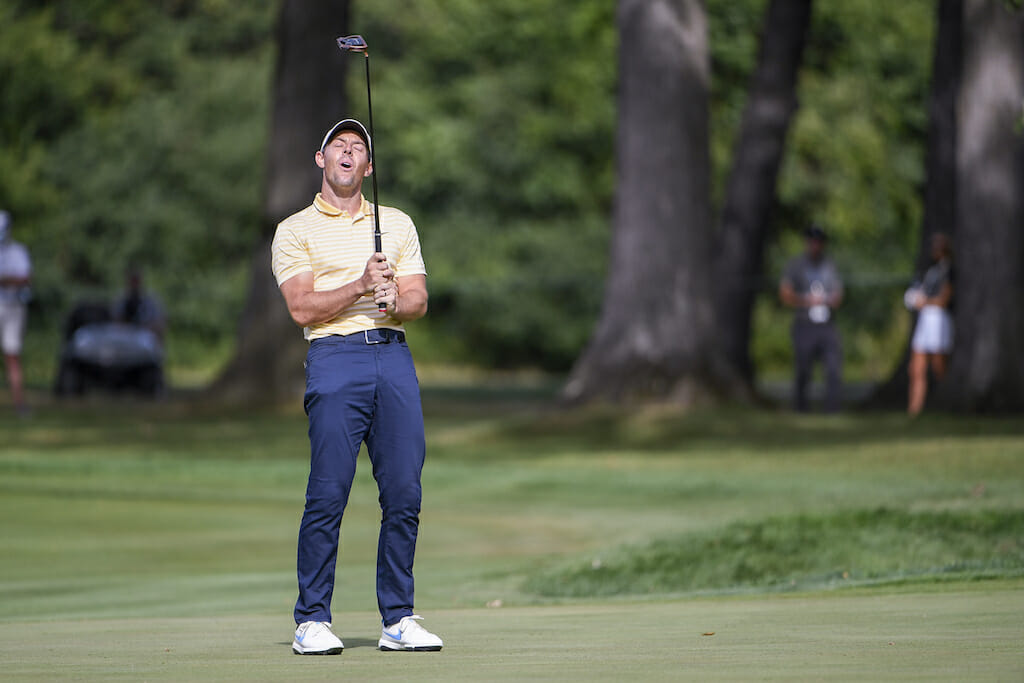 Sadly, the closest he’s come since was a distant T2nd behind Francesco Molinari in the 2018 Open Championship at Carnoustie.

And fellow Irishman Paul McGinley, in speaking to the Daily Mail and The Sun, reckons McIlroy is unlikely to break his long run of Major droughts later this week at Winged Foot on Long Island.

“I have my doubts,’ says McGinley. ‘You could argue in the past few months, since the end of lockdown, Rory’s been in his worst form for 10 years.

“I feel he is better when he’s got a point to prove rather than the really happy space he is in at the moment with the baby coming along. He’s enjoying it and rightly so. But is it going to aid his mindset? I’d question that.”

Of course, it’s not going to help McIlroy’s cause that those charged with setting-up Winged Foot are predicting a ‘Plus 8’ winning total in only the second major of this COVID-19 hit year.

If so, it would be the highest 72-hole victory tally in a major since Paul Lawrie’s six-over score in capturing the 1999 Open Championship at Carnoustie.

But then McIlroy took a real liking to Olympia Fields, a former U.S. Open host venue itself where the BMW Championship was recently staged.

McGinley added: “‘You can’t be too critical because Rory has already had a phenomenal career. But if he wants to be considered one of the greats of the game, I feel there’s a lot of things still to be achieved.

“He likes courses he can take by the scruff of the neck but this will be a really difficult test.

‘We saw how Tiger could adapt when he won the 2006 Open at Hoylake hitting just one driver all week. I think that patience, to just slowly run the marathon and get the job done, that’s what Rory needs if he’s to take over from Nick Faldo and become the best golfer that Europe has produced.

“Has he got it in him to do it? Yeah, absolutely. It’s a question of getting focused and saying: ‘I’m going to show you, I’ll prove you wrong.

“Let’s hope he manages it. Wouldn’t it be great to see him come through and perform on a course this difficult?”

My colleagues at the Daily Mail and The Sun naturally sought McGinley’s advice on who will win the 120th hosting of the U.S. Open.

And McGinley likes the chances of an English golfer who captured the 2013 Irish Open at Carton House.

“If this was a normal PGA Tour set up, you’d certainly be highlighting those three but, because it will be a unique test, there’s a lot of other people in the equation too,’ said McGinley.

“I’m looking at guys like Xander Schauffele as the sort who’s ready to burst through and win a major. Or a steady player like Webb Simpson, who’s already won one US Open and looks ready to win another. I like Tyrrell Hatton and Matt Fitzpatrick, two players who do well on tough courses.

“I rate Paul Casey’s chances as well. We saw a different side to him at the last major, where he was unlucky not to win in San Francisco last month and he’s after that major to complete his career.

“We’ve been starved of European victories in American majors but I’m excited about this one. I think the course sets up well for our guys and I’m thinking this might be the one where we finally have plenty to cheer.”