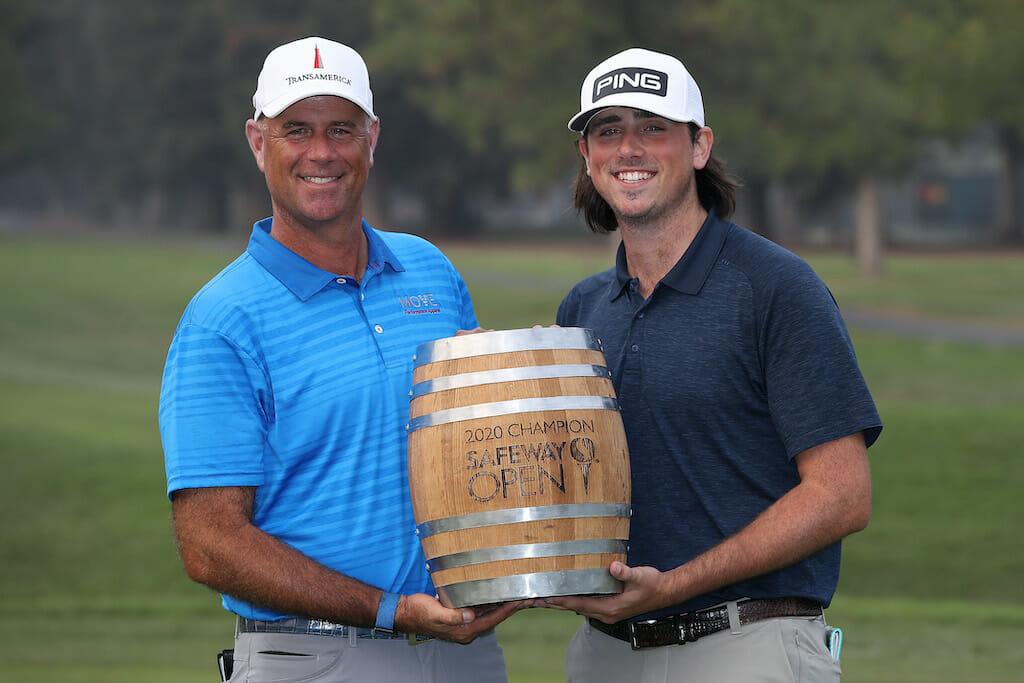 Stewart Cink celebrates with the trophy and his son Reagan after winning the Safeway Open. (Photo by Sean M. Haffey/Getty Images)

One of the best golf news items over the weekend was Stewart Cink ending an 11-year winless drought to capture the Safeway Open at Napa in California.

It was on a sunny afternoon in July 2009 when Cink, then wearing a standout lime green shirt and cap, was last handed a trophy and that being the famed Claret Jug in winning the Open Championship at Turnberry.

It was also a victory that ensured Cink remained inside the top-10 on the World Rankings for some 40-weeks.

He teed-up last Thursday ranked a lowly 319th and with the win seeing him jump to 151st and in the process collected a first prize cheque for $1,188,000 along with an invitation to contest the 2021 Masters.

But there is so much more to Cink’s actual 14th pro career success.

Firstly, there was no one more happier for Cink than his caddying son Reagan who was aged just 12 when his father last tasted success.

And waiting for Cink at the 18th green, in the heart of America’s wine-making capital, was his wife, Lisa who had grabbed her husband by the shirt front earlier on Sunday morning and pulled him in close with some vigour. “Do you know how good you are?” she asked firmly while staring him down.

It was a slightly aggressive move but it was done with nothing but love. This was a wife who knows a thing or two about fighting tough battles trying to inject some confidence into her man. And it was a kick in the butt moment Stewart needed as he contemplated heading out to try to break a win drought spanning over 11 years.

Her words came after Cink had confided in her, saying “I’m really excited for today and I’m really scared.”

“She had some great words. She said, “You know what? You’re loved no matter what you do. No one expects anything out of you. I know you can do it and you know you can do it … you’re with your son … so just go out there and have a great time,” said Cink afterwards.

It helped Cink feel an overwhelming sense of gratitude to even be in a position to win again after what had stretched to a 4,074 day drought. Indeed, son Reagan was acting as his caddie this week.

It was also his other son Connor’s birthday. Reagan had recently become engaged. Things were good in life.

The win was Cink’s sixth on the PGA Tour and also probably the sweetest.

It’s well-known Lisa had a cancer scare some years back in needing to have cancerous cells cut out of his face and little wonder there were emotional family scenes at the 72nd green.

“I definitely had a lot of emotions out there today,” he said. “I just was overcome at a few times with a feeling of gratitude and just feeling like how fortunate I am to be in the position that I’m in.

“We call it when the bullets are flying out there. The last four or five holes of a PGA Tour event your name’s on top of the leaderboard, but think about it, I’ve got my son caddying for me, my wife is in almost five‑year remission now and she’s walking out there just on the side of the ropes, and at 47 I’m able to compete at the highest level and now not just compete, but win.

“I walked over to the side of the ropes after 14 and I grabbed Lisa by the arm and I just told her how grateful I was at that moment. I always try really hard to keep my heart in the right place when I’m competing, that’s just one of my main goals. I want to win, but I don’t want winning to be something that I have to do to like fulfil myself.”

Cink admitted he had come to terms with the possibility he might never win again during his long drought. The calmness at that moment was in fact a huge factor. As he heard a roar behind him that came as Higgs made a long-range birdie on the 14th, Cink responded with a 20-foot birdie of his own on the 15th. He then birdied the 16th.

“I came to terms with the possibility that it might not happen, I did, but it’s not something I was settled or content with. I still compete to try to win and I work hard on my game and I just try to squeeze every little bit of juice I can out of my golf game, out of that lemon,” said Cink.

“In that regard, I’m no different than a 20‑ or 25‑year‑old kid out here who’s still got like his entire career ahead of him. I’m still working like crazy to try to be the best golfer I can be, but there was probably a time where I felt like maybe age might have caught up with me and maybe I might have had my last win out here, but I wasn’t ready to concede that. I just knew that if I got back into position again, that if the time’s right, I can hang in there.

“If you go out there thinking you’re not going to lose it, then you’re wrong and you’re going to be shocked. So I was prepared to lose it. I mean, for crying out loud, I left a five‑foot putt short on the 17th hole that I needed to make,” Cink explained.

While Lisa had the golden words prior to the round, son Reagan had the gilded tongue during the round. The 23-year-old is not a regular caddie, in fact this was just his fourth time carrying the bag. As they came off the second green Reagan said, “Dad your tangibles are really, really good right now. Your club, your ball, your tangibles, like your ball’s doing what it’s supposed to do, you’re putting, your ball’s starting online. Let’s just take care of the intangibles today.”

Cink was impressed. And he relaxed.

“That is like great advice for someone who’s caddied three or four times in the PGA Tour and hasn’t played in a golf tournament I don’t think since high school golf,” Cink said.

“He did a great job keeping me positive and keeping me loose out there. We just had a really great time from the get-go all week. He’s not just a ceremonial caddie. He understands golf to the very, very highest level. It was really a great experience.”

The win will see the 47-year-old now fully exempt through this season and two more after it meaning he will get through to his 50th birthday when he becomes PGA Tour Champions eligible.

He will also find a place in the 2021 Players Championship and, as mentioned earlier, into the 2021 Masters and the 2021 Sentry Tournament of Champions in Maui.  It means he will have to cancel a family ski trip in favour of one in the sun but wife, Lisa wasn’t complaining.

“This is the culmination of so many things. It’s so special to have Reagan and Stewart do this together,” she said.  “I’ve watched him work so hard for so many years without the results, so for those to show up now is just an amazing blessing.”

Again, well done to one of the nicest guys on the PGA Tour and his family.