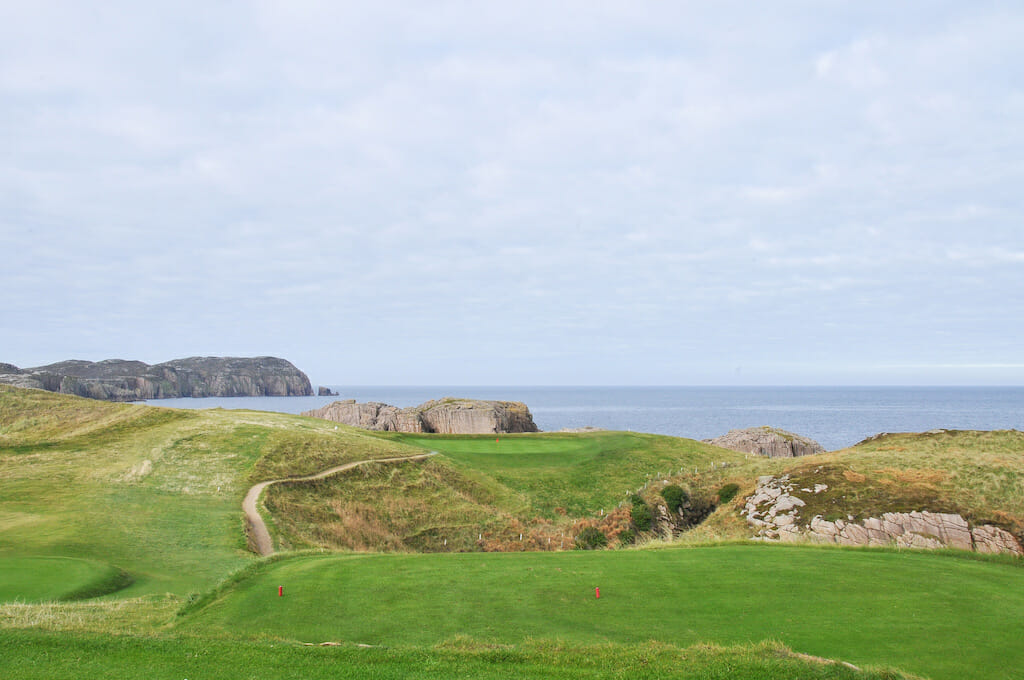 It was fantastic news when Golf.com published their Top 50 Best 9-Hole Courses in the World, and Ireland had four entries. Cruit Island, Mulranny, Castlegregory and Bushfoot were all included.

Mulranny came in at 16th, and the review read as follows:

“Expert’s take: Guarded by electrified fences, the greens are surprisingly large and full of character. Punchbowl and plateau, embankment and benched, their sites are well varied, often at the end of some astutely occupied seaside terrain. The hardly believable left-to-right cant of the short 8th, perched beyond hidden burn with village in the distance above, will be a favourite.”

Castlegregory was at 21st:

“Expert’s take: Another brilliant seaside links test, Castlegregory is everything you’ve come to expect about European links golf at half the length. This par-68 Irish test comes in at a shade over 5,800 yards, but best of all? Its proximity to the water leaves it impervious to frost, making it a year-round destination for golfers of all ages.”

Bushfoot came in at 36th:

“Expert’s take: Bushfoot is a fond memory for me. My mother and daughter once joined me for a quick evening 9 holes. The course is on the cliffs between Royal Portrush and UNESCO World Heritage site Giant’s Causeway. Play is suitable for beginning golfers like my daughter while simultaneously presenting an interesting links course to the scratch golfer playing off its fescue turf running up and down its sloping par-4 holes.”

But it was Cruit Island that stole the show, making the Top 10… at 10th, with the following review:

“Expert’s take: The landforms on this rocky, seaside routing are almost Seussian, like you’re playing golf at the edge of the world — in a sort of netherworld where rules don’t apply. But the holes are legit, if short in spots, and the tiny green sites are perched in some truly phenomenal, unlikely places. Played it in a downpour accompanied by howling winds. Would love to go back but it’s so far out there in the northwest, I sorta doubt I ever will.”

It will undoubtedly boost the profile of this wonderful course, tucked away along the top edge of Donegal… a county that is blessed with golf courses and rivals Kerry as Ireland’s golfing county. Lest we forget, Ballyliffin is promoting its brand new Pollan Links, a 9-hole par three course designed by Pat Ruddy, Narin & Portnoo has recently reopened its Gil Hanse-upgraded links, and Rosapenna has the St. Patrick’s Links opening next year after a complete makeover by Tom Doak. Doak and Hanse are two of the biggest names in the world of golf design right now.

Cruit Island will always be a bit off the beaten track but with Rosapenna (63 holes in all) and Narin & Portnoo set to make a big splash, Donegal will become a destination to rival the south west among global golfers. Rather conveniently, Cruit Island is located between the two… assuming you follow the Wild Atlantic Way, which also takes in the 18-hole links at Dunfanaghy and the 9-hole courses at Gweedore and Cloughaneely.

There have been rumours swirling about for years that Cruit Island might be adding another nine but whether that happens or not, this new ranking will certainly see more golfers making the trip to a remarkable little but explosive links. Play the par three 6th hole and you can be sure you’ll be telling your friends about it for years.

Having four on that Top 50 list, when there are roughly 85 9-hole courses on the island, is a significant achievement but, as an Irishman, I would proffer that we could have had more.

We have riches in short courses. Pick up Ivan’s book and go and find out for yourself. There’ll be one closer to you than Cruit Island, I’m sure.