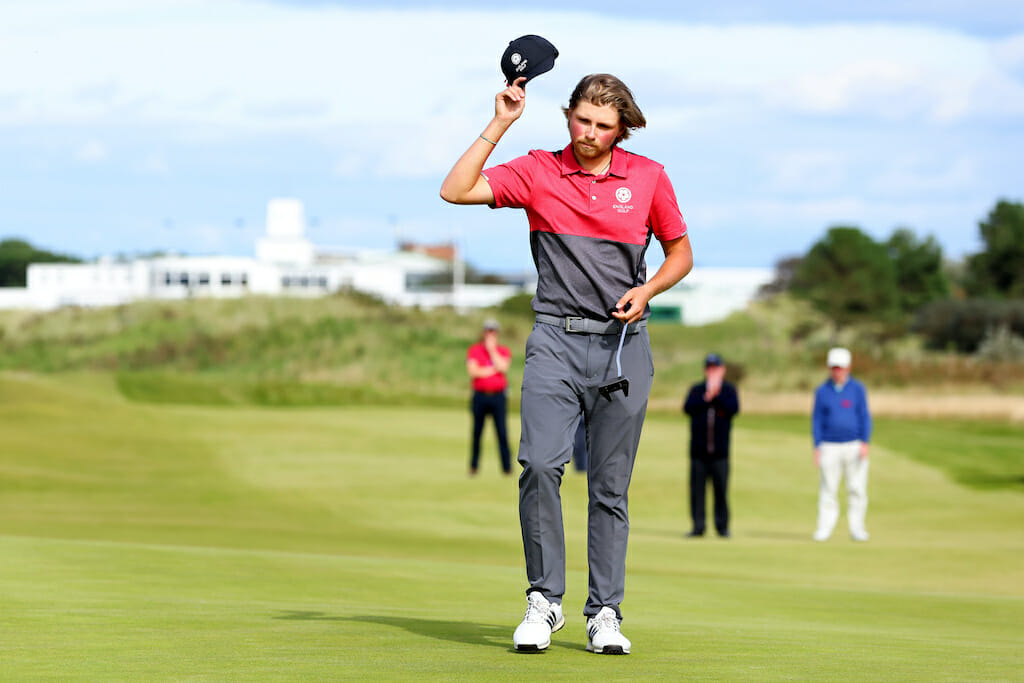 The Englishman showed composure over the renowned links in Southport to defeat fellow Englishman and good friend Joe Harvey, 23, in an exciting 36-hole final.

Lansdown member Long was the first to make a move in the tie, making a birdie three at the 5th hole to take the early advantage before quickly giving it up with a bogey four at the 7th. A conceded hole at the 8th saw Long regain the lead which he extended to three up by the 11th hole.

Losing his tee shot at the par-5 15th, Long conceded to his opponent with Harvey also winning the 16th to close the lead to just one hole. However, Long was quick to reaffirm his presence in the tie with a birdie at the 17th to go two-up and head into the clubhouse for the lunch break.

Played in glorious weather, a far cry from Tuesday’s stormy conditions which saw the first round of stroke play qualifying abandoned, Long opened with a bogey five as the match resumed. While Harvey recorded wins at the 19th, 23rd and 27th holes, he was unable to peg back his friend’s lead.

Long recorded a 4&3 victory, to become the first Englishman since Harry Ellis in 2017 to win The Amateur Championship.

“That sounds amazing, 125th Amateur Champion has quite a nice ring to it,” said Long.

“I was feeling nervous, we both were. My game plan was just to try and stick in the present as much as I could, forget about all the rewards and benefits that come with winning. I hit a few ropey shots in the first round, but I started to tee my driver down and get it back in play. I felt like I was pretty solid overall. This afternoon again I was hitting driver well and holed a few nice putts as well which was cool. I just had it in play all the time and felt in control.

“On the 14th, the par-3, that was a big putt, it was probably 30-40 feet which was huge, it was massive and gave me a bit of momentum. On the last I holed a nice one but I had quite a few close shaves out there as well.

“Walking up to the tee on 14 (the 32nd hole) my heart was racing, but I got over my tee shot and stuck to the process, thinking about where I wanted to hit it on the green. I hit a really solid shot and then over the putt I was looking at the line and almost forgot about what comes with it if I hole it and Joe (Harvey) misses. It literally just missed.

“On the final hole I didn’t really play it as well as I wanted to, to a tough pin, I was left with 15 feet. Joe missed his eagle putt and I just saw the line, read it well, and rolled in the putt. Goosebumps really, as soon I holed it, it all hit me. I am just so pleased and can’t believe it really, it’s all so surreal.

“I was never behind and just stuck at it. I have been behind in a lot of matches before and still turned it around but it is always hard when you are up against it. So it was nice to be in control. I thought to myself not to do anything stupid.

“It’s really good and hard at the same time because we both wanted to do well. He is a really good mate and when I win it is hard to see him lose. But it is all part of the sport we play and the match was played in great spirit, we enjoyed it out there.”

By virtue of his triumph, the 23-year-old gained exemptions into The 149th Open at Royal St George’s next year, and by tradition, an invitation to play in the Masters Tournament and an exemption into the US Open.

Ranked 103rd on the World Amateur Golf Ranking , Long was never behind against Harvey as he came out on top of the 120-player international field who assembled at Royal Birkdale for the club’s fourth staging of the championship.

Played without spectators due to the COVID-19 pandemic, Long didn’t let the lack of crowds get in the way of his excellent play. His day included plenty of highlights, particularly on the greens, where his superb putting skills included draining a clutch 30-footer for par to halve the 14th and an impressive 40-foot birdie putt at the 25th hole.

After The Kendleshire’s Harvey recorded back-to-back bogeys on the 28th and 29th holes, Long moved four ahead with seven holes left in the match. The pair traded pars on the next three holes.

Long is the 51st English winner of The Amateur and joins a list of past champions that include Major winners José María Olazábal, Sergio Garcia and, more recently, Matteo Manassero and Romain Langasque.

The 126th Amateur Championship will be played at Nairn and Nairn Dunbar in Scotland from 14-19 June 2021.