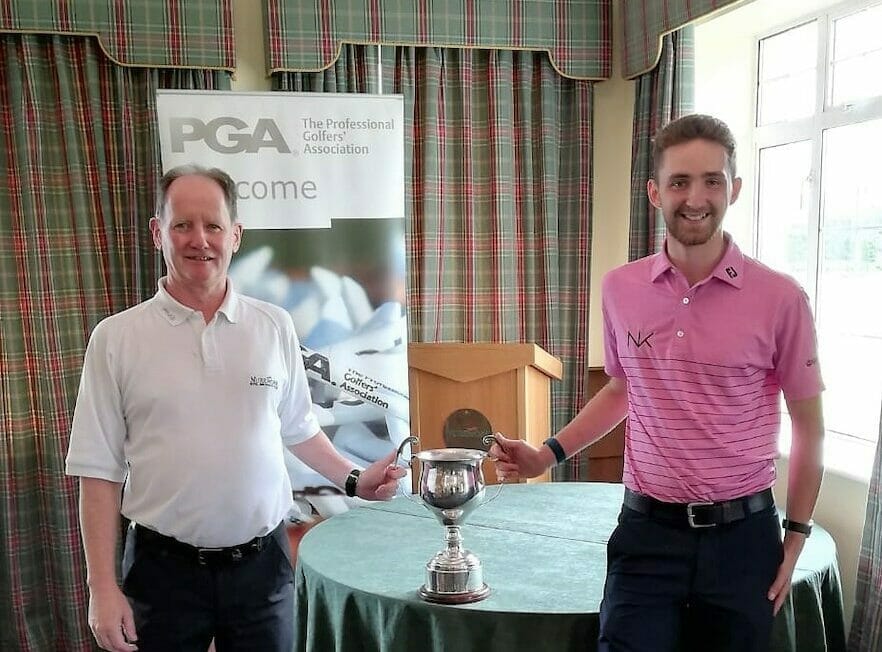 In doing so, the 21-year-old added his name to a list of former winners that includes David Feherty, Damien McGrane, Simon Thornton and Michael McGeady.

“I brought one of the club’s Senior Cup men, Ryan McCullough, with me to the pro-am because I wanted to see how he would play the course,” said Nathan.

“I have played in this event for a couple of years and made a bit of a mess of it to be honest. I wanted to see how he would play and how he would navigate it.

“I got plenty of tips out of him and the odd slap on the wrist for hitting driver at certain holes.”

Kernaghan posted opening rounds of 70/73 (-1) to lead by four at the close of play on day one. Torrential overnight rain at the Co Monaghan venue forced tournament officials to reduce round three to 16 holes and Nathan extended his lead to five shots.

He added; “The conditions for the morning round on day one weren’t too bad.

“I got the best of the weather and I knew that I had to take advantage because the conditions in the afternoon were going to be very tough.

“Once we got to holes 11 and 12 it started to get pretty scruffy. Like everyone else, I was just trying to crawl over the line and get into the clubhouse without causing any real damage to my score.

“When the third round was reduced to 16 holes I saw that as a positive. It played into my hands even more because there were fewer holes for people to try and catch me.”

Nathan has recently finished his training and hopes to embark on a teaching career once qualified.

“I left school early to go down this route,” he added. “This win will hopefully give me a bit of impetus to get out and compete a bit more. I’m already looking forward to the Irish Championship at the end of the month.”

Meanwhile at Malahide, it was two experienced campaigners who topped the leaderboard at the Philip Walton Pro-Am supporting St Francis Hospice.