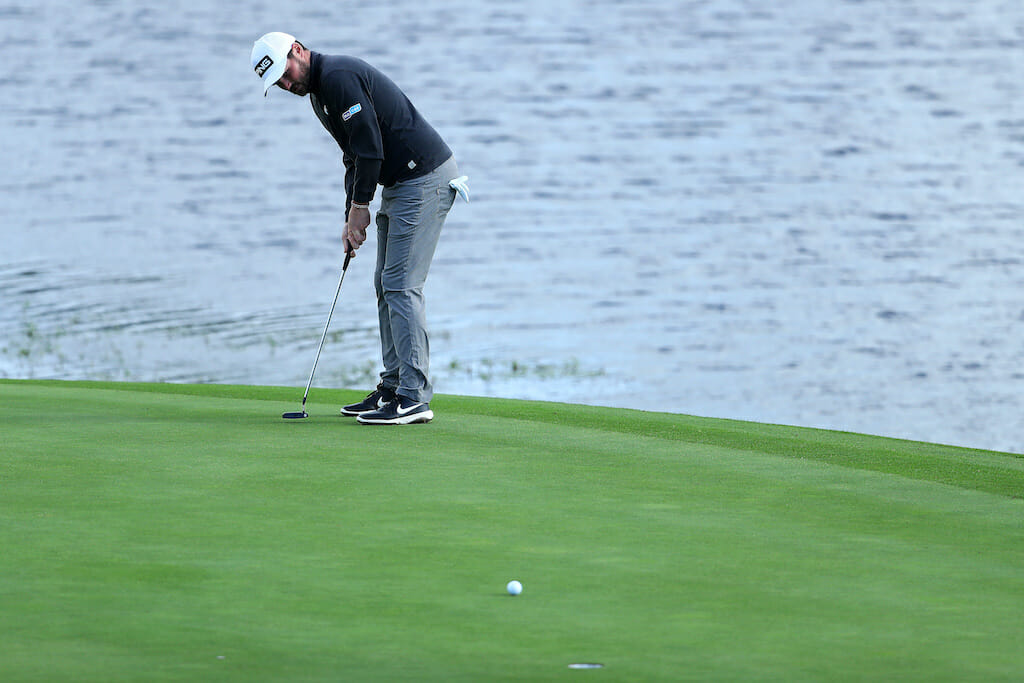 Cormac Sharvin fired his best round of the week – a two-under par 69 – to leap nearly twenty places up the leaderboard at the ISPS Handa Wales Open on Saturday.

The Ardglass professional took advantage of better scoring conditions at The Celtic Manor Resort, firing four birdies and limiting the mistakes to only two dropped shots to move just outside the top-20 at even par.

That’s just seven shots shy of the summit of a congested leaderboard where Sebastian Soderberg and Connor Syme share a three-shot lead heading into the final round with the chasing pack including former Ryder Cup stars Edoardo Molinari and Thomas Pieters.

Swede Soderberg is chasing a second title in as many years, having overcome four-time Major winner Rory McIlroy in a play-off to claim his maiden win at last year’s Omega European Masters. Syme, meanwhile, is targeting a first European Tour title and a wire-to-wire victory, having come close to winning last week’s Celtic Classic at this same venue.

The Scot birdied the difficult par five 18th hole for the third successive time this week, and the fifth time in seven rounds over the Twenty Ten Course, to sign for a second successive 70 and ensure he did not relinquish his place at the summit – where he has finished each round this week.

“It was a nice way to finish,” said Syme. “I felt like I played really solid today and just never got any putts to drop unfortunately, so I was saying to my caddie there, it can all be forgotten about if I manage to hole that putt at the last. So it was a perfect way to finish.

“I hit it close with a couple of five irons, really good shots and didn’t capitalize and a three-putt as well but it was just one of those days where nothing’s easy. It’s difficult no matter what, and putting might like seem like the easiest part but it’s not. You’re getting battered all over the place. I’m not going to look into it too much, it was a great to finish on the last and hopefully I find that rhythm all day tomorrow.

“Finding myself in the same position as last week, I’ll just try and do the same stuff I’ve been doing all week. I don’t think it’s going to be quite as windy tomorrow but it’s a different challenge with that compared to last week. Pars will probably more your friend than birdies whereas last week you felt you had to attack a little bit more. It’ll be the same game plan as last week and try give myself a chance coming down the back nine really.”

Soderberg carded a bogey-free three under 68 to join Syme at the top, three shots clear of Sami Välimäki – who has won already this season having picked up his first European Tour title at the Oman Open. The Finn carded a 67 for a four under total.

“It’s probably one of the better bogey-free rounds I’ve ever played,” he said. “I hit a lot of good shots, always kept the ball in play off the tee and my short game was just perfect every time I was in trouble. It wasn’t stress free but it was very good.

“When my short game is as good as it was today, these conditions probably suit me better but you never know. Some weeks when I’m hot with my wedges, it’s better suited to good conditions, but if I keep it up like this, I’d chose these conditions for my game.

“It feels great to be in position, I just try and stay patient, If it’s the same wind tomorrow, it’s so easy for it to just get away from you so every shot is a battle, even in the downwind holes. If you start losing focus it’s easy to make some big numbers. I just need to keep battling shot by shot.”

Molinari, who starred in Europe’s Ryder Cup victory at Celtic Manor ten years ago, and 2016 Ryder Cup player Pieters were a shot further back on three under par after respective third rounds of 68 and 69.

As for the other Irish in the field, there was little moving day progress for Jonathan Caldwell or Paul Dunne. The former returned an improved even par 71 to sneak just inside the top-60 at four-over par while the latter returned a two-over par round of 73 to slip just outside the top-70 at plus-six.