Marc Boucher from Carton House holds the lead after day one of the Mullingar Scratch Trophy. The 23-year old carded an opening round 67 (-5) which included five birdies and a hole in one at the par three 5th hole.

The Dubliner, playing in the first group out,  had to endure a 2.5 hour delay due to fog in what is the first event in the Bridgestone Order of Merit.

“It was a solid round, I was happy enough with how I played. I got off to a little bit of a slow start through the first three but then obviously it’s a bonus getting the hole in one, that sort of kick-started my  round. It felt like I made birdies where I should, a couple of short par fours and the par fives. I was really happy with the round”.

Having arrived at the course at 6am, Boucher knew a lengthy delay was inevitable. One which ultimately saw round two cancelled as a result. 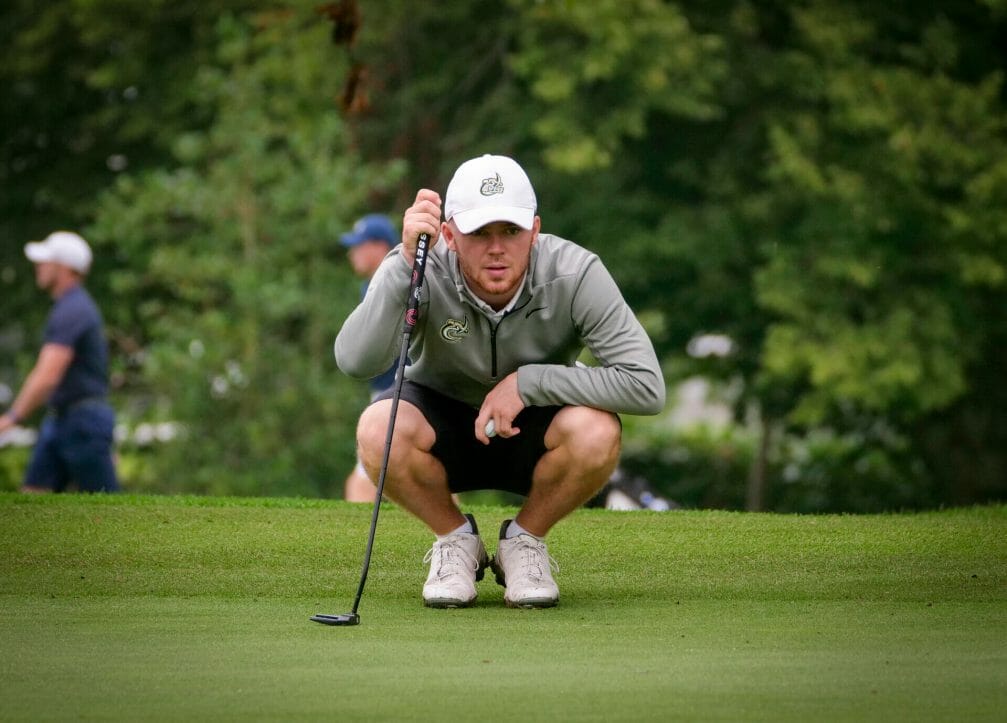 “I sort of just switched off really, and then you have to get back into the green zone when I got the email to say we were out in a half an hour so I went through my warm up again and  I feel I dealt well with it. I was just thinking switch off and chill in the car for a bit. I’m glad I got started on the right foot when we kicked back off”.

Boucher, who is without a championship win in over six years, is a past Irish U15 and Scottish U15 Boys Champion, winning the titles in August 2011. A former student at  the University of North Carolina, Boucher returned home at the onset of the COVID-19 pandemic.

“I was over  in college in America for my last year  so obviously when the Coronavirus sort of hit we had to call that short. I got back around mid-March and didn’t really touch a club for a while. I had the duvet set up  in the back garden to keep ticking over but I was raring to go. I played a lot in the club and  did a bit of practice and as soon as the championships came back around I felt like my game was in good shape. I’ve been out of the winners circle, so I need to get back in there.”

Leading a group of players on -2 is Amateur Champion James Sugrue. The Corkman getting off to a slow start before playing the last six holes in three-under par.

“To be  honest I didn’t play great for the front nine, even the first ten holes I wasn’t hitting the driver well at all, the thing that is usually my strongest point of the game, I was just winging it everywhere.

“I just kind of held on to it, my chipping was unreal, every time I had a chip it was inside a foot and without that I would have definitely been a few over. I’ve figured something out and started hitting it a little bit better. Coming in here there are a good few birdies chances .“I remember Justin Rose saying last week that he almost stole a few from the course, I almost feel the same today. I definitely scrambled around pretty well.”

With round two cancelled due to the fog delay, the top 39 after today’s round progress to the final 36 holes on Sunday. Sponsored by Sherry Fitzgerald Davitt & Davitt and Pinergy, the Mullingar Scratch Trophy is run in partnership with GUI Leinster Golf.