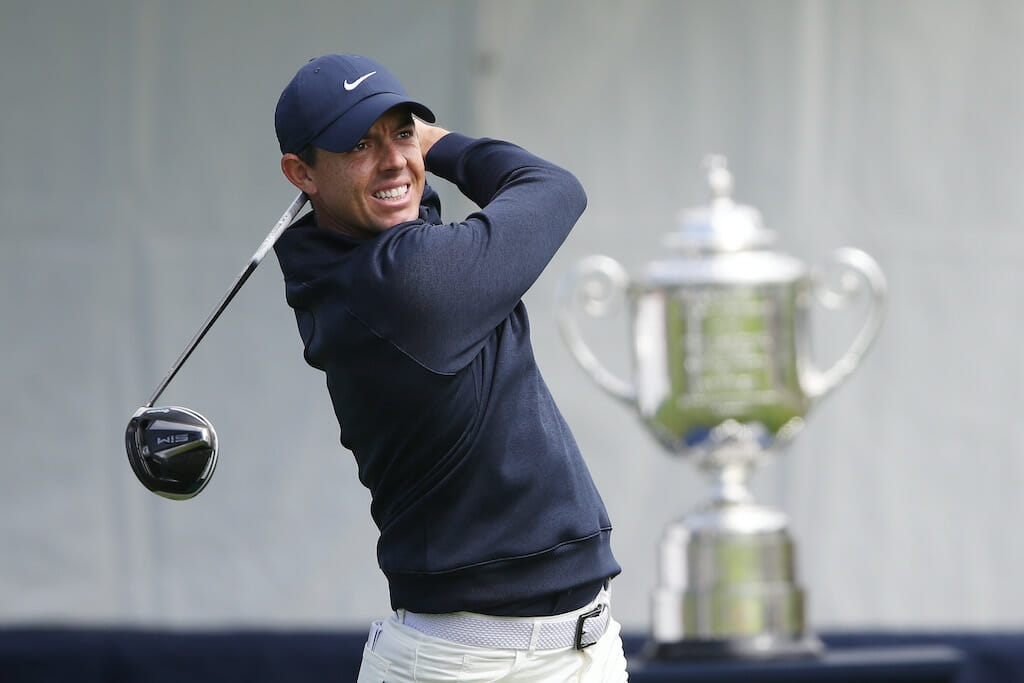 Rory McIlroy and Shane Lowry admit that a confident Brooks Koepka will be hard to stop in his pursuit of three U.S. PGA Championships on the spin.

The defending champ-champ recovered from one-over par through his first three holes to fire a no-thrills four-under par round of 66 to move to within one after an ominous opening effort for the rest of the field at TPC Harding Park.

Defending Open Champion Lowry had front row seats to Koepka’s day one showing and although Lowry was very much focussed on his own play in a comfortable two-under 68, he couldn’t help admire how Koepka went about his business.

‘He’s got a different driver in the bag this week, and you’d know that. He drove it long and straight, and he has that little fade back. He’ll be hard to beat this week, I’d say.”

More and more, it seems on any given Major week at least, Koepka’s name is never too far from contention. The now four-time Major champion adopts a mindset the envy of the entire Tour, almost bragging about his ability to eliminate the majority of the competition before a ball is even hit.

McIlroy was quizzed after his opening even par round of 70 what he thought about Koepka’s seemingly unshakable demeanour when it comes to chasing golf’s biggest titles, and where he would rank a PGA Championship three-peat should the American achieve the feat on Sunday.

“I think when Brooks talks about being relaxed, I think anyone that’s done the preparation and feels like they are in a good spot with their game, you can enter these tournaments relaxed and go out there and play your game and play with freedom,” McIlroy said.

“He’s got his thought process in why he’s relaxed and he says: Well, half the guys can’t win, and then the half that can win, half of them can’t play well; so I only have to beat 30 players.”

Where McIlroy sits in the pile? “We’ll see tomorrow,” he smiled, but the Holywood star remains full of admiration for Koepka’s accomplishments.

“To win two majors in a row, to defend a title is impressive,” he added. “So to win three major championships back-to-back, and the run of golf he’s played in the majors has been incredible.

‘He seems to – as he said – find his comfort zone in these tournaments, in these environments, for whatever reason that is. I think we are all just lucky that he doesn’t find it every other week!”

While McIlroy admitted that he had to tidy up his all-round game to ensure he gets himself into the mix on Friday and amongst those aiming to stop Brooks, Lowry was particularly critical of his own driving display on day one in San Francisco.

“I don’t feel like I drove the ball well at all,” said Lowry.

“I’m going to go to the range and hit a few now, but other than that I feel like my game was good today and I’m pretty happy with my score.

“If I could do everything better tomorrow, it would be great. But yeah, look, I think if I hit more fairways tomorrow because it’s quite gettable from the fairways. The greens were receptive. I’m not sure what it’s going to be like tomorrow afternoon. We could come out here and it could be cold and windy and very difficult.

“So we just have to wait and see what it’s going to be like and take what we’re given and try and make the best of it. But yeah, I definitely need to drive the ball better over the next few days.”