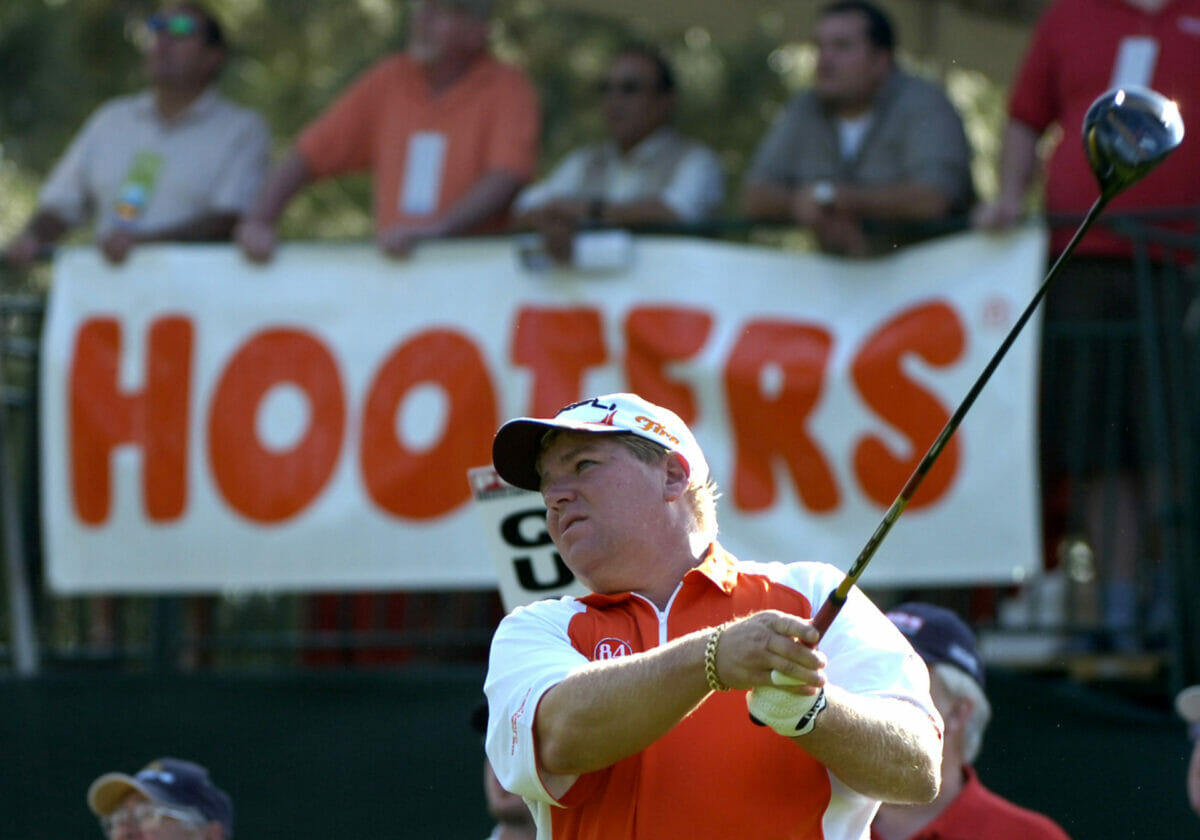 John Daly drives from the ninth tee during the second round of the PODS Championship at Innisbrook Resort and Golf Club in Palm Harbor, Florida on March 9, 2007. Daly later withdrew from the tournament. (Photo by Al Messerschmidt/PGA)

1991 PGA Champion John Daly has withdrawn from this week’s first Major of the year, unwilling to risk his health for another shot at Major glory.

‘Long John’ won the first of his two Major titles when as a PGA Tour rookie, he skated to a three stroke win over Bruce Lietzke at the 1991 staging of this week’s event.

Almost thirty years later, Daly admits he’s been more put out by people questioning his reasons to withdrawal more than the withdrawal itself as he took to Twitter to explain his decision to bypass the year’s first Major:

“People keep asking why I WD from PGA??? California now #1 in cases/deaths, I had knee surgery, I’m a diabetic & I don’t feel comfortable flying,” Daly said.

“Being too close proximity to even small crowds & risk exposure with my health not worth it! God Bless & y’all be safe!”

Perhaps the reason why people have been asking Daly’s reasons is because even now – even without spectators permitted and despite the fact that his best golf is long behind him – a grá still exists for the rebellious American that few other golfers have ever enjoyed.

Daly has always been the people’s champ, relatable to a fault, and he had many!

When he teed up his petrified Titleist on the fourth hole at Druid’s Glen in the ’99 Irish Open, he was overheard delivering the message, “Anywhere in Ireland, little ball”. With Daly, you just never knew.

The swashbuckling American famed for his ‘Grip It and Rip It’ philosophy on golf had endeared himself to the Irish people. His course-record equalling 65 in the final round of the ’94 Irish Open at Mount Juliet was an unforgettable display of power for those fortunate enough to attend.

“That’s the most drives I’ve hit on a course all year”, he gushed of a Nicklaus design which set up perfectly for a man who once proclaimed his course management strategy to be nothing more than, “I just hit it as hard as I can and if I find the ball, I hit it again.”

‘Long John’ was revered just as much for his antics off the course as on it. As a golfer he could send the ball into orbit like no other but it was his velvet touch around the greens that made his breakthrough win at the ’91 PGA Championship possible. From 9th reserve to Major Champion, success came with little warning and Daly easily succumbed to temptation.

A troubled genius, he was fined more money than most professionals wished to earn. An alcohol dependency coupled with a gambling addiction bred stories of legend – the most famous telling of when ‘Wild Thing’ collected a cheque for $750,000 after the WGC in San Francisco, he hopped straight on a flight to Vegas and lost $1.65 million in five hours, including a measly $600,000 in one half hour sitting!

Despite the demons that plagued his talent, and having not recorded a top 10 finish in his previous 26 starts, Daly won his second Major, the ’95 British Open at St Andrews following a playoff with Constantino Rocca. The crowd revelled in it, none more so than a streaker with an arrow pointing to his ‘19th hole’ who momentarily shared the spotlight with Daly.

But such celebrations were proving scarce compared to the public meltdowns. At the 1998 Bay Hill Invitational, Daly, sitting a two under par for the tournament, did his best Rob McAvoy impression, dunking six into the lake before finally clearing the 270 yard carry to cries of ‘Tin Cup’ from the gallery, signing off for an 18 on the hole. Tom Watson, playing with Daly on the day, described it as ‘a comedy and a tragedy all in one’, the story of Daly’s life.

Yet maybe the most telling anecdote of all comes straight from the horses’ mouth. It was after the Pro-am at the 2004 Target World Challenge as Daly and friends enjoyed a couple of beers in the clubhouse bar: “Tiger’s there in his workout clothes and I said, ‘Tiger, come have a beer with us man’.”

But Woods declined, he was on his way to the gym for another session. Not one to take no for an answer, Daly persisted. “I go, ‘man, you don’t need to work out, you need to drink a little bit with us’.” To which Tiger replied, “If I had your talent, I’d be doing the same thing you’re doing.’