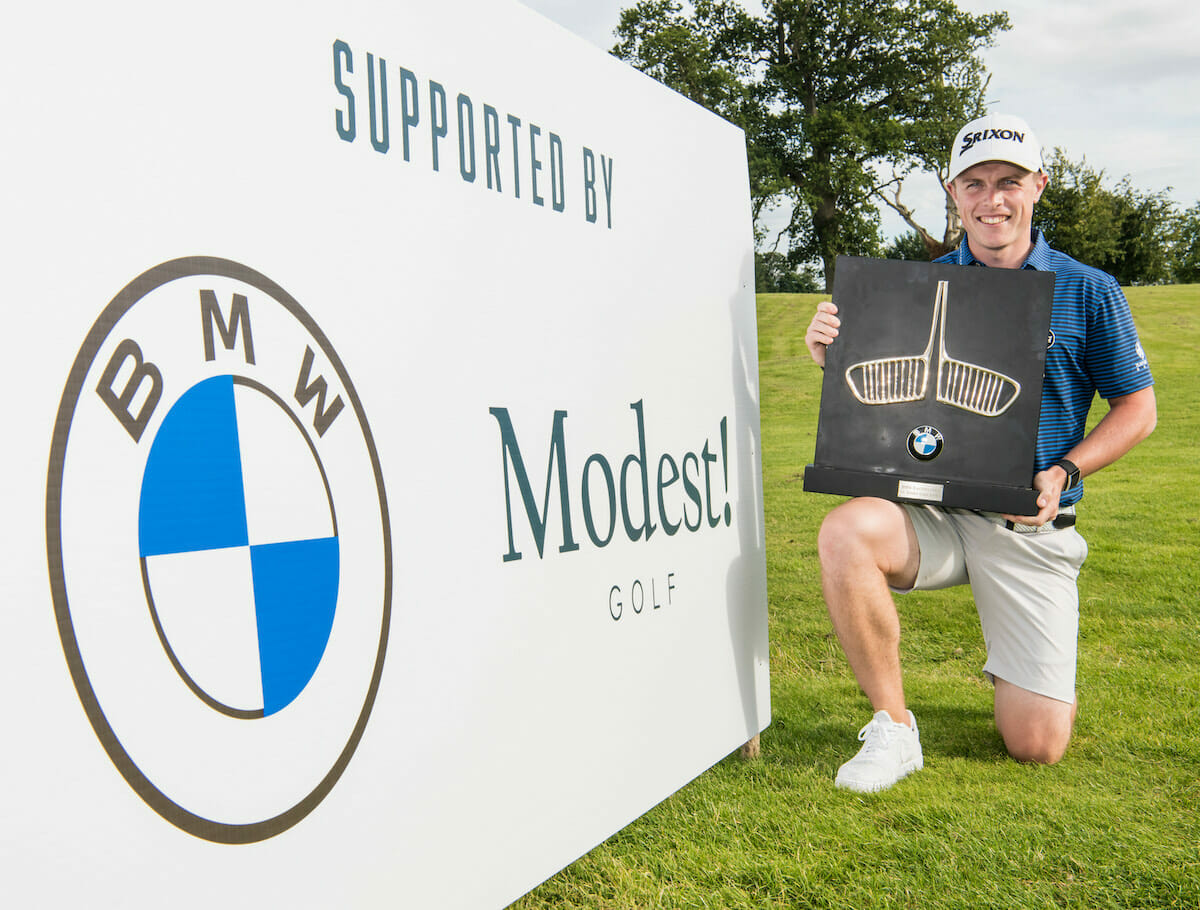 Portmarnock's Conor Purcell celebrates after winning the inaugural Irish Golfer Shootout in association with BMW and Modest! Golf at the K Club. Photo by Mel Maclaine

Portmarnock’s Conor Purcell bested a field bustling with quality to take top honours at the inaugural Irish Golfer Shootout supported by BMW and Modest! Golf at The K Club on Tuesday.

After years of successfully running one of Ireland’s biggest amateur golf series, Irish Golfer Events delivered a true test to some of the country’s finest professionals and a selection of elite amateurs on a sun-soaked day in Kildare.

The Palmer North Course was set-up with the Sunday pin positions from the 2006 Ryder Cup and with a premium on accuracy, Purcell proved the most dialled-in after signing for a five-under par round of 67.

The 23-year old fired six birdies over the course of a near-perfect 18 holes with his one dropped shot at the par-4 fifth nothing more than a blip on an impressive march to victory.

“I’m really happy,” Purcell reflected. “It’s nice when you have a great venue like the K Club to play at. Everyone you talk to will say that it’s the best conditioned course they’ve played all year and the weather was obviously perfect too.

“I played some nice stuff. Since coming out of lockdown it’s been a case of all duck or no dinner for me. I’ve had plenty of birdies most rounds but a couple of errant shots that cost me along the way but I knew the good golf was there and thankfully it came out today.” Portmarnock’s Conor Purcell celebrates after winning the inaugural Irish Golfer Shootout in association with BMW and Modest! Golf at the K Club. Photo by Mel Maclaine

With a sizeable prize pot of €10,000 up for grabs on the day, Purcell took home the €2,500 winner’s cheque but it was the opportunity to showcase his game after limited opportunities so far this year that most pleased Purcell.

“We’re very grateful because none of us really have a job at the minute,” he added.

“After such a long period without competitive golf, it’s a huge bonus to be able to come out today against such a strong field. We owe a lot of thanks to Irish Golfer, BMW, Modest! and the K Club for putting their support behind the event.

“When you get a field of 80 players with the depth of quality of this one on a great golf course like the Palmer, it can only help your game.”

There was no shortage of competition with the likes of LPGA Tour star Leona Maguire, Challenge Tour players Gary Hurley and Ruaidhri McGee and Alps Tour regulars Conor O’Rourke and David Carey all lining out to play.

However, in the battle for the podium places, Castlewarden’s Lauren Walsh and Royal County Down and Tandragee star, Olivia Mehaffey were inseparable in tied second spot after the pair returned superb four-under par rounds of 68.

No stranger to the K Club, the Kildare native Walsh, who fired a stunning 65 at the Irish Scratch Series at Seapoint on Monday, continued her rich vein of form on home soil ahead of her return to college life at Wake Forest in the autumn.

“I’ve been hitting the ball really well,” Walsh said. “I was looking forward to today. The golf course is spectacular and the greens roll really well. I was bogey-free for my round which is always nice. 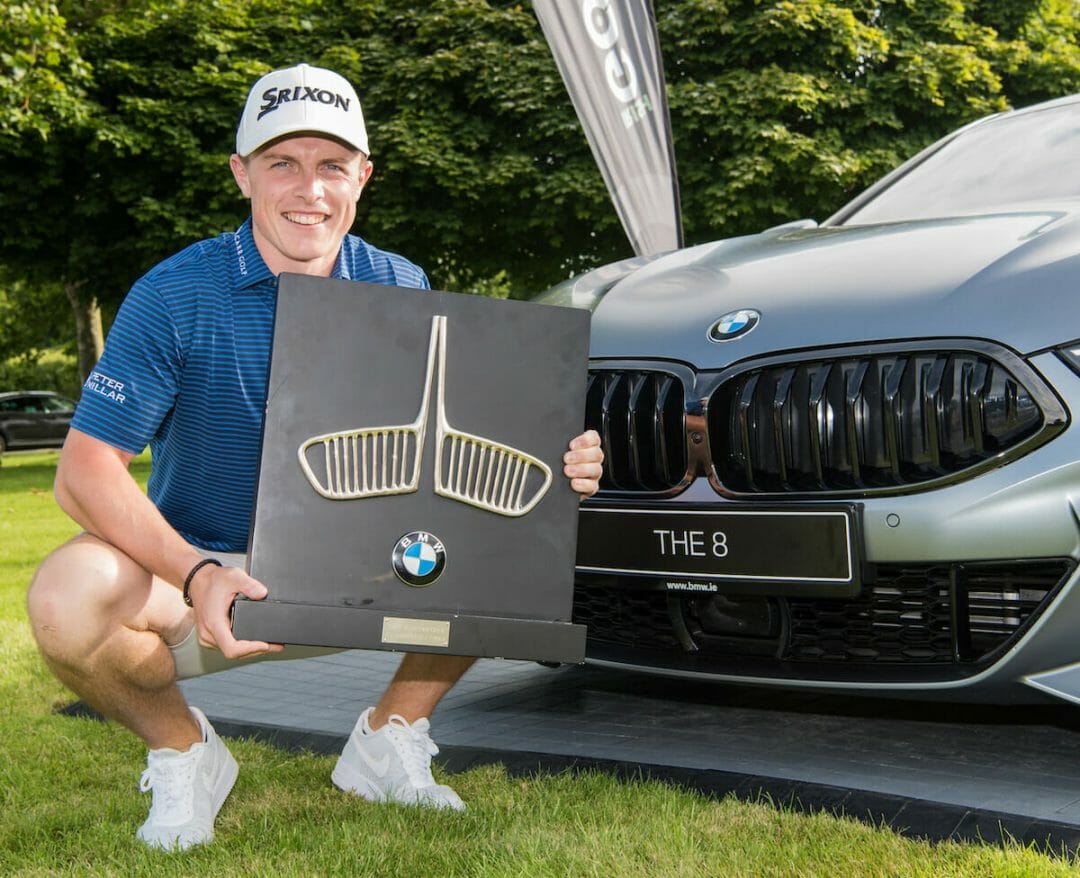 Portmarnock’s Conor Purcell celebrates after winning the inaugural Irish Golfer Shootout in association with BMW and Modest! Golf at the K Club. Photo by Mel Maclaine

“I hit a lot of fairways and a lot of greens and putted nicely too so it was a good combination. It’s so nice to be back competing and playing with the likes of Leona and Olivia can only help you improve.”

The Irish Golfer Shootout supported by BMW and Modest! Golf was the first of its kind to be staged in Ireland offering competitive action to our home-based professionals and high-performance amateur golfers who have seen their playing schedules decimated by Covid-19.

“We were delighted to provide some of our leading players with a platform to shine,” said Peter Finnan, Director at Irish Golfer.

“It’s been a tough year for everybody and playing opportunities are more scarce than ever so to be able to help deliver some competitive action to these players as they get into their season was really important to us.

“There was some great golf on show, made possible by the team at the K Club who ensured the course was in really super shape. It was a tough set-up but hopefully the players appreciated the test and we wish every one of them every bit of success as they belatedly get into the meat of their season.

“We’d also like to thank the team at Modest! Golf, BMW Ireland, Kinetica Sports and everyone at the K Club for their support in hosting this event.”

“We were delighted to be able to support the day. It was a fantastic opportunity and to have Modest! Golf and the K Club alongside us was superb. To be able to provide playing opportunities to the elite amateurs and professionals from across a variety of tours was extremely important to us.

“It’s great to be associated with events like these. BMW are a huge sponsor of golf worldwide. We support some of the biggest events around the globe but to be able to bring a little bit of that back into Irish golf is particularly pleasing.”

Tom McKibbin, Brendan McCarroll and Peter O’Keeffe shared fourth place after returning two-under par 70s while Mark Power, Tim Rice and Dermot McElroy completed the list of those to break par at minus-one in a tie for seventh.

Bushnell Golf kindly sponsored the nearest the pin prize offering 2 Bushnell Pro XE rangefinders for nearest the pin on the 12th hole on the Ryder Cup course. The winners were Mark Power who hit his shot in to 48cm to claim the men’s prize and Rachel Thompson claimed the ladies prize with a distance of 167cm.