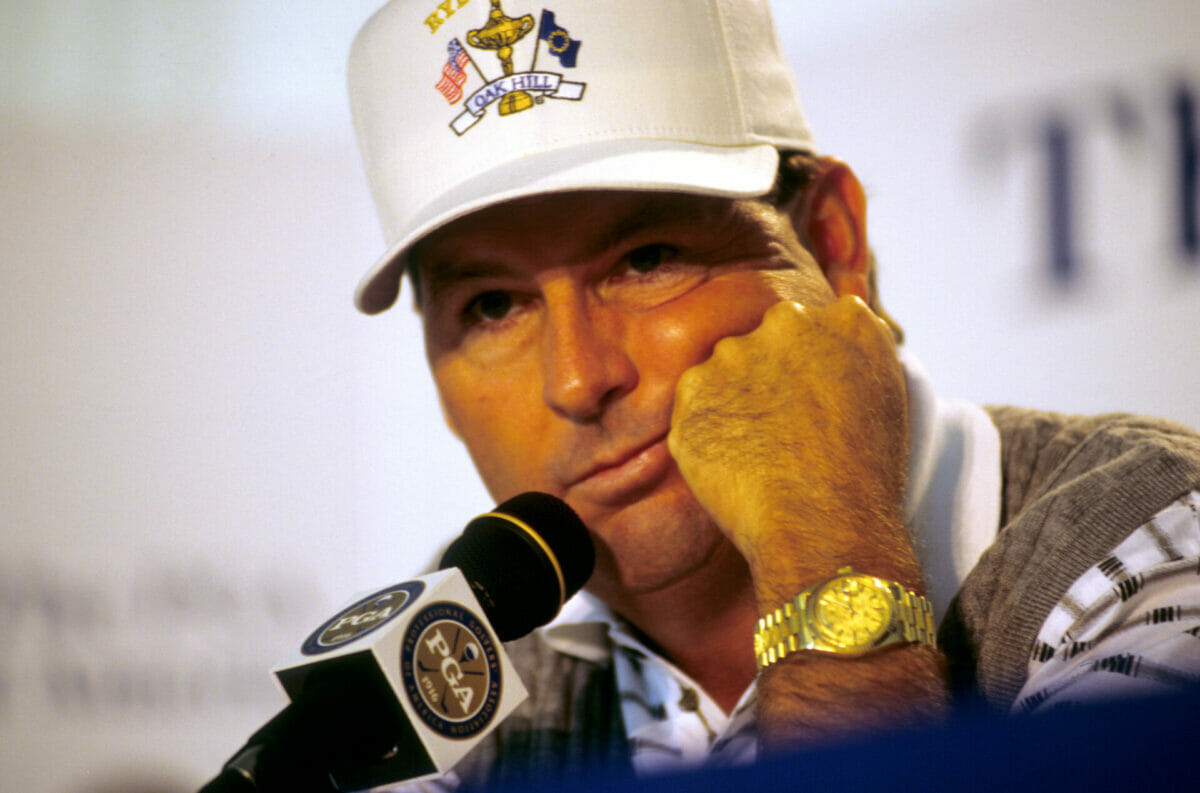 Captain Lanny Wadkins during the 31st Ryder Cup held at the Oak Hill Country Club in Rochester, New York. September 22-24, 1995. (photograph by The PGA of America). (Photo by Montana Pritchard/PGA of America via Getty Images)

Lanny Wadkins’ major title haul may pale in comparison to contemporaries such as Jack Nicklaus, Tom Watson and Lee Trevino, but for more than 20 years he was among the United States’ elite and there were few better when it came to the pressure cooker of the Ryder Cup.

Born in Richmond, Virginia in 1949, Jerry Lanston Wadkins came from a golfing family, and though younger brother Tommy would also make it to the PGA Tour, Lanny – as he preferred to be known – was the undoubted star. Revered as one of the fastest players of his generation – which would make him lightning quick by today’s standards – Wadkins won the 1970 US Amateur as a 20-year-old Wake Forest student and joined the professional ranks the following year.

21 PGA Tour victories – including the 1977 PGA Championship – and wins in Japan, Austria, Colombia and Australia over a career spanning thirty years suggests that Wadkins was a consistent if not an overly prolific winner, but his game was stylised by grit and determination which resulted in an additional 17 top-10 finishes at major championships.

Grit and determination are also vital ingredients in the Ryder Cup and no American better espoused this than the man himself. To date, only Jim Furyk and Phil Mickelson have more US Ryder Cup appearances than Wadkins – and it must be remembered that neither Mickelson nor Furyk had to serve a five-year apprenticeship on tour prior to being eligible, unlike Wadkins and his contemporaries in the seventies and eighties – only Billy Capser and Mickelson have played more matches, and only Casper and Arnold Palmer have won more points.

Wadkins’ Ryder Cup debut would be the final time that a British and Irish side would compete for the trophy, with the continental Europeans addition coming in ’79. Though a rookie in ’77, Wadkins’ match play pedigree shone through in compiling a perfect record of three wins (there were only three rounds of matches in the ’77 event) without ever seeing the 18th tee box.

By ’79, only Hale Irwin and Lee Trevino had more Cup experience than Wadkins as a US side featuring eight rookies took on new look opposition at The Greenbrier in West Virginia. Though there was considerable experience on the European side, it was the debutant Seve Ballesteros that all the Americans wanted to beat. Seve was the reigning Open champion and already a global superstar.

With the format once again changed to mirror the current setup, US Captain Billy Casper anticipated Ballesteros to lead the charge and sent Wadkins and rookie Larry Nelson out first in the opening four ball matches. And he was right. Seve, along with fellow Spaniard Antonio Garrido lined up opposite and an inevitable dogfight ensued.

Though Seve’s gamesmanship would become something of legend, nobody was better equipped to handle it than Wadkins. Knowing Wadkins was an extremely fast player, Ballesteros and Garrido deliberately slowed the pace in efforts to upset Wadkins rhythm and though fuming inside, Wadkins’ impasse exterior told a different story.

Three times Ballesteros and Garrido would be drawn against Wadkins and Nelson in 1979 and the Americans got the upper hand on all three occasions. The 5&4 drubbing in the final paired session the result of growing frustration on the European’s behalf. The only blotch on Wadkin’s week was a singles loss to Bernard Gallacher which derailed Lanny’s quest for consecutive perfect scoring records at Ryder Cups.

In the days prior to the US affording captain’s picks, a dip in form meant that Wadkins wasn’t part of the US line-up at Walton Heath in ’81, but he made no such mistakes in ’83, topping the US qualification ladder for the Jack Nicklaus led event at PGA National, Florida. And it was here that Wadkins’ single greatest Ryder Cup moment came.

The Americans had never failed to win on US soil but as the shadows began to stretch across West Palm Beach on Sunday, the threat of a first home failure was very real. Perhaps sensing that it would go the wire, Nicklaus had back loaded the American side with Wadkins, Raymond Floyd and Tom Watson the final three. With Watson cruising, and Floyd being crushed, the destiny of the Ryder Cup lay in the hands of Lanny Wadkins and Jose Manuel Canizares.

Canizares had led by three at one stage but the scrapper in Wadkins had seen him claw the defecit to just one playing the final hole. The arithmetic was simple; barring seismic collapses in the two matches behind, Wadkins needed to win the hole to win the cup. The final hole at PGA National is a monstrous par-five and was very much a three shot hole in those days. Both Wadkins and Canizares had positioned themselves well and had wedge in hand for their third shots. By now, almost the entire gallery were entrenched along the fairway ropes and surrounding the green.

Canizares, up first, blinked first. An understandably nervy wedge landed short but dry in the greenside rough. Wadkins had had his shoulder to the door for much of the back nine, and when it opened an inch, he barged right through. He clipped a low, skipping wedge that hopped twice and then dug its heels, coming to rest 18 inches from the hole. Canizares was unable to convert his chip and a relieved Nicklaus kissed the turf from where Wadkins’ final approach had been played. Jack’s blushes had been spared and Wadkins would later call it the most important shot of his life.

The Belfry will live long in lore as the site of Europe’s first ever victory, and would host the event four times between 1985 and 2002. The European victory, spearheaded by a continental spine that included four Spaniards and a German, heralded the dawn of a new age for the Ryder Cup. It wasn’t all change, however. In the Saturday morning four-ball, Wadkins and Mark O’Meara faced Ballesteros and Manuel Piñero and the mind games began on the first green.

Wadkins had a lengthy putt to win the hole and asked Seve to move his coin from Wadkins’ line. By Lanny’s own admission he hit a horrible putt, the ball ricocheted off Seve’s coin and found the bottom of the cup. Ballesteros was furious and ridiculously accused Wadkins of deliberately aiming for Seve’s coin.

Wadkins extended his record to 4-and-0 against Seve, but Ballesteros got his hands on the Ryder Cup for the first time. Unfortunately for everybody, this would be the last time Wadkins and Ballesteros would directly square off in Samuel Ryder’s name.

Wadkins would appear four more times as a player before taking the reins at Oak Hill in 1995 where Nick Faldo’s sensational late turnaround stole the cup back for the Europeans in the most dramatic of fashions. The intervening championships saw Europe defend in ’87, a tie in ’89, before America reclaimed and then successfully defended in 1993 with the widest margin of victory being two points.

The Ryder Cup is the most eagerly anticipated event in golf today and that is thanks in no small measure to the men who fought tooth and nail throughout the ‘80s and ‘90s. Lanny Wadkins record of 20 wins, 11 losses and three ties came during a period that Europeans were coming to dominate the world stage. His can boast five victories and a tie among his eight appearances and is the only American to have outplayed and outwitted Seve Ballesteros every time they squared off.

He encompassed the passion, the aggression, and the steely nerve that legends are made of. It takes a special kind of player to produce his very best under the most intense pressure imaginable.

Lanny Wadkins, we salute you. A true legend of the Ryder Cup.