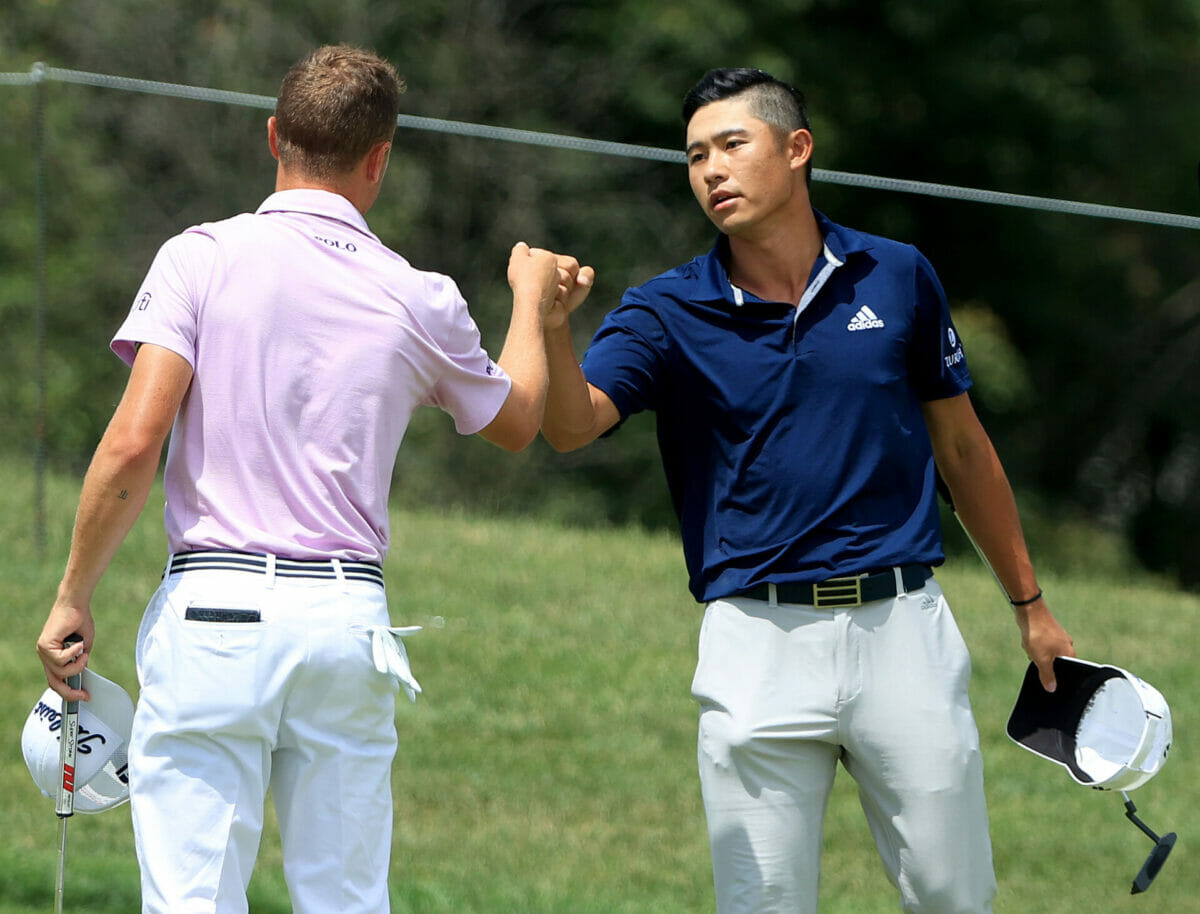 Collin Morikawa is congratulated by Justin Thomas after Morikawa defeated Thomas in a playoff in Ohio. (Photo by Sam Greenwood/Getty Images)

Justin Thomas could not hold back his emotions declaring ‘I’m p*ssed off’ after bogeying two of his closing three holes before losing out in a three-hole play-off to rising PGA Tour superstar Collin Morikawa at the Workday Charity Open in Dublin, Ohio.

Morikawa, 23, brilliantly collected a second PGA Tour first in posting a closing round 66 to end tied in regulation play with Thomas (72) at 19-under par before winning with a par at the third extra hole.

The No.5 world ranked Thomas went into the last day well in command and leading by two shots but after an indifferent start ‘JT’ found himself three shots behind through seven holes before regrouping to be three in front with three to play.

Morikawa and Thomas headed into the play-off and twice back to the 18th hole, where on the first occasion Thomas drained a monster 50-footer for birdie leaving his rival to sink a clutch 25-footer to keep the tie going.

They each made par at the 18th for a second time around in the play-off before Thomas’ tee shot at the 10th hole, the third extra hole, landed behind a small tree from where he ended-up taking a bogey ‘5’.

Morikawa then had two putts from nine-feet to claim the victory.

The win for Morikawa makes amends also in losing out in a play-off against Daniel Berger for the Charles Schwab Challenge, the opening event in a return to golf following the Covid-19 lockdown.

And Morikawa will move to a career high of No. 13 in the world.

“I’m excited and I am super happy I closed it out after losing in a play-off at Fort Worth,” said Morikawa.

“In that first play-off I thought ‘Oh, my God!’ I have to make the putt I had make or I would be going home empty-handed again but as the play-off progressed I just felt a little more comfortable.

“So, to finally pick-up my second Tour victory is great and hats off to Justin, as he was one of the first people that helped me when I turned pro last year in Canada, so I owe a lot to him but I am just so happy I managed to close out the win.”

Thomas was seeking a second Tour victory this year in capturing the 2020 opener in Hawaii and he didn’t hold back on his emotions in virtually handing the win to Morikawa.

“I had a three shot lead with three to go and just completely handed it over to Collin. He played great in birding a very tough hole on 17 and we each made great birdies at the first play-off hole, so I had a few chances to win this thing in regulation and in the play-off.

“The thing is I made four bogeys on a very easy day like today and managed to lose in a play-off.

“The thing that sucks about golf, it hurts but the great thing is I have another chance this week.”

Graeme McDowell ended his tournament with a 72nd hole birdie in a closing round 72 and dropped six spots on the day to finish in a share of 35th place at five-under par, one fewer than Shane Lowry.

Lowry also birdied his last, though it was the ninth hole on the scorecard, in his score of 69 for a four-under par total and a share of 39th place.