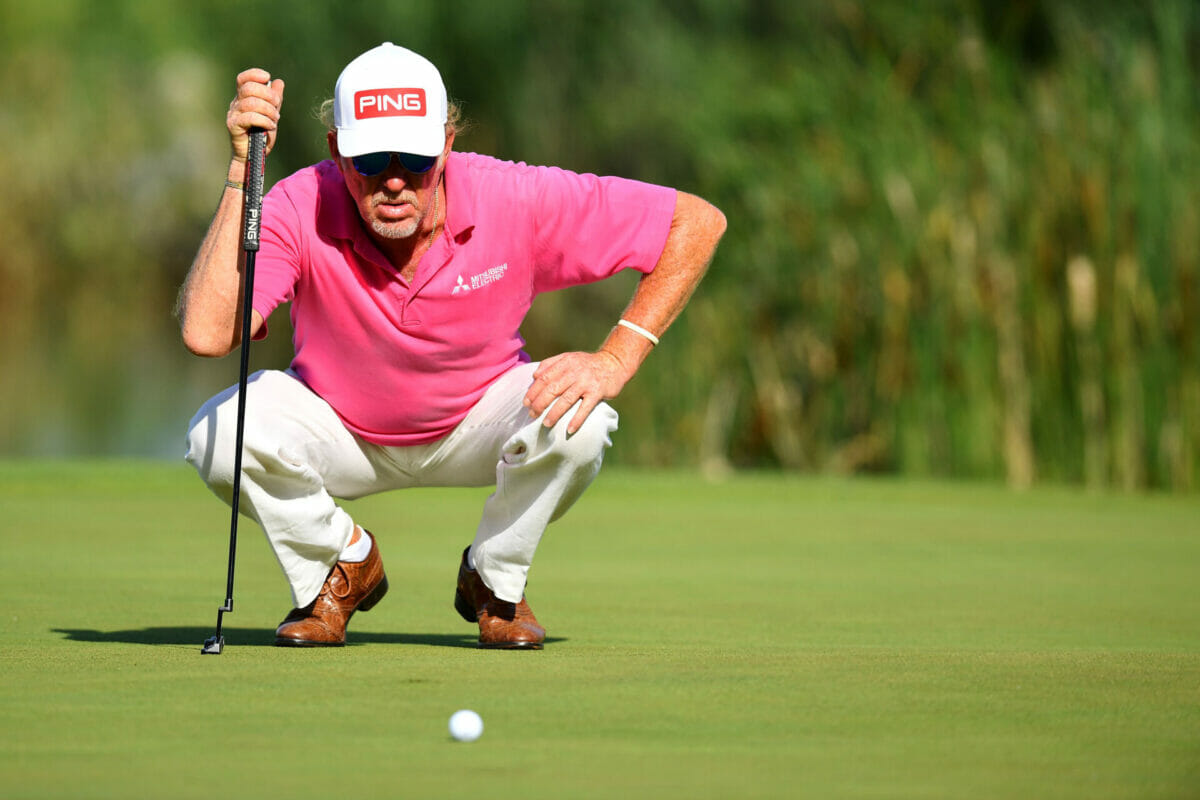 Gavin Moynihan birdied two of his closing three holes to scrape the cut-mark on the number at the halfway point of the Austrian Open.

The Dubliner slumped to four-over par through 10 holes of his round mainly because of a puncturing triple-bogey 7 as he started his inward half, but a rousing finish saw Moynihan return a two-over par 74 to make the moving day field.

“Looks like we have a weekend tee time,” Moynihan reflected late in the day Friday. “Gave it no hope when I finished. Let’s see what the weekend brings!”

Moynihan had a rock-solid three-under par opener to thank for seeing him through to the weekend, however, it’s a cigar-puffing, salsa loving Spaniard, Miguel Angel Jiménez who’s defying his lofty years once more to hold a two-stroke lead at the halfway stage at Diamond Country Club.

Jimenez is bidding to break his own record as the oldest winner on the European Tour for the third time, after recording his lowest European Tour round in two years on Friday.

The evergreen Spaniard broke Des Smyth’s 11-year-old record when he captured the 2012 UBS Hong Kong Open title aged 48 years, 307 days. He then defended his title the following year at the age of 49 years, 337 days, and broke his record for the second time at the 2014 Open de España at the age of 50 years and 133 days. Jiménez will be 56 years and 189 days old on Sunday.

Jiménez is in the hunt for another record as he makes his 705th European Tour start this week – moving just one behind Sam Torrance’s all-time appearance record of 706 set ten years ago at the Johnnie Walker Championship at Gleneagles.

“I’m playing very well,” said Jimenez. “It feels great. After four months without competing, it’s nice getting back into a tournament and feeling the tension again. I’m hitting it well and making some putts, not too many bogeys – that’s the key. I enjoyed myself. My irons were working very well.

“Of course I prefer playing golf when it’s warmer, especially when you get to an age – the bones and the joints – it’s harder to move, but much nicer in the heat. Nice weather and a beautiful golf course. But tomorrow we might have some water.

“I was excited to get back. I miss the competition. I can’t remember the last time I had four months holidays. Coming here from the Dominican Republic and getting started here, it’s a golf course I like very much.”

Jiménez started the day at Diamond Country Club strongly with three birdies in his first four holes. He then responded to a bogey on the fifth with three more gains before the turn, including one on the eighth, a hole which he helped redesign in 2010.

It was a similar story after the turn, as he started the back nine with three birdies on the first four holes and recovered from consecutive bogeys with his tenth birdie of the day on the 18th to sign for a seven under par round of 65 and an 11 under par total.

He is two strokes ahead of Scotsmen Craig Howie and Marc Warren, 2013 Austrian Open champion Joost Luiten, Italian Renato Paratore and Nicolai von Dellingshausen of Germany on nine under par, while Holland’s Darius van Driel is one shot further back on eight under.

Meanwhile, both Niall Kearney and Robin Dawson enjoyed much better days but the pair were left to rue their slow starts on Thursday.

Dawson added an encouraging two-under par round of 70 to his opening 76 to miss the cut by three on two-over while Kearney was a shot further back after firing a three-under par 69 to give himself something to work on as the season resumes on the continent.