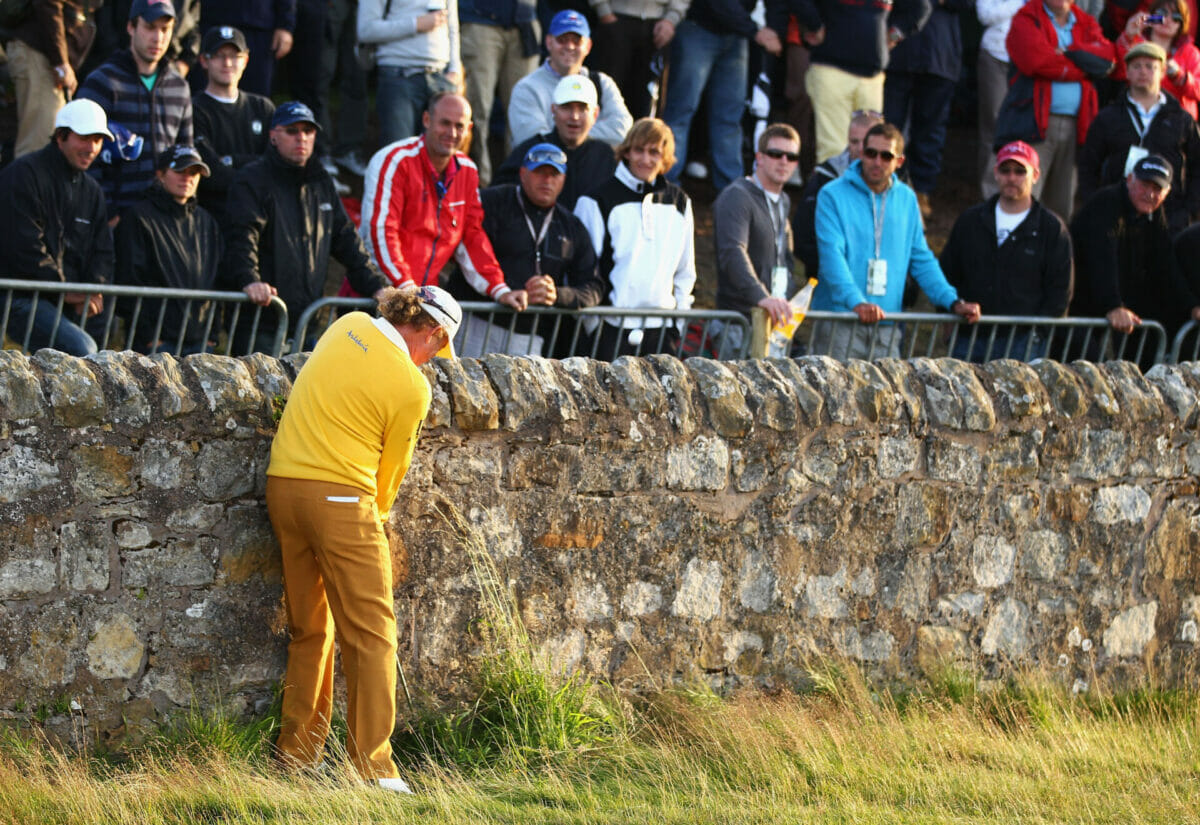 Miguel Angel Jimenez hits his fourth shot on the 17th hole during the third round of the 139th Open Championship on the Old Course, St Andrews (Photo by Richard Heathcote/Getty Images)

We started with some magic from the Big Easy, Ernie Els at Muirfield in 2002 and moved on to some Tiger Woods gold from Royal Liverpool in 2006. At number eight, we had Gene Sarazen sign off on his Open career with an unforgettable hole-in one while ‘The Duel in the Sun’ sits proudly at number 7. At number 6, we had a much more recent affair in Jordan Spieth’s ventures down the right of 13 en route to victory at Royal Birkdale in 2017 while here at number five we have a two-part thriller.

Two Open Championships, 15-years-apart, but twin, almost identical incidents on one of world golf’s most iconic and intimidating holes, the infamous 1th at St Andrews, the Road Hole.

Back in 1995, Australian Greg Norman, already a two-time Open Championship found himself in trouble, tight up against the retaining wall running the length of the 17th green, stymied, his ball so close to the stonework, no room for a backswing, time for Plan B.

Which was to get creative and the Great White Shark did just that, deciding to hit his ball 180º away from the green, onto the adjacent wall, rebounding into the heart of the vast green, before holing an audacious 20ft putt to save his par.

Fast forward 15 years, and history was about to repeat itself back at the Home of Golf; same place, the 17th Road Hole at St Andrews, same tournament, the Open Championship, same predicament, a golf ball too tight to the out-of-bounds wall to permit a backswing.

This time the escape artist extraordinaire was another flamboyant golfer – coincidentally, like the ‘Great White Shark’ 15-years-earlier, also dressed in yellow – Spanish ace Miguel Ángel Jiménez, who followed Norman’s route out of trouble, playing his ball into the wall before rebounding onto the safety of the green.

The only material difference was that, unlike the Australian, the Spaniard, faced with a putt of similar length, could not hole out, a bogey five on his card despite his imaginative, if risky response.