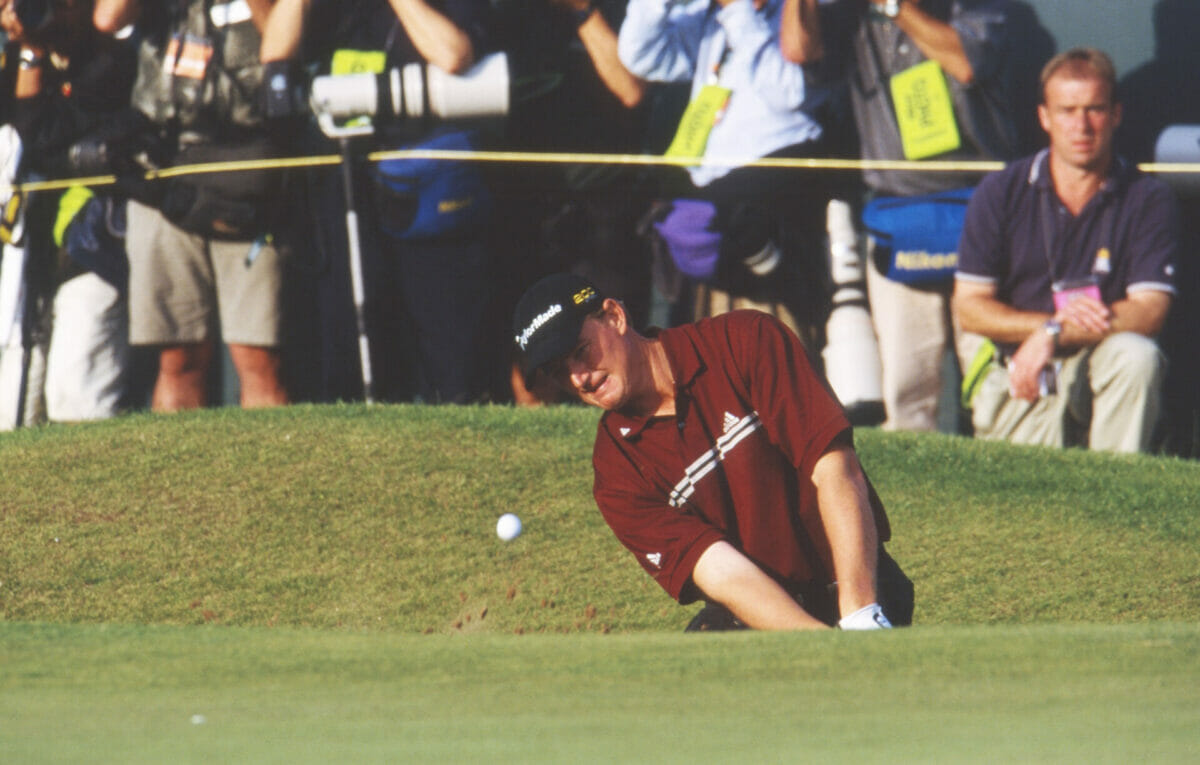 So here’s a highly-subjective selection of Greatest Hits to remember and some Misses to forget – in the absence of real, live Open golf. We’ll start from number 10 and upload each hit daily until we get to number one. Let us know what you think.

Many an Open Championship has been won and others lost amongst the profusion of deep and often impenetrable bunkers littering the 10 venues currently on the R&A roster, and so it was at Muirfield in 2002 when, if not winning the Claret Jug for South African Ernie Els, a delicious and delicate sand wedge from such a trap lurking beside the 13th green on the final day’s play got the ‘Big Easy’ into a four-man play-off from which he was to emerge victorious to earn a first

With Tiger Woods chasing the Grand Slam, the undisputed world #1’s bid came to an excruciating, grinding halt on day three of the 131st Open, courtesy of the worst round of his career, an improbable 81, 10-over-par, chiselled out in atrocious conditions comprising a cold wind and driving rain.

Champion-elect Els had limited the damage with a fine Saturday 72 considering the conditions, to lead by two going into the final day, but he did not have it all his own way, eventually signing for a lack-lustre 70, compared to a 66 by Frenchman Thomas Levet and Australian Steve Elkington, whose compatriot Stuart Appleby registering the round of the day, a 65, to earn himself a play-off place.

But the prospect of Els participating in extra holes had been put in jeopardy when he leaked another sloppy approach to the 13th green, dumping his ball in a greenside bunker; tight against a steep, revetted face, the South African had to use all his skill and craft just to get the ball up and out, which he did to stunning effect, kicking softly off a grassy ridge, feeding down towards the green and stopping all-but stone dead, 18-inches from the hole, that deft sand wedge and a tap-in putt had saved his championship.

In the four-hole play-off, Levet and Elkington went off first, followed by Els and Appleby; both Australians were eliminated after four holes, Els and Frenchman Levet, having tied on level-par then went head-to-head, sudden death.

The South African saved par thanks to another magical shot from a greenside bunker, Levet bogeyed, the Claret Jug was in the South African’s hands for the first time, a feat he was remarkably to repeat a decade on at Royal Lytham, the beneficiary of Adam Scott’s belated and painful implosion.