Monahan insists the show can go on despite Covid cases 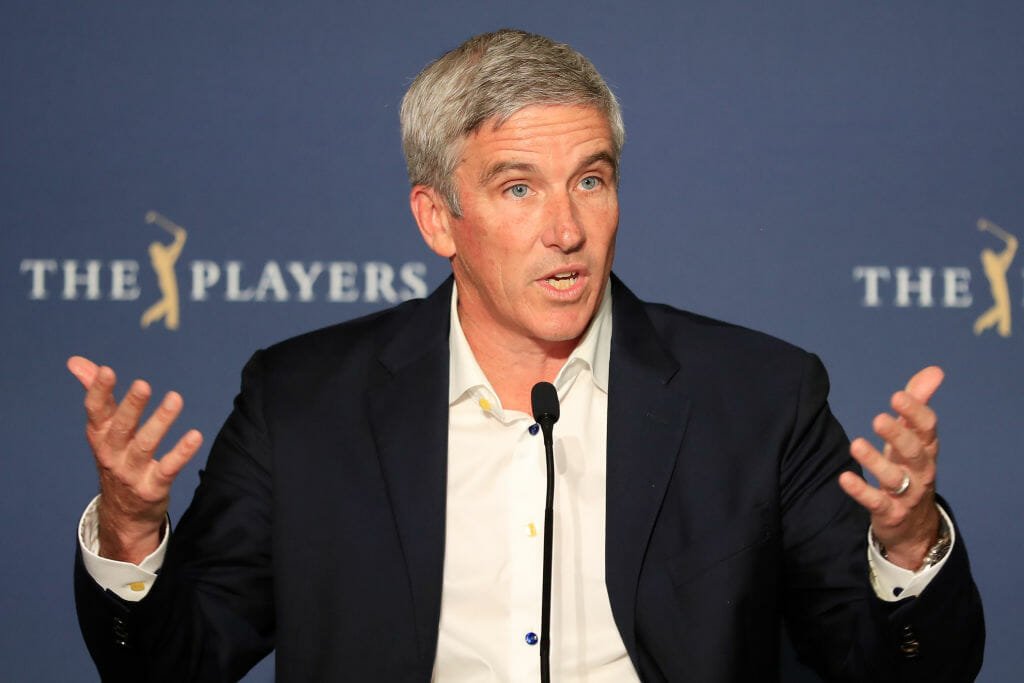 The PGA Tour is adamant it will push ahead despite four-time Major winning Brooks Koepka joining Irishman Graeme McDowell in withdrawing from competition due to their respective caddies testing positive for Covid-19.

First it was Nick Watney testing positive ahead of last week’s second round of the RBC Heritage and then earlier this week Cameron Champ was also confirmed as having Coronavirus symptoms.

Now Koepka’s withdrawn from the Euro 6.6m event after his long-time Irish-born caddy, Ricky Elliott was also confirmed as testing positive for the virus while Koepka’s younger brother, Chase has also withdrawn but purely out of precaution.

PGA Tour Commissioner, Jay Monahan addressed the media on the eve of the event, declaring the Tour will go ahead with this week’s event that has the approval of the Democratic Connecticut Governor Ned Lamont.

“We have been working since March on a ‘health and safety’ plan that would be considered best practice among professional sports leagues,” said Monahan in revealing the Tour has conducted 2,757 tests over the past two weeks.

“We have tried to avoid as much risk as possible but then we know it would be impossible to eliminate all risks as evident by the three positive tests this week.

“It is a low number, and it is a low number of withdrawals on a percentage basis but every number hurts and as we look at where we are now three events, and on the eve of the first round of the Travelers Championship, we all need to remind ourselves we are all learning to live with this virus, and we all need to learn to live with this virus both as individuals, as family members and within our businesses.

“It is also pretty clear this virus is not going away and it is why we are just going to continue to refine our testing processes but I feel good about our level of medical support and procedures going forward.

“There are these kind of scenarios that will play out and if we do have positive cases we will deal with as we are shown to be doing now and will continue to do.”

The World No. 4 ranked Koepka also is seemingly far from happy that Elliott left the ‘bubble’ to join McDowell, Koepka’s coach Claude Harmon III and Comboy to attend a memorial service on Monday (June 15th) following the Texas event.

“I’ve told everybody on my team they’re pretty much on lockdown,” Koepka said.

“If they don’t want to do that, then they don’t have to be with us. It’s pretty simple. I told Claude, I’ve got my chef that’s traveling with me, and I brought basically my own gym — I brought free weights, bands. Everything you see in a gym, we’ve brought.

“There’s no reason that anybody should leave the house. The chef obviously leaves the house to go get food, but that’s about it. But she’s still using the best face mask, everything she can when she gets back, washing her hands, doing all these things, and just trying to limit our exposure.”

McDowell and Comboy had shared a hotel room in Texas and also in Hilton Head but after McDowell missed the cut, Comboy chose then not to travel direct to Connecticut so he drove back to Orlando to take another test which proved to be positive just prior to his intended flight to Hartford in Connecticut.

McDowell indicated he was feeling a little fatigued at the end of last week, which he wrote off to having not competed in a tournament for three months and then playing two straight weeks.

“I had been feeling a little off colour, but not with alarm bells ringing until Kenny failed,” he said.

After finding a stand-in caddy, McDowell played a practice round Tuesday on the host TPC River Highlands course with fellow Irishman Shane Lowry and Koepka.

“The problem is, people are out here passing tests when they could still have the virus,” said McDowell.

“That’s what we’re learning. Ricky passed a test on Monday and he failed the next morning.”

McDowell said he would take two weeks off and hoped to return in July for the first of two weeks in Ohio. But that depends on if the PGA Tour is still going on.

“Do we shut down, start up in a month’s time, two months’ time? You come back and what’s changed,” McDowell said. “I think the tour is doing a pretty good job. It’s just so difficult to control everybody outside the gates.

“We have to get through to the other side of this.”

World No. 1 Rory McIlroy will play the opening two rounds of the Travelers in the company of Phil Mickelson and Bryson DeChambeau.

And McIlroy will be looking to restore some lost pride after DeChambeau easily out-played him on the final day of last fortnight’s Tour stop in Ft. Worth.

The bulked-up American shot a final day 66 to miss out by a shot in forcing his way into a play-off while McIlroy struggled with a 72 to finish T32nd.

Joining McIlroy will be Shane Lowry looking firstly just to play all four rounds after missing the cut in the two post lockdown events.

McIlroy and Lowry are out on both day one and two in back-to-back groupings.