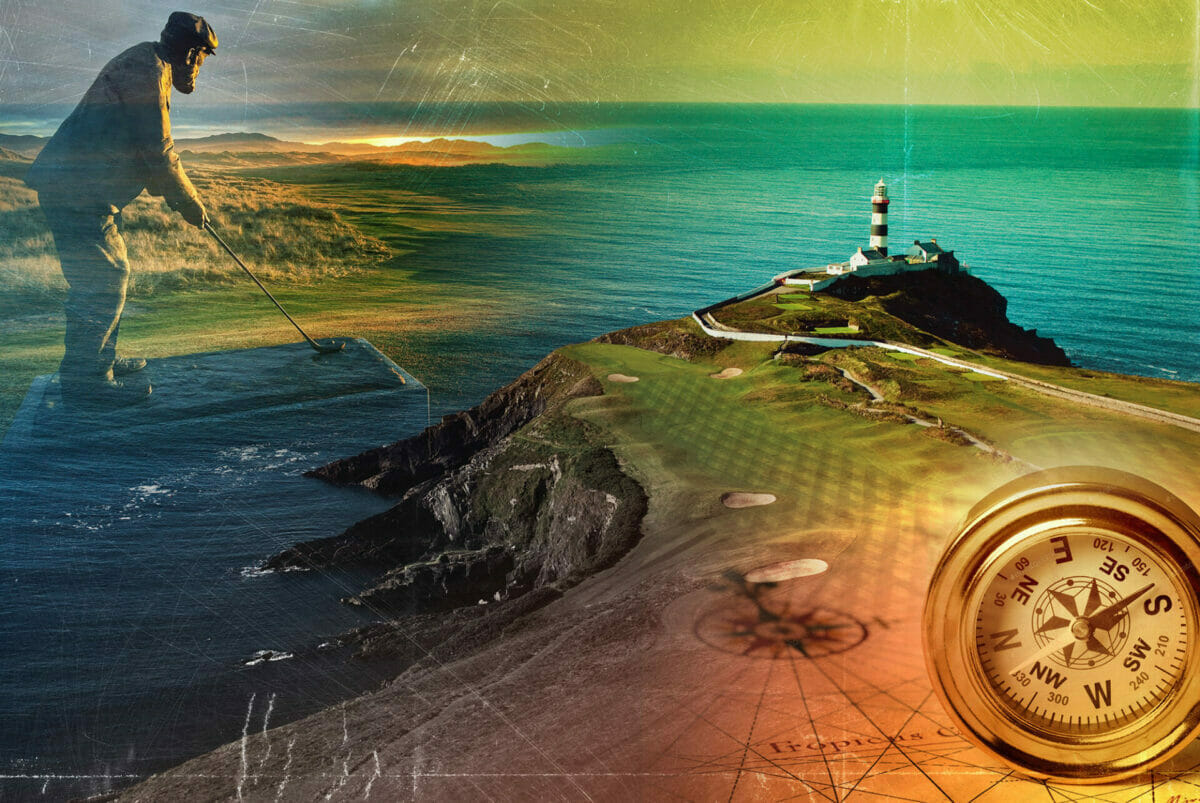 A few weeks ago, I wrote a list for Irish Golfer on the 10 most scenic golf courses in Ireland. It caused some debate as we all have strong opinions as to what comprises the ‘best scenery’. Do 360 degree vistas of mountains trump coastline views from the cliff tops?

This article, however, looks at something else. Iconic sights are those elements that give a round something extra special. It may be on the course or just off it but it is something that catches your attention and lasts long in the memory.

Payne Stewart visited Waterville twice before the Open Championships of 1998 and 1999. And two visits were all it took for him to become an adopted son of the Waterville community. That was just the way he liked it: he was down to earth. During his second visit he played harmonica, sang songs and served behind the bar in the Butler Arms Hotel. He could have been Irish the way he carried on… and he mused whether it would be possible to become mayor of this charming Irish village. No such vacancy existed but there was always the captaincy of the golf club. And that’s how Payne became the honorary captain of Waterville Golf Links for 2000. He never got to enjoy the honour as the tragic plane accident of October 1999 took him at the age of 42.

His statue was unveiled in July 2000, at a special ceremony to honour the three-time major winner. It was designed by Irish sculptor Jim Connolly, and sees Payne in his famous plus fours and flat cap. Today, it is a focal point for visitors and a touching memorial to one of the world’s most popular golfers. 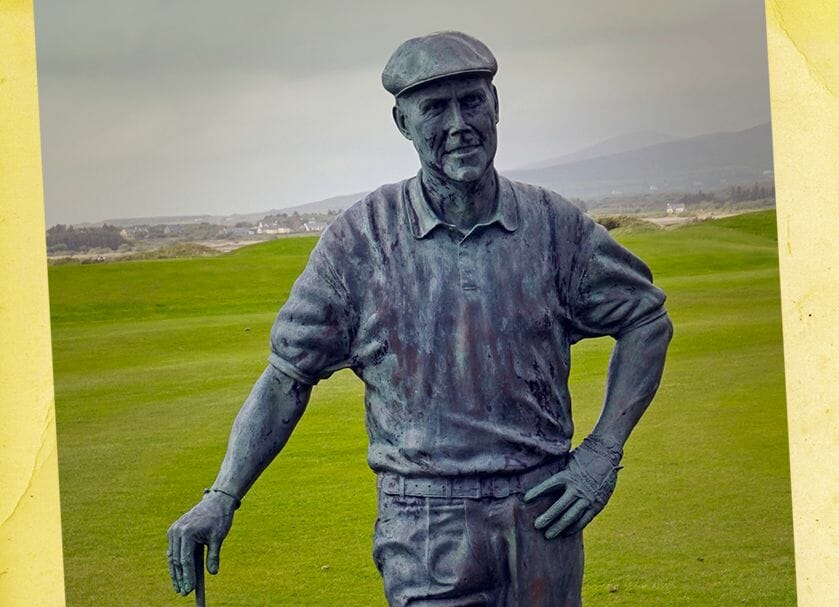 The Payne Stewart statue at Waterville

The prolific Old Tom Morris designed or remodelled some 75 golf courses – many of them now rated among the greatest in the world… try Royal Dornoch and Royal County Down for starters. On that list is the original links at Rosapenna (now called Old Tom Morris), which he visited in the early 1890s. A statue of Old Tom, setting up to hit a shot, sits beyond the clubhouse overlooking his back nine, which streaks along the edge of Sheephaven Bay. The way Old Tom is setting up to the ball you get the distinct impression he’s still keen to play them. His visit to Donegal took him passed Lough Salt, close to Termon, Co. Donegal, where legend says he hit 20 gutta percha balls into the lough. Their value today is estimated at €25,000. Each.

Other statues include Nick Faldo at Lough Erne, Seve Ballesteros at The Heritage, Jack Nicklaus at Killeen Castle, and Arnold Palmer at Tralee. 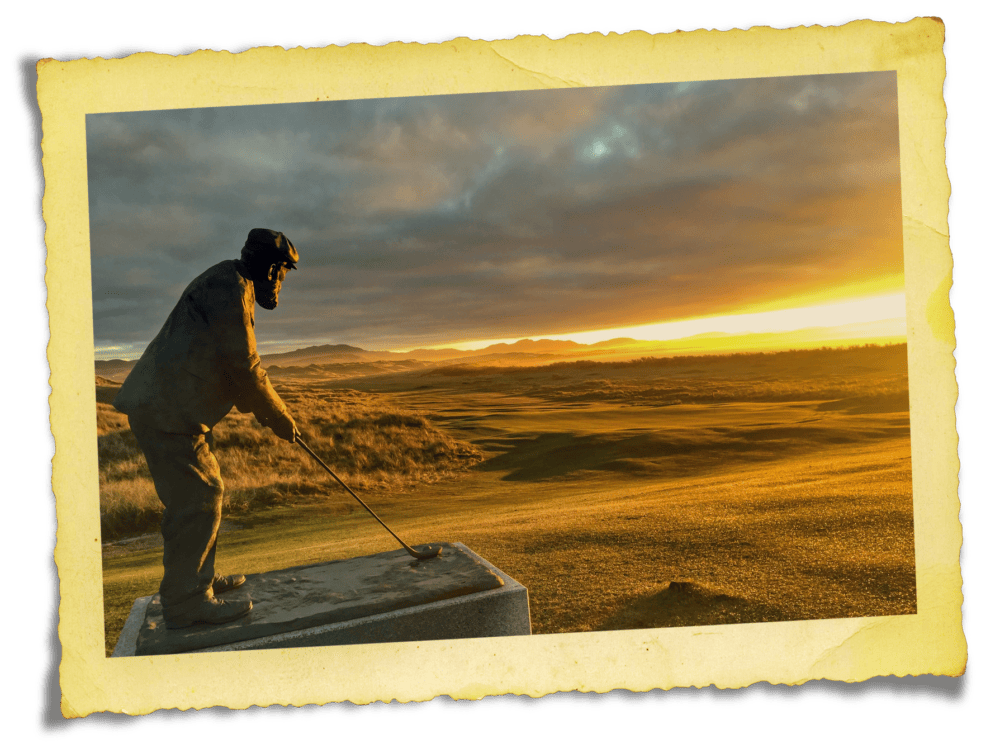 The golf course flows over a cliff-top peninsula and, as one of the most stunning settings for a golf course anywhere in the world, some would say the location alone is iconic.  But it is the imposing sight of the lighthouse, which arrives on the acclaimed 4th hole, that really puts a stamp on where you are. The concentric tower sits out at the farthest point, perched above the 18th tee and peering across at the 4th green, wedged on the cliff tops. The current lighthouse was built in 1853 (others were positioned elsewhere on the headland, as long ago as the 17th century) and it stands 30 metres tall. Originally painted in red and white stripes, this changed to black and white in 1930. It became fully automated in 1987. Its light has a range of 20 nautical miles which means it was within view of the RMS Lusitania when it was sunk by a German U-Boat, 11 miles off the Cork coast in 1915. 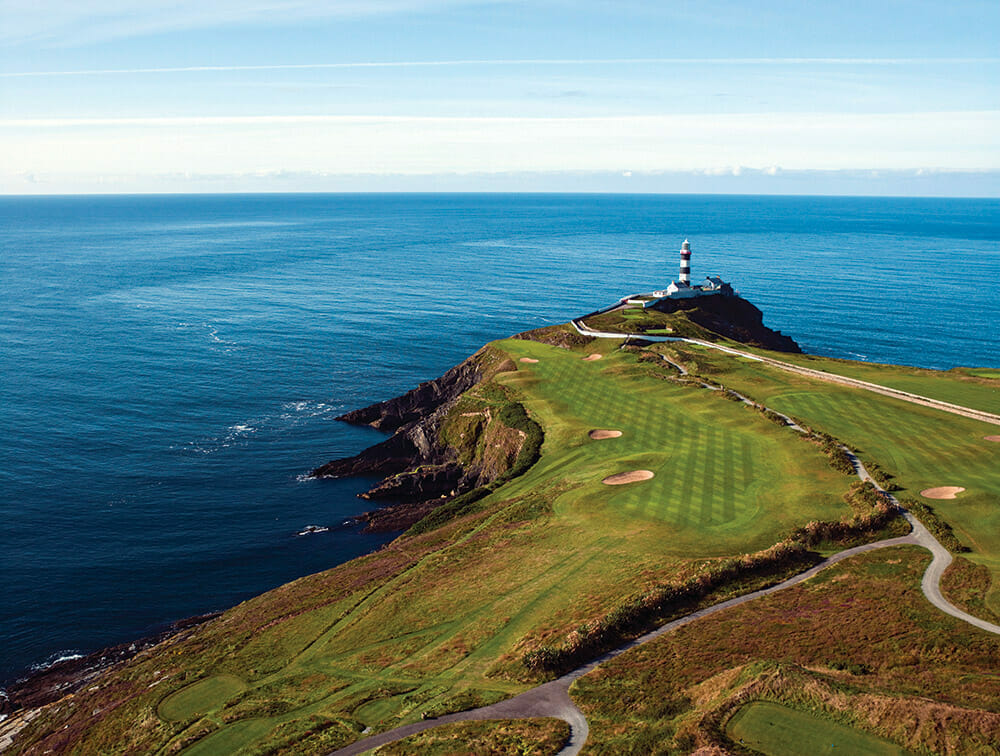 In 1919, John Alcock and Arthur Brown completed the first ever non-stop transatlantic flight when they landed on Derrygimla Bog, in Ballyconneely. They flew for 16 hours in a modified Vickers Vimy bomber. Their landing site is two miles from the golf course but, in a 2005 re-enactment, Connemara’s 8th fairway was used as a runway when adventurer Steve Fossett flew a replica Vickers Vimy plane on exactly the same route. Fairway humps and hollows were levelled to ensure a smoother landing and a commemorative plaque can now be found on the fairway, at the spot where they touched down. Be sure to visit it when you play this wild and entertaining links. 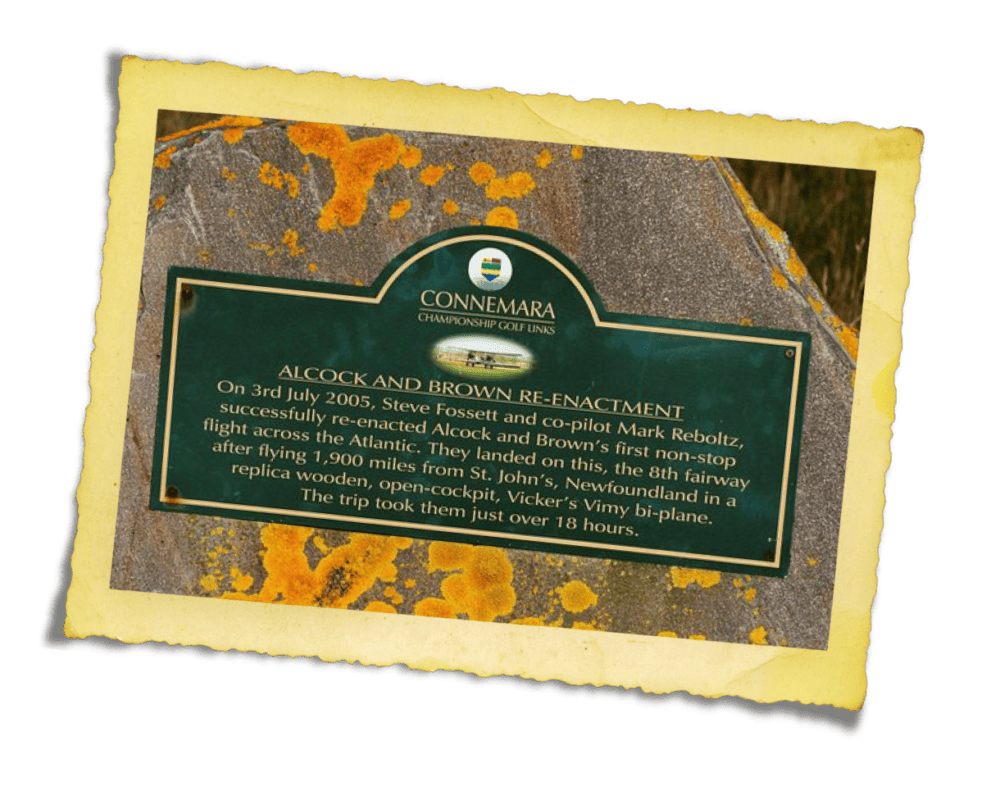 The Poolbeg chimneys in Dublin stand over 200 metres above the city, visible from everywhere and from over a dozen golf courses. Built in 1971, and de-commissioned in 2010 (they were granted protected structure status in 2014), the two red and white striped towers are eye-catching from miles around… most particularly on Bull Island, home to Royal Dublin and St Anne’s golf clubs. If you play a round at either club and you are accompanied by a member, don’t be surprised if the two towers are suggested as your ideal line, time and again.

It’s also worth mentioning two other sights at Bull Island: one is the island itself, which came about thanks to Captain ‘Mutiny on the Bounty’ Bligh who conducted the first full survey of Dublin Bay, in 1800; and the wooden bridge (Bull Bridge), which joins the mainland to the island, at Royal Dublin Golf Club. It was built in 1907 and remains almost entirely in its original state. 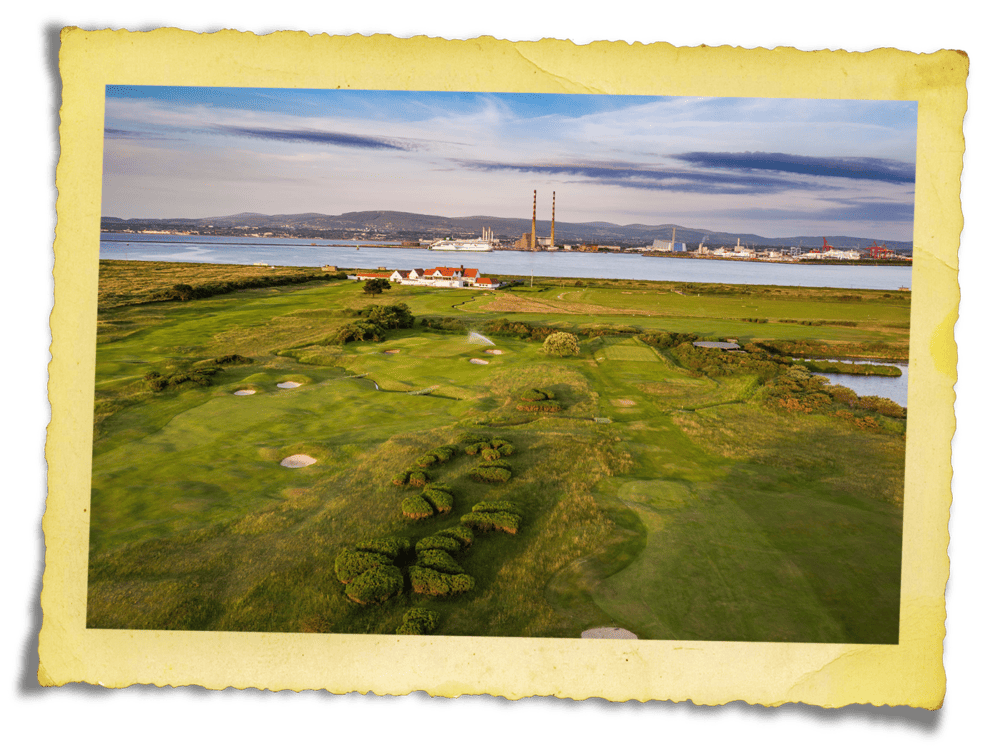 Regarded as one of the best golf links in the world, let alone Ireland, The European Club is also a tough beast of a course. Never mind the design and shape of holes, it is the mere sight of the bunkers that strikes fear into the heart of every golfer. This Pat Ruddy masterpiece is renowned for the railway sleepers that line each and every one of the 90 bunkers. It is the only course in Ireland to employ sleepers and to call them intimidating is an understatement. Some rise above your head they’re so tall but their use is not new. As Pat has noted in the past:

“The sleeper has, of course, been a part of links design in Britain and Ireland ever since the days that golfers went to the club by train and the railway companies donated their old sleepers to the golfers.”

And, to be frank, a bunker is a hazard to be avoided. Pat has relented in recent years and removed sleepers from the back and sides of many bunkers but your forward progress is never going to be easy. 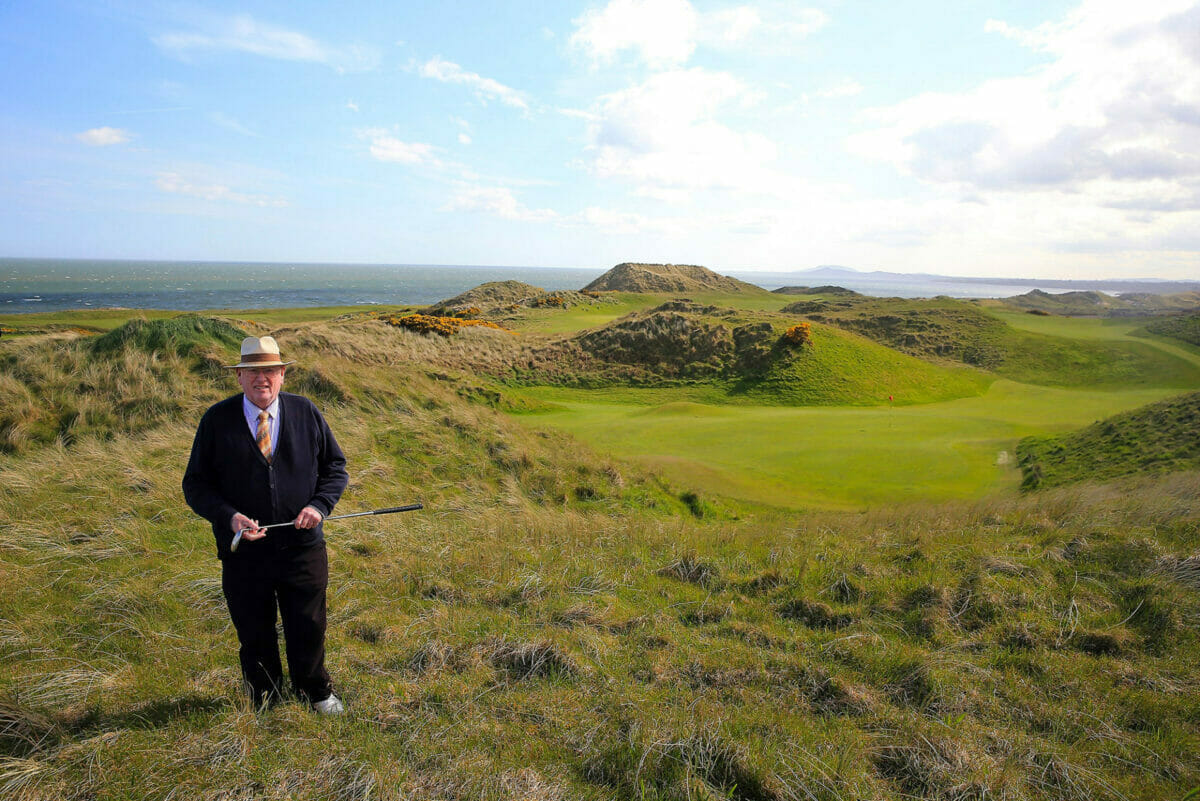 Pat Ruddy stands behind the 8th green at The European Golf Club on May 2, 2013 in Brittas Bay, Ireland. (Photo by David Cannon/Getty Images)

There are plenty of golf courses with deer roaming their fairways but only at Killarney do they remain there for the entire day, typically unbothered by golfers and immune to your roars of ‘Fore’. It matters little which of Killarney’s two courses you play because the deer are free to roam through the 26,000 acre Killarney National Park, which butts up to the golf club. And deer pay little heed to boundaries. 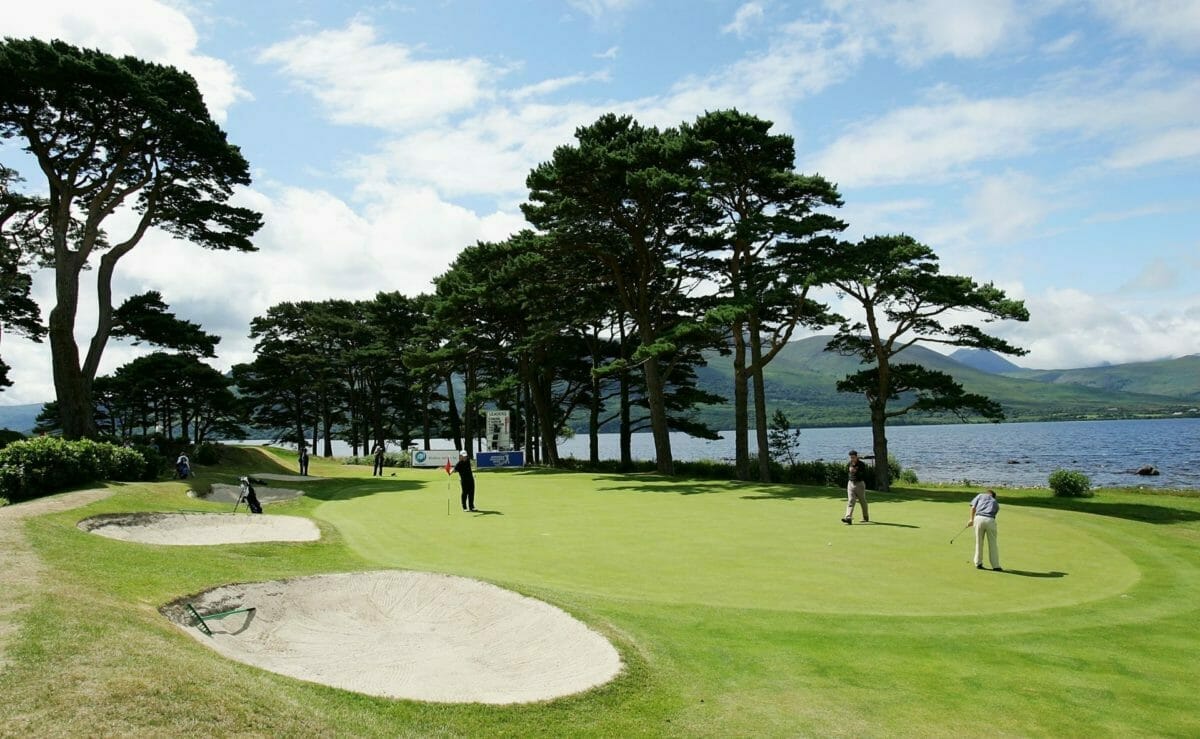 Lahinch’s goats are legendary. They are an essential part of this famous club’s folklore: not only do they possess weather-forecasting abilities but they are extremely talented in the art of hide and seek. Many a golfer comes off the links disappointed not to have seen them but, on the plus side, their non-appearance suggests fine weather for golf. And now those golfers can enjoy the company of a new goat beside the 1st tee.  As part of Lahinch’s 125th anniversary celebrations, a bronze ‘goat rampant’ sculpture was designed by renowned Sculptor, Seamus Connolly, and unveiled last summer. 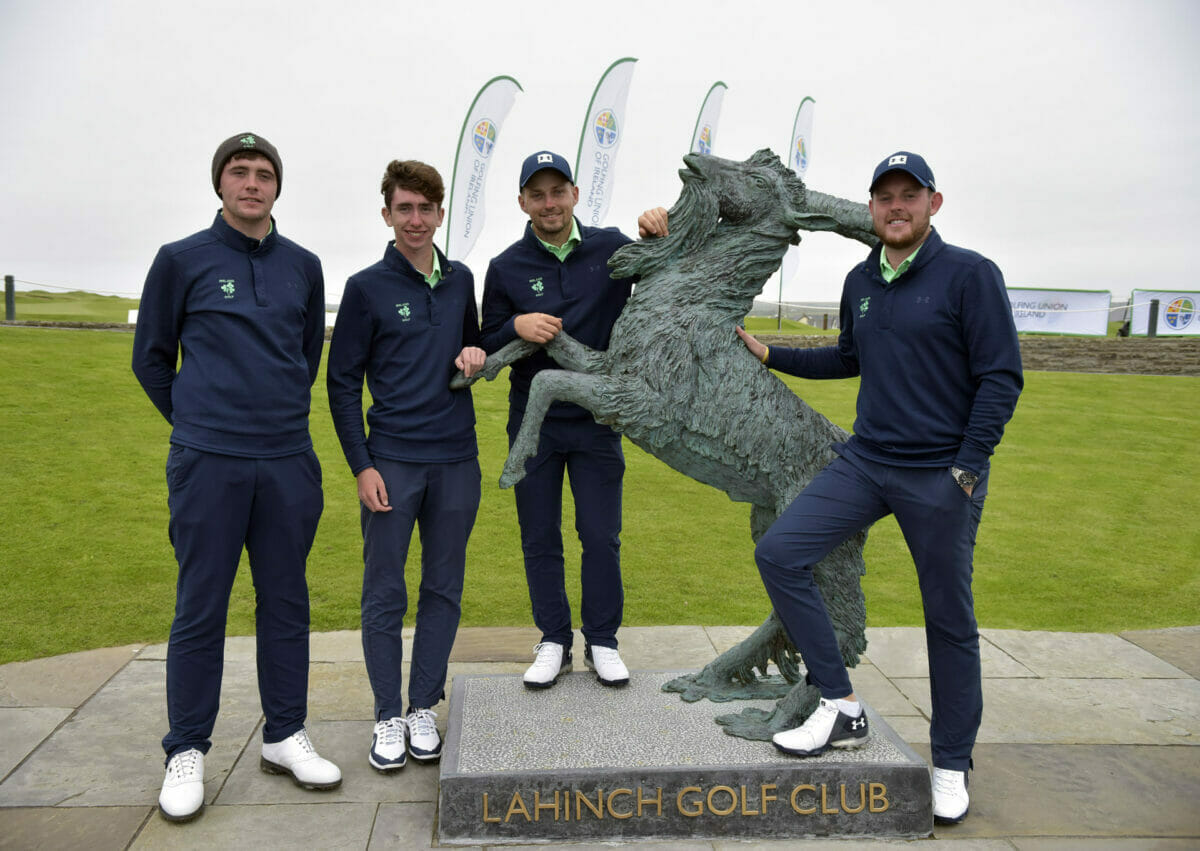 Let’s forget that Royal County Down is often rated the best golf course in the world*, and that the backdrop of the Mourne Mountains is one of the most beautiful settings in the world. Instead, let’s talk about the Slieve Donard Hotel, next door to the golf course and built in 1898 (at a cost of £44,000). Its striking Victorian red brick construction makes it stand out in the small town of Newcastle, but it is the tower that rises above the hotel and the trees that cements its iconic status. And the reason for that is simple: you play the first three holes beside the sea, leading you away from town; and then, when you turn to play the world-class par three 4th, you’re looking straight back down the course at the tower and the Mourne Mountains above. You get a closer view of it all when you come over the dune-top on the par four 9th… another world-class hole.

* The US magazine Golf Digest released its biennial ‘World’s 100 Greatest Courses’ recently and the Northern Irish links is ranked Number 1. Three other courses on this list also make the top 100: Lahinch at 34, Waterville at 55, and Old Head at 83. 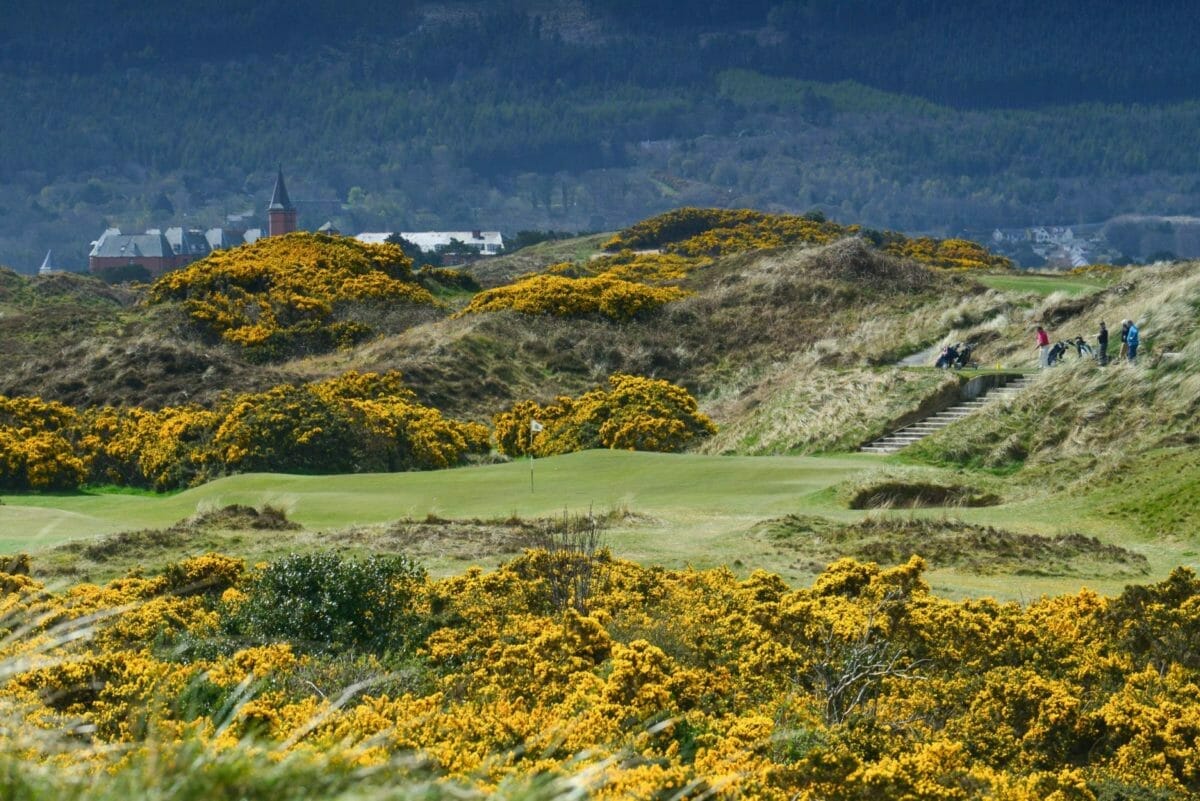 Ardglass, in Co. Down, boasts the oldest clubhouse in the world. I know I said clubhouses weren’t for this article… but this one dates back to 1377. That is the year that Horn Castle, which sits directly behind the 1st tee on the water’s edge, was built. It forms part of the club’s facilities and is on full show from the 1st green and 18th tee. You’ll also have canons pointed at you as you try to drive over a rocky shoreline on the opening hole. Try not to be intimidated. 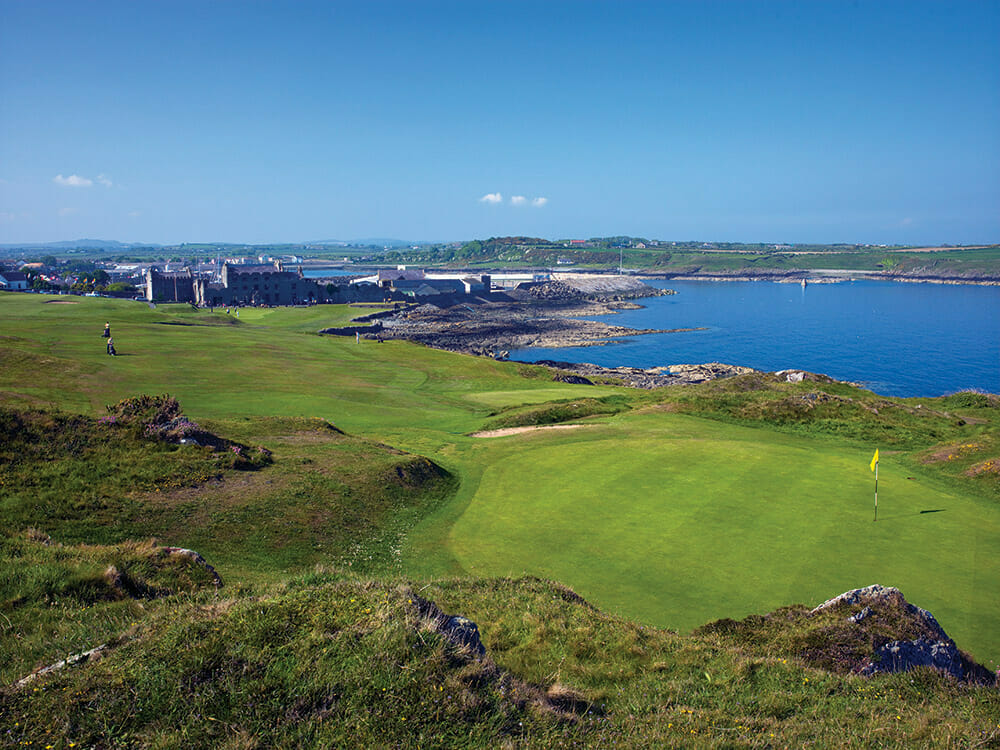