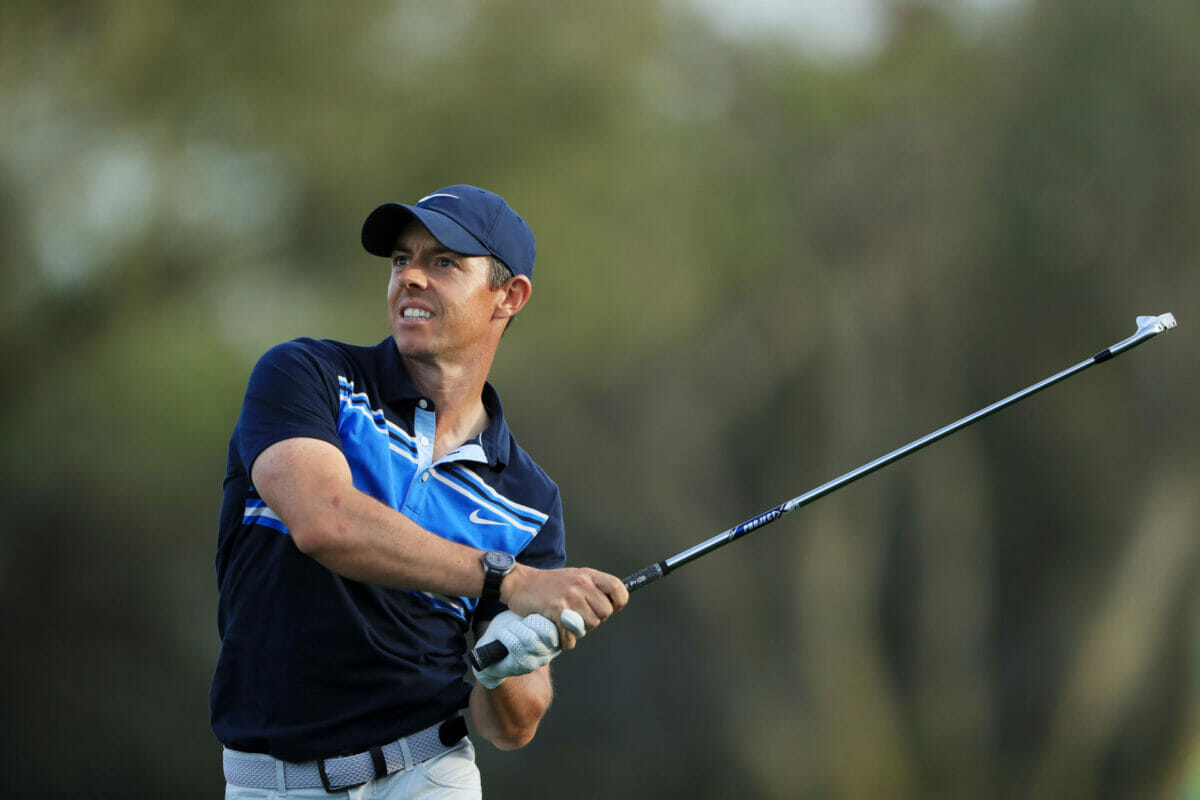 Rory McIlroy lived-up to his World No. 1 stature in leading he and playing partner, Dustin Johnson to an ‘extra hole’ victory in the TaylorMade Driving Relief charity skins match at Seminole in Florida.

McIlroy and ‘DJ’ teamed to defeat Rickie Fowler and Matthew Wolff but only after 18 holes when the match went into to a nearest to the pin contest at the par-3 17th hole of the famed Donald Ross designed course.

However, the final hole was halved sending the first PGA Tour event in 66-days into an extra hole with McIlroy, who teed-off last, throwing both arms in the air knowing his shot was closest to the pin.

The effort took McIlroy and Johnson’s ‘charity-raising’ efforts to $1.85m for the American Nurses Foundation with some $5.5m raised overall in the Coronavirus fight in the badly pandemic struck U.S.

“I didn’t know whether to tell it to get up, get down, stay long or stay short,” said McIlroy.

“I wouldn’t be known for my wedge play, so I was feeling a little pressure there.

“Matt (Wolff) hit a decent shot in. It’s only 120 yards but it’s a tough shot and just to see it land on the green and stay there because on these Seminole greens the ball can do funny things when you think it’s in a good spot.

“I’m just really happy, it was an awesome day playing with DJ, Matt, Rickie, all of us out here for a great cause. It’s been awesome and it was nice to get back on the golf course and get back to some normalcy.”

While the golf world waited with baited breath for a first glimpse of the famed Seminole club, the sight also of four of the world’s top players contesting a PGA Tour sanctioned event wearing shorts and carrying their own clubs was also worth the some two-month wait since the cancellation of the Players.

Each team began with $500,000 but after pars at the opening two holes, McIlroy ‘tongue-in-cheek’ reminded 21-year old Wolff of his ‘place’ at the second hole when Wolff celebrated holing a par-save.

Fowler won the fourth with the first of five birdies for the current World No. 27 to boost he and Wolff’s earnings to $550,000 while ‘DJ’ birdied the next to bring their charity total to $750,000.

Fowler boosted his team winnings by a further $100,000 with a second straight birdie at the 12th hole, after McIlroy’s birdie putt lipped out.

The 13th hole was halved and all four birdied the par-14th and then walked off 15 with a halve before McIlroy played a super chip shot to ‘gimme’ distance at the 16th only for Wolff to halve the hole.

Seventeen was also halved in pars ensuring $1.1m on line at the par-4 18th but, as mentioned, the last hole was also halved moments before McIlroy stepped-up to produce his Seminole slice of success

Sunday’s contest was the first televised golf competition since The Players Championship in March, before the PGA season was cancelled on Thursday March 22nd.

Next up is Tiger Woods, Phil Mickelson, Tom Brady and Peyton Manning taking part in an exhibition match next Sunday in Capital One’s “The Match: Champions for Charity” just up the road at the Medallist Club.