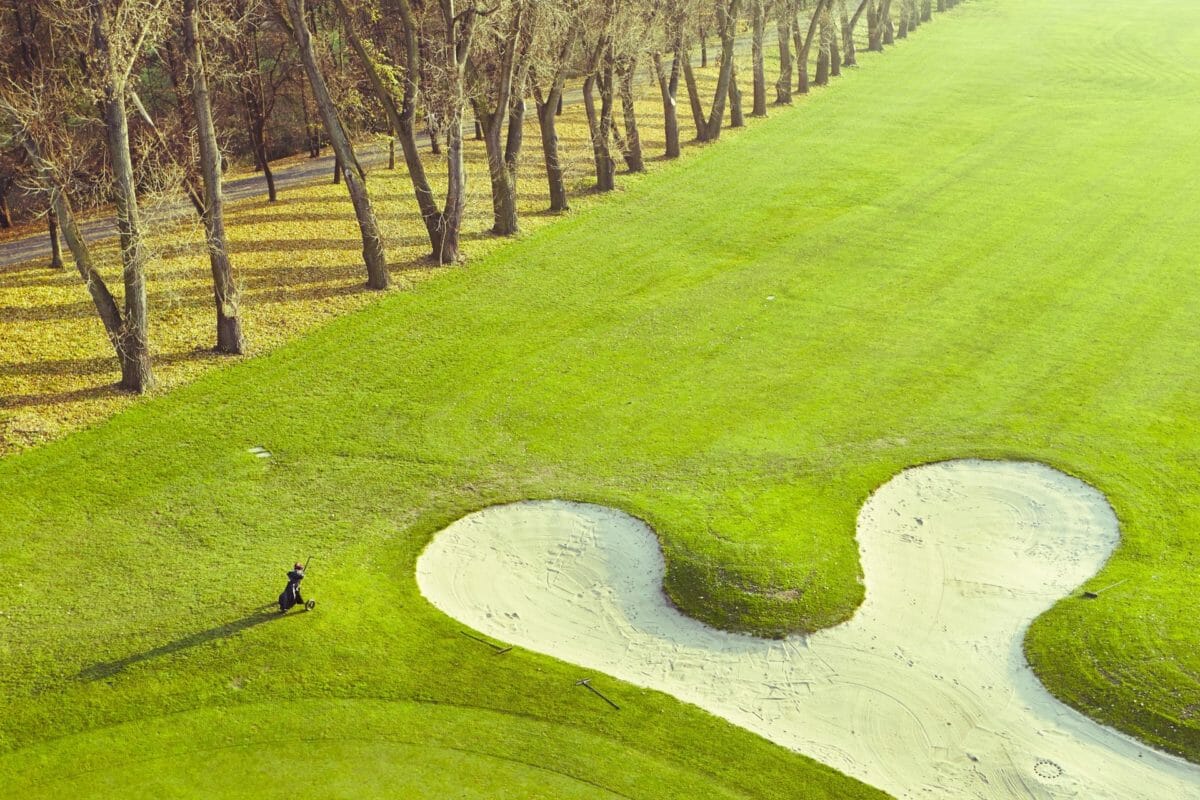 Have you found yourself daydreaming over the past few weeks of what might be happening behind the closed gates of your local golf club? With space abound and people absent, I envisaged wildlife roaming free, wildflowers blooming in the rough and divot-less fairways mown in chess board stripes lying in wait for my return. What I didn’t consider was a couple bringing new meaning to a plugged lie but I can’t get the image out of my head now.

That’s because the Glenbervie course in Stirlingshire, Scotland has revealed that a couple was spotted having sex in one of its bunkers. The course had appealed to its members to keep watch after various degrees of damage was caused in recent weeks by dog walkers and cyclists on site. However, the volunteers swiftly got more than they bargained for when they noticed the grounding of an unusual club in one of the hazards.

“It’s been open season on Glenbervie since the lockdown came in,” said one member to local news. “Nobody minds people taking a stroll round the course but this isn’t Butlin’s.

“It’s frustrating that members aren’t even allowed to get their daily exercise by playing a round on their own in the fresh air yet you’ve got locals having sex in the bunkers. Where’s the social distancing in that?”

Well, assuming they were from the same household, no social distancing is necessary but there is, of course, a far greater concern that needs to be addressed if this sort of behaviour is to continue, and that’s the issue of sand.

With membership fees at Glenbervie coming in close to £1,000, I’m sure there was no shortage of it and this coupled with the dry weather means the lie would’ve been fluffier than usual – all well and good for comfort levels throughout the mating ritual but anyone who’s been to Butlin’s knows that sand in the crack is hard to get out.

If you’re going the right way about this, you’ll seek compact sand to promote stability, preferably in a deep pot bunker to maximise privacy too. Links courses offer panoramic ocean views and there’s nothing quite like a violet sunset glistening over the horizon line to kindle that romantic flame. I’d recommend one of the more exclusive golf courses in the country where some bunkers even have stairs fitted into them meaning whether you’re 17 or 70*, accessing the trap isn’t the issue, but getting up and down might be.

And for god sake, bring a rake with you. If not for your fellow swingers, for the sake of the trainee greenkeeper still coming to terms with the arse imprint he stumbled upon the next morning. Two-stroke penalty for that… and four Hail Marys and two Our Fathers for the rest of it.

*Disclaimer – Over-70s should be cocooning. Should over-70s wish to engage in sexual activity, we would strongly encourage them to stay at home to do so