No shame in choking 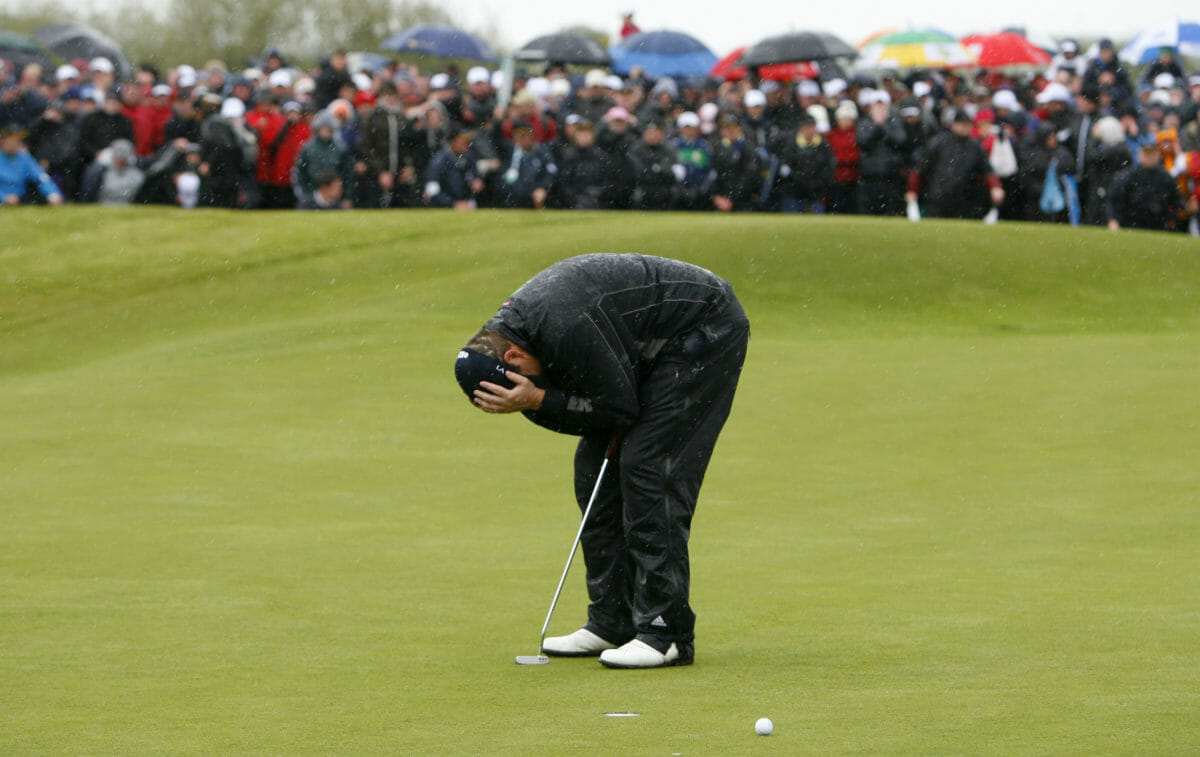 Irish amateur Shane Lowry reacts after missing a putt on the 18th green during the final round of the Irish Open at Baltray in County Louth, Ireland on May 17, 2009. Lowry played three playoff rounds to against England's Robert Rock to win the Irish Open. AFP PHOTO/c (Photo credit should read PETER MUHLY/AFP/Getty Images)

Why is missing a ‘sitter’ at golf less forgivable than in other sports?

Watching the likes of Jonathan Sexton, Ronan O’Gara or Wayne Rooney missing the ‘proverbial’ and still being lauded highlights that golf might be the only game where one’s misses have exactly the same value as the ‘good ones.’

A footballer can miss several opportunities to score but if he sticks in the winner – that’s the one that counts and all that matters. In golf, every stroke, good, bad or indifferent played is counted and is the affirmation or destruction of all of the strokes that went before.

All golfers are prone to muscles tightening and the body freezing under pressure brought on by the growing tension that sneaks up almost unnoticed at the end of a round. Some cope better than others. The horrible word ‘choke’ turns up in conversations in golf clubhouses far too often. It could be one of the reasons why so many golfers decline to play on Club teams. Choking implies weakness and cowardice but it is misplaced on somebody who has shown the courage to strive to get into a winning position in the first place.

The effects of pressure are real and unavoidable. From 8-feet the best pros manage to hole out a mere 50% of the time. When you miss an 8-footer under pressure, people are quick to say: ‘he choked.’ In reality, the putt may have been struck perfectly but the law of averages went against the player, plus the tiniest of misreads can cause any putt to miss.

Padraig Harrington’s last putt to win The Open felt exactly the same to him as the club amateur facing a similar situation to win an inter-club match. It’s the lack of familiarity with the situation that causes the anxiety. Stress, especially when one is not used to it, can be so tough psychologically that we lose control and do not think clearly or perform as normal when executing a relatively simple task.

A ‘choke’ occurs when the brain interferes with the process of playing a particular shot. The problem is not a lack of concentration or courage but too much analysis or conscious thought disrupting a physical act that is normally second nature. It’s one of the most perplexing things that can happen to a golfer.

When you boil it all down it is the nature of team sports versus individual sports. Many a footballer has won a treasured medal without ever doing anything significant as an individual. In golf, it is all your own work! Choking isn’t the worst crime in the world. Some of golf’s toughest personalities have choked at vital times. It only means that one must have been doing many things right before it all went wrong.