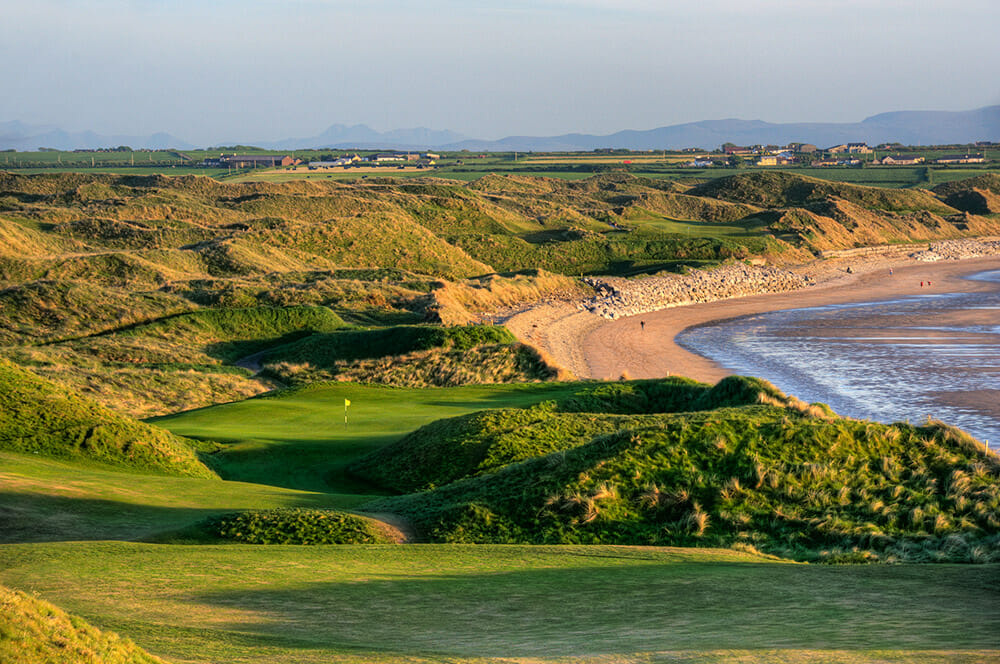 When GUI President-in-waiting, Commander George Crosbie of Cork, ‘bulldozed’ his colleagues into bringing the 1937 Irish Close to a previously ‘unknown’ Ballybunion, nobody could have anticipated the subsequent, resounding success of the 1937 championship or that it would be won by a 17-years old future legend, James Bruen.

The club committee with two years advance notice but extremely limited funds, managed to entice an aristocratic, Englishman whom they heard on the grapevine might be indifferent to the fees he could earn to advise them? Tom Simpson was born into a wealthy English mining family background. Financially secure, Simpson enjoyed the luxury of turning an interesting hobby into a career that has left indelible marks on many famous golf courses. Today, Simpson’s golf designs are recognised as being as artistically inspiring as any in the history of the game.

Trained in law at Cambridge University, Simpson qualified as a Barrister but never practiced. He was a respected art critic whose sketches often featured in Bernard Darwin’s Country Life articles. His favourite hobby was needlework and he was also a collector of exotic cigars, Persian rugs, walking sticks and wines. Tom Simpson always arrived for work in a chauffer-driven, silver Rolls Royce while dressed in a flowing cloak, a Basque-like beret and wielding a riding crop. The chauffeur doubled-jobbed as a valet, who drove the impressive automobile onto an appropriate fairway to serve a Fortnum & Mason’s luncheon from an enormous wicker basket.

Unlike Pete and Alice Dye, there was no dining with the humble construction crew for Simpson and the lady who always accompanied him on assignments. She was Miss Molly Gourlay, an outstanding golfer in her own right, twice English champion and the future President of the LGU, who was the insensitive person who instigated the change of badge on the Curtis Cup team’s blazer that caused ‘an international incident’ and the refusal of the Irish champion at the time, Miss Philomena Garvey, to take part.

The unlikely pair were strictly business associates but the Ballybunion committee thought they were man and wife. Inspiring one local wag to erroneously dub the two bunkers that lurk in the middle of the first fairway that catch careless tee shots, ‘Mrs. Simpson’s’.

By all accounts, Simpson had a superiority complex as far as golf committees were concerned. The fact that his clients only rarely handed over any hard cash saved him from being dismissed and thrown off properties on several occasions. Simpson’s feelings of being ‘bulletproof’ meant he rarely paid attention to what the course development committees wanted, was impervious to any suggestions or being told what was wanted.

Compared to less talented designers of the classical era, Simpson’s work tends to be forgotten. Accepting ‘too many’ redesign jobs in order to ‘correct the mistakes’ of others, as he termed it, did not endear him to his peers. As a consequence, Simpson’s work was not given the respect it deserved during his lifetime. If referred to at all in contemporary writings, it was usually as ‘the eccentric Simpson.’ But, Simpson is seen as an unsung hero of golf architecture today whose name deserves to be mentioned alongside Harry Colt and Alister Mackenzie.

Simpson’s greatest ‘gift’ to Ballybunion was realising that the links did not require ‘much correction’ and that nature could not be surpassed. In fact, he only suggested a few minor adjustments. He relocated three greens, the 7th then the 2nd, the 9th then the 4th, and the 13th then the 8th – as well as introducing some new bunkering. He left the routing and shape of the holes more or less as they were.

If he had worked more often on original routings on virgin land, there is little doubt that Tom Simpson would be better known and appreciated today. It is unfortunate that a haughty attitude stirred up such strong feelings that his reputation and legacy are largely ignored and forgotten because Tom Simpson’s judgement was sound and, of course, having to live through two world wars did not help his productivity.