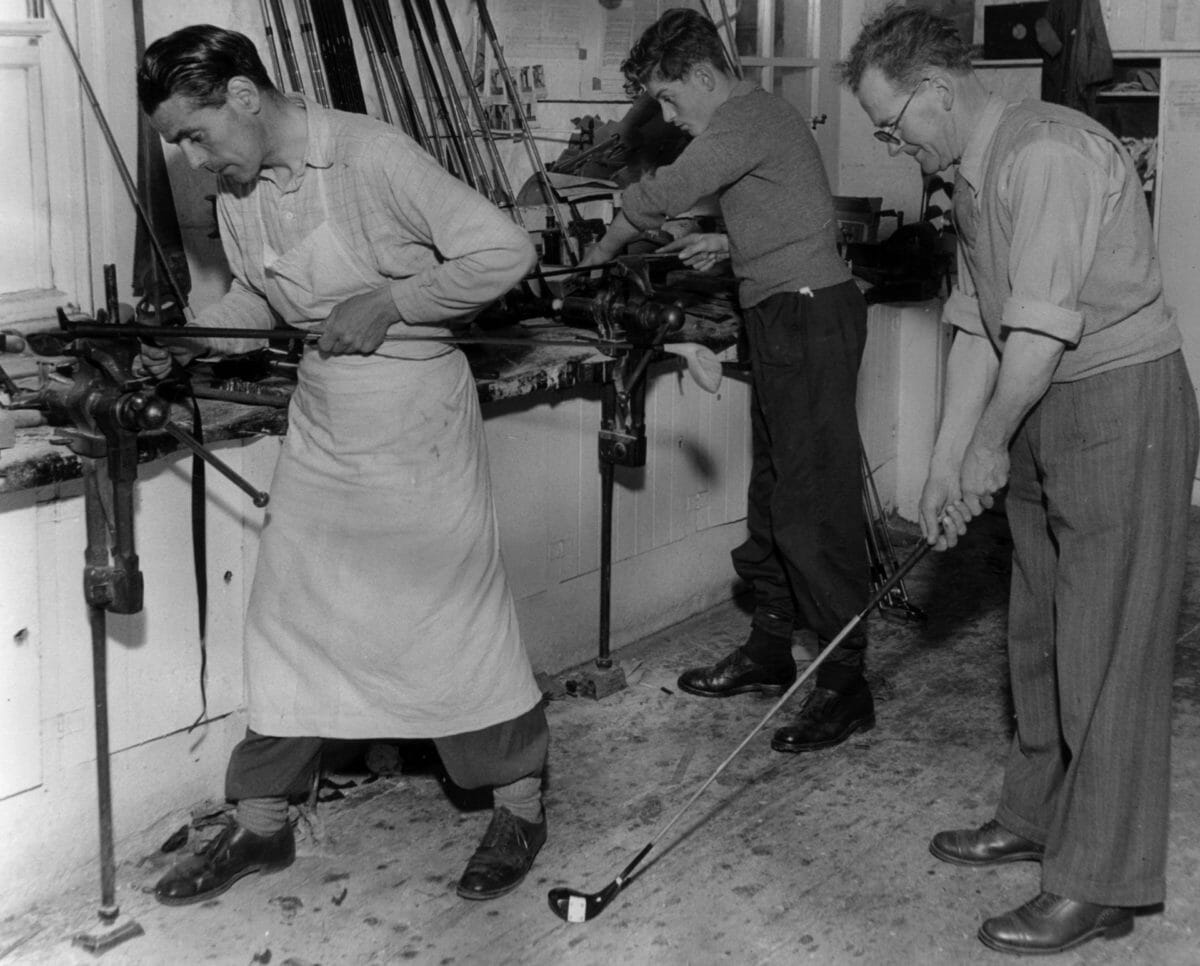 For over 500-years, 1400c-1936, golfers carried as many clubs as they wished although until the arrival of the American (Haskell) ball in 1900, they rarely carried more than seven or eight clubs – i.e. a 10º Play Club (a driver today); a 13º Brassie or 16º Spoon for long shots from the fairway; 20º Cleek, 30º Mashie Iron; 40º Lofter, a Rutter Club for playing recovery shots from bunkers and the bad lies that were prevalent on the less than manicured ground golfers played over prior to the 1900s plus a putter for holing out on greens that wouldn’t pass for fairways these days.

The Haskell ball was a breakthrough invention. Typically, it came about accidentally. Coburn Haskell of Cleveland, Ohio arrived unannounced in the office of his friend Bertram Work, chief operations officer of the Goodrich Tire & Rubber Company on a hot summer day in 1898. While chatting Haskell absentmindedly picked up some waste rubber thread and wound it tight. When he bounced the mangled mess, it flew upwards and crashed into the ceiling. Both men were so startled they immediately began discussing how to put a cover on the wound rubber to see if it would fly?’

After some months of experimentation, the Haskell ball was born. As instantaneously as when the gutty replaced the feathery, the Haskell put the gutty ‘out of business’. The Haskell flew so far it profoundly impacted the way the game was played, increasing the distance that could be achieved with individual clubs from 10-yards to 30-yards. To fill the large gaps, suddenly 14-clubs (or more) were needed. Soon, irons called: Mid-iron, Deep Face Mashie, Mashie, Spade Mashie, Mashie Niblick and Niblick were introduced. The sand wedge came later in the 1930s. The Haskell ball lasted right up to the 1970s when manufacturers began experimenting with synthetic materials.

In 1935, the average number of clubs carried by competitors in the Open Championships in GB or USA was 18. Bobby Jones carried 20-clubs during his Grand Slam Quadrilateral in 1930; Harry Lighthouse Cooper was known to employ 36 clubs, weighing 95-lbs on occasions. Lawson Little, winner of both US and British Amateur Championships back-to-back in 1934 and 1935, must have ‘broken the back’ of his unfortunate caddy who had to shoulder his 26 clubs. That torture finally brought an end to it! The USGA and R&A were prompted to bring some sanity into the picture and after lengthy discussions decided (in 1936) that 14 would henceforth be the appropriate number allowed.

In the first half of the 19th century golf was steadily increasing in popularity. Fairways were rough and ready by the standards of today; greens were hardly much more than 18-feet wide. The extra footfall around the hole, which was rarely changed, caused untold damage, which gave the best golfers of that period, Allan Robertson and Old Tom Morris, fits. Because the rules at the time stated you must tee up your ball (without a tee as we know it today) within one club length of the hole the greens were hacked to bits. Some wet soil or sand that was often sourced by sticking a finger into the side of the hole, was used to tee the ball. Consequently, the hole got bigger and bigger as the days wore on. Old Tom called ‘foul’. As Keeper of the Green at Prestwick he incrementally stretched the teeing place to two, four and, in 1858, eight club lengths away until in the late 1860s, Old Tom’s son, Young Tom, talked his father into asking for permission to build larger greens, with new holes cut in different positions once a week and dedicated, flat teeing areas well away from the edges of the green.

Soon, the authorities at St. Andrews and Musselburgh followed suit and these developments saw scoring improve and how the game was played began to change as the standard of putting improved enormously. Whereas, Old Tom regularly missed short tap in putts, Young Tom never did.

The secretary at Musselburgh, Sergeant Scott, was instrumental in regulating the size of the hole in the 1880s when he instructed his green keeper to pay closer attention to the manner in which he was cutting the holes. The assistance of a Blacksmith and member, Robert Grey, was sought. Grey advocated using a cut down drainpipe as a liner to keep the sides of the holes from collapsing and to prevent the golfers from taking bits of sand and soil for use as tees. it just happened that the drainpipe selected was four and one quarter inches in diameter. This latest innovation caught on and, in 1891, the size of the hole was stipulated in the rules for the first time.

Finally, the hole makes golf different to all other stick and ball games and the flag stick only became commonplace as a directional guide in the 1880s after the greens and teeing ground were clearly defined in the rules.